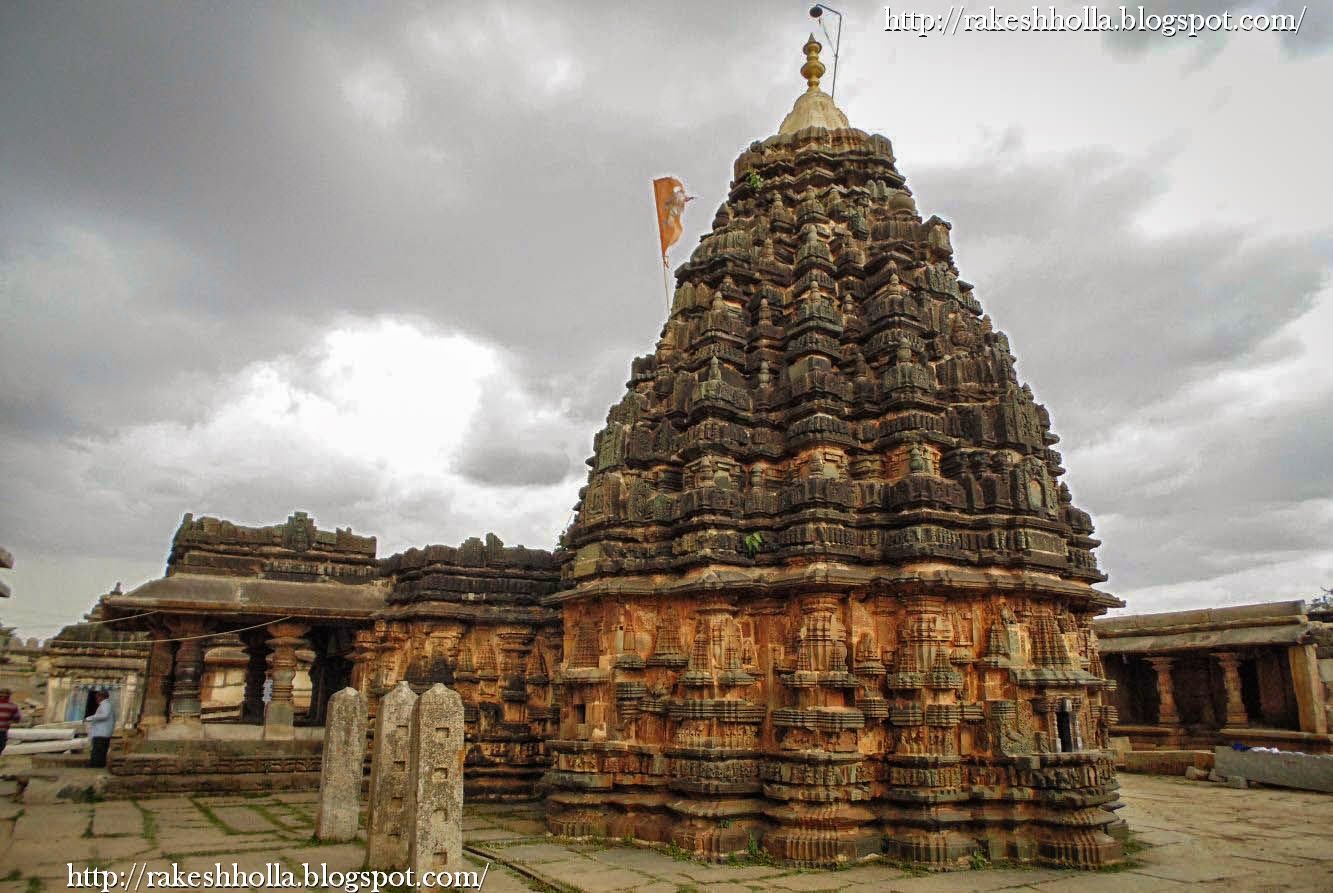 Lakshmeshwar a small city near Gadag represents the high point of an eclectic art which, in the 6th and 12th centuries under the Chalukya dynasty, achieved a harmonious blend of architectural forms from northern and southern India. An impressive series of 4 Hindu temples, as well as a Jain sanctuary, can be seen there. 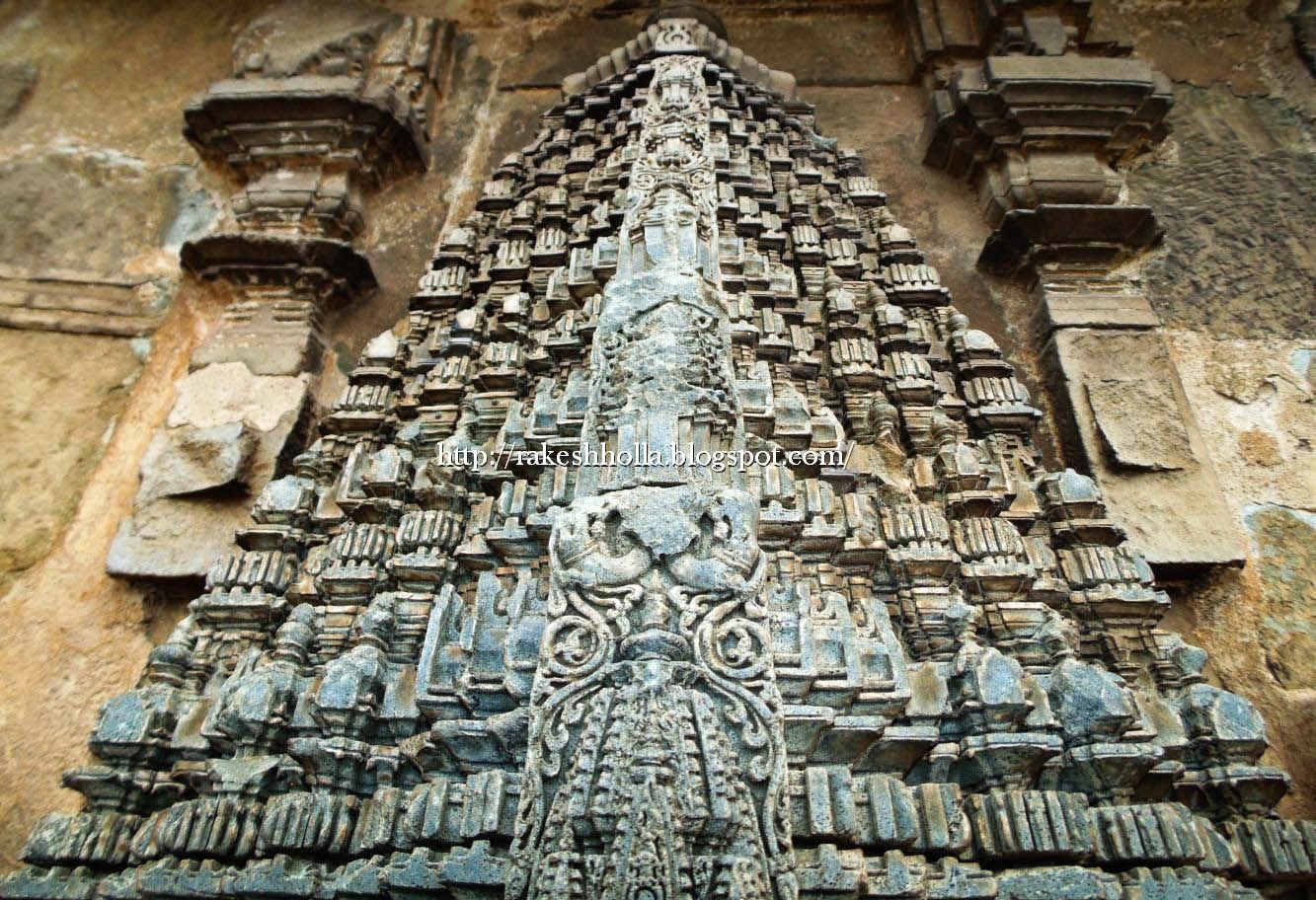 Somesshwar Temple flourishing religious center during the days of the Chalukyas. As per an inscription dated 1102 CE where god is referred as Muddesvara and later the god is referred as Svaymbhu-Somanatha or Dakshina-Somanatha. Earlier Lakshmeshwar was known as Purigere, Puligere, Hurigere, Huligere and Purika-nagarat. There are more than fifty inscriptions found in and around Lakshmeswar. The earliest reference of the city comes in an inscription of the time of the Badami Chalukya king Pulakesi II (610-641 CE). After the Badami Chalukyas, it came under the Rashtrakutas ruling from Manyakheta. One inscription of the Rashtrakuta king Dhruva (780-793 CE) is found here. After the Rashtrakutas, Western Gangas ruled over this region. Three inscriptions of their dynasty are found here, all belonging to king Marasimha II (963-975 CE). After the Western Gangas, Lakshmeswar came under the Western Chalukya dominion. An inscription at Annigeri informs that the Cholas invaded the Western Chalukya dominion during the reign of king Somesvara I and ravaged southern provinces and destroyed the city of Pulikara-nagara, (Lakshmeswar). The inscription asserts that the Chalukyas defeated the Cholas and stopped further incursions. 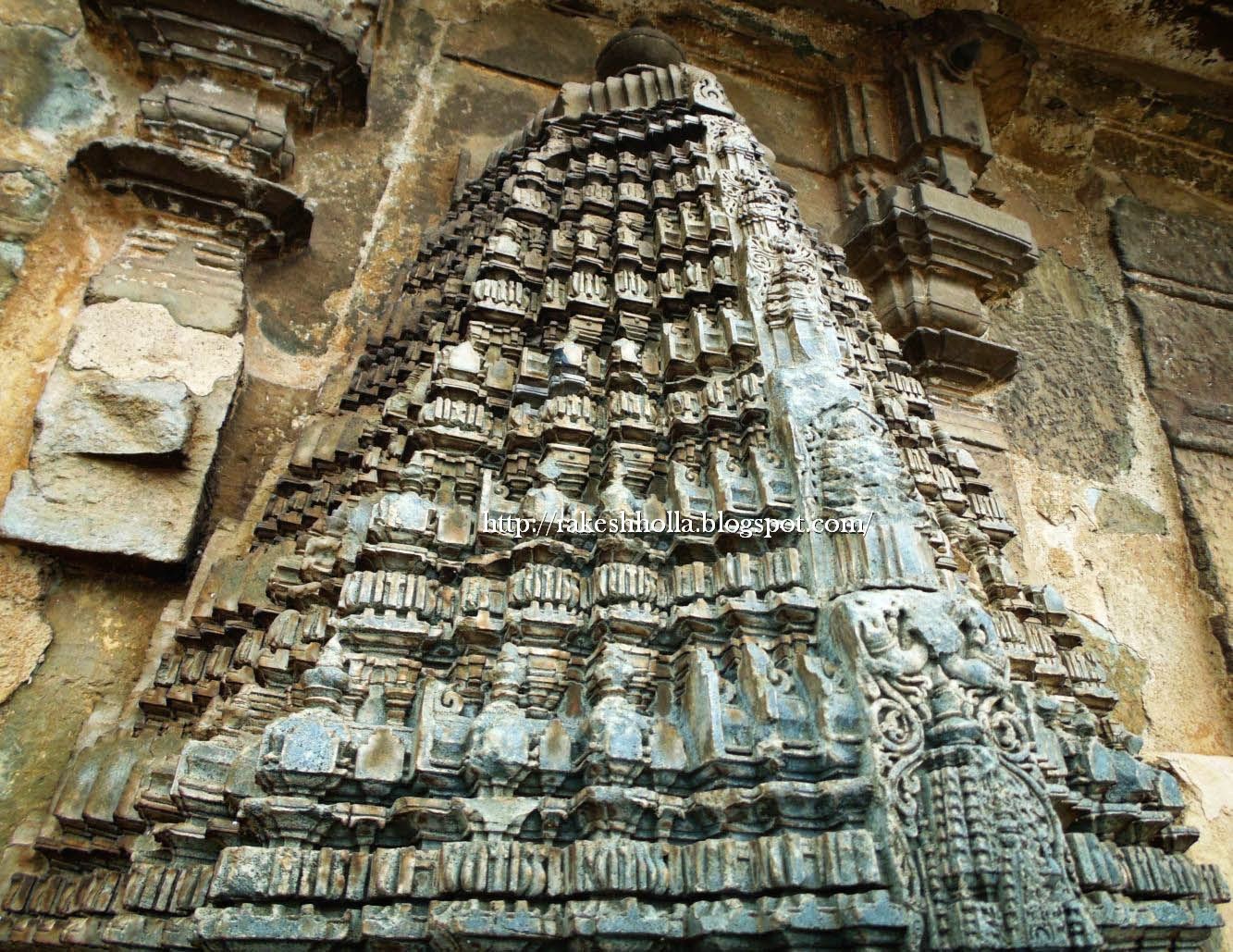 Lakshmeswar was the capital town of Purigere-300 division. First reference of Purigere comes in the Rashtrakuta inscription however it is not referred as Purigere-300. Its first reference as Purigere-300 is from the times of the Western Chalukya kings. The Kalachuris governed the region as the feudatories under the Western Chalukyas. A Brahmapuri was established during the reign of the Kalachuri king Bijjala in 1166 CE. After them it was the Suenas and after them the Hoysalas. Many Suenas inscriptions are found here but no Hoysala inscription is found. In the last the town came under the Vijayanagara sovereign. During their times, many disputes between the Jains and Hindus were reported. When the town came under the Mughals and other Muslim rulers, various Mohammedan buildings were constructed. The ratio of the Muslim population increased during this time however the harmony was probably maintained among all ethical groups. 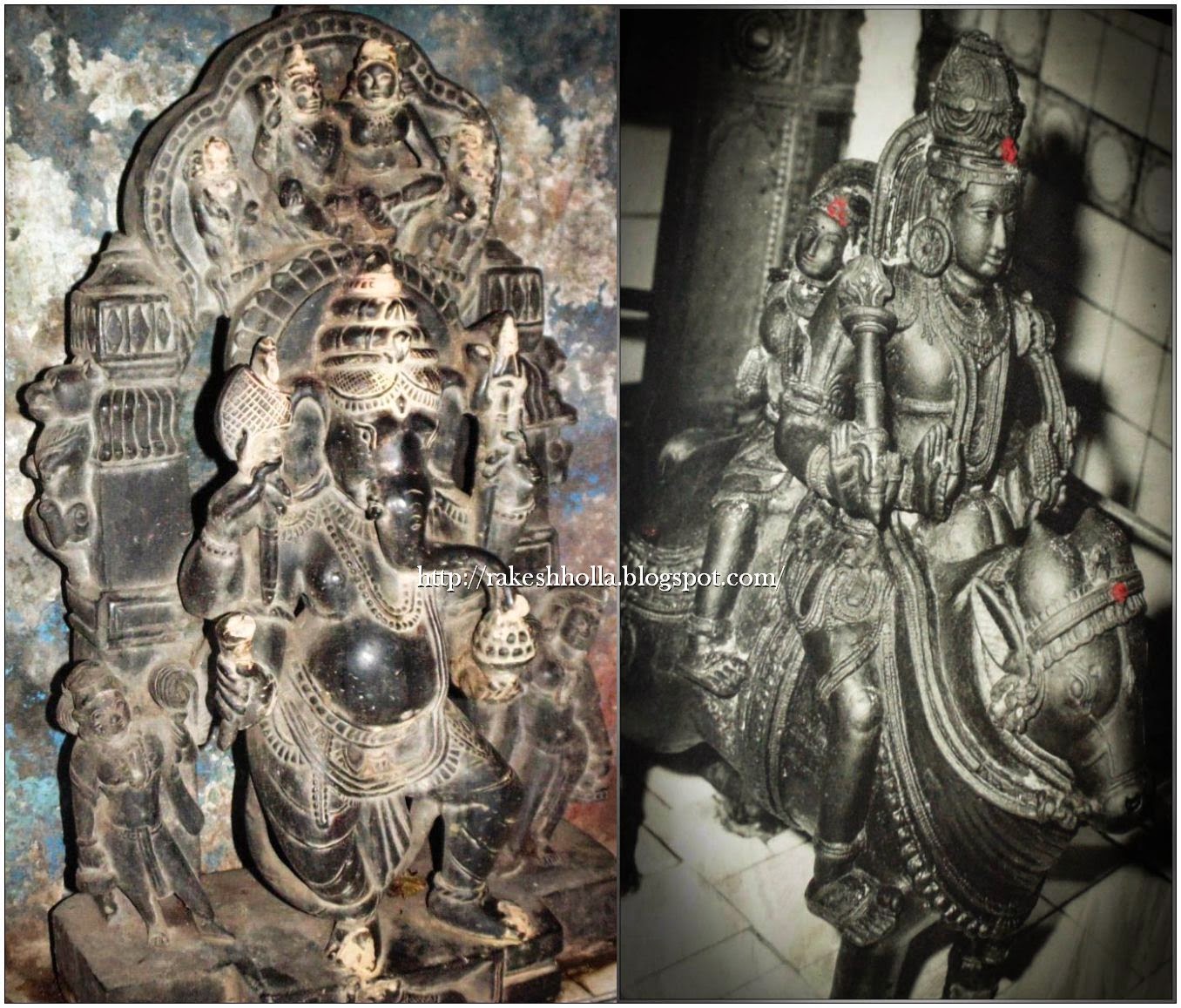 History records that in the past it was the headquarters of 300 villages.  During the 11th century AD, a local chieftain, Lakshmerasa had constructed a Shiva temple dedicated to Lakshmaneshwara. Later, the town came to be known as Lakshmeshwar. The Someshwara temple is an important sacred structure here.  Built in the 11th century AD, it represents the ornate Chalukyan style of architecture with friezes of elephants and richly carved elaborate motifs.  There are 16 bell-shaped decorated pillars. The temple has the idols of Shiva and Parvati riding a Nandi (the bull) in the sanctum sanctorum.   It is interesting to note that it is the only temple in Karnataka with such a rare idol of Shiva and Parvati on the Nandi. 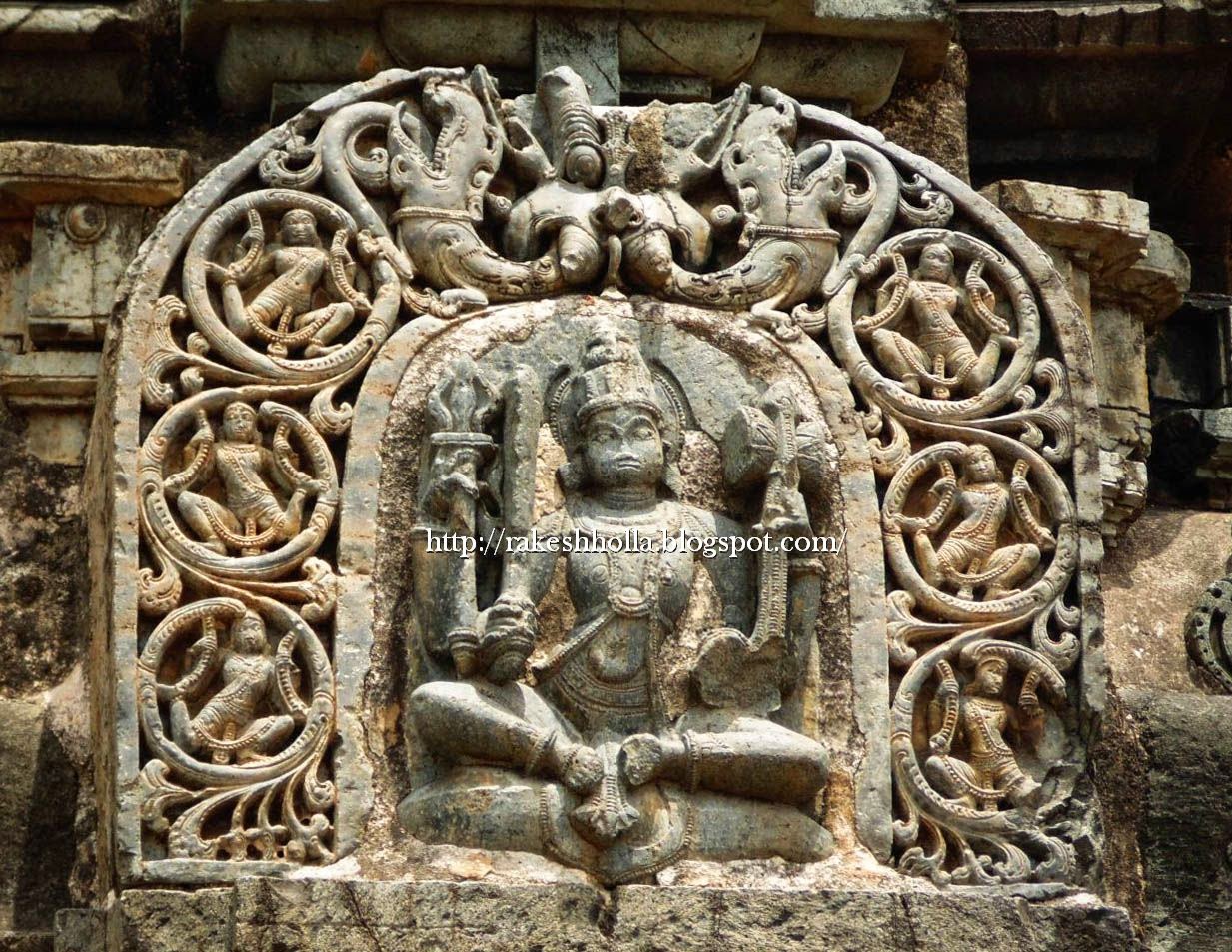 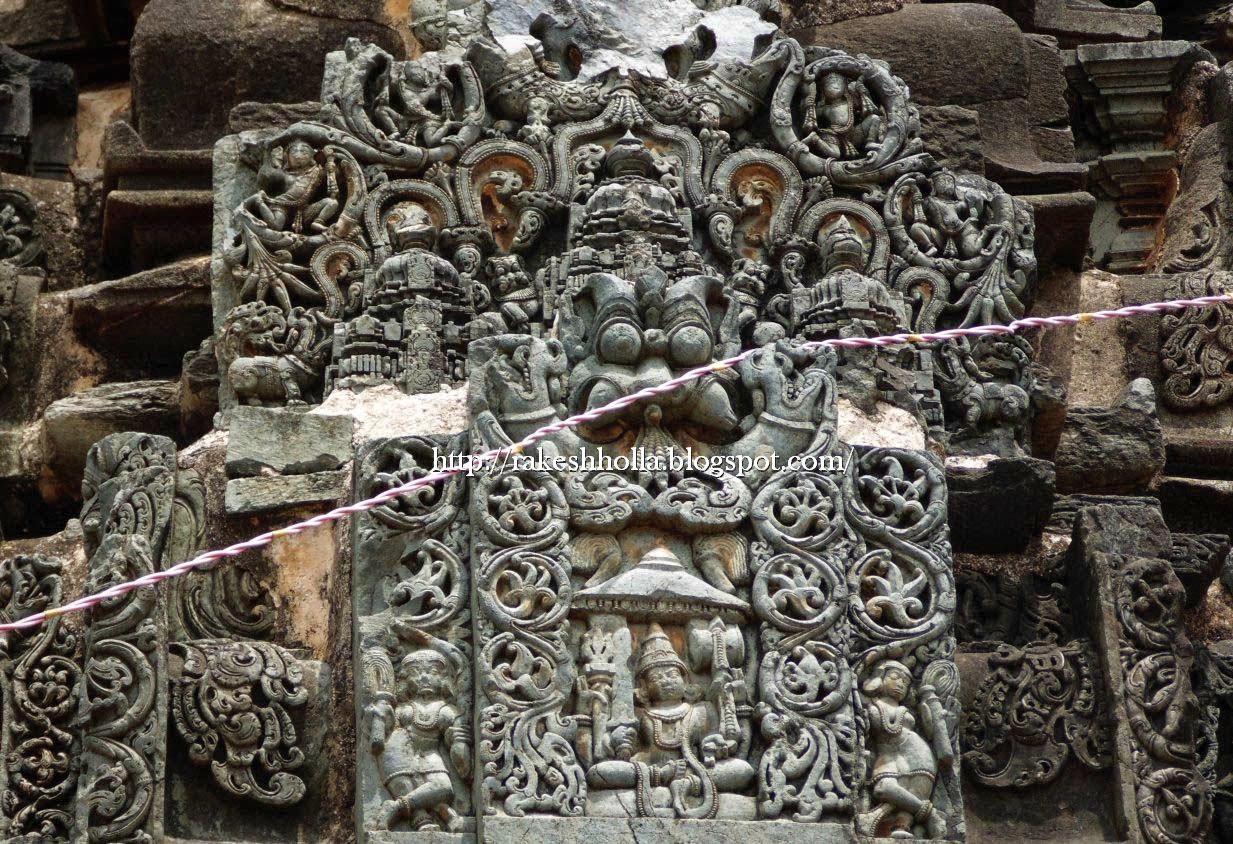 This east facing temple has a large Rangamandapa which has three entrances, west, south and north. With an ante-chamber, it is connected to another smaller Mandapa which also has entrance on south and north. These entrances are adorned with porches on outside. The ante-chamber also has entrances on either side. The external walls have suffered much deterioration. There would have been an arrangement of Ashta-dikpalas on the exterior, only few of these remain, that too in much damaged condition. The image inside the sanctum is unique as instead of Shiva represented in his Linga form; he is shown here riding over Nandi which is standing over a pedestal. 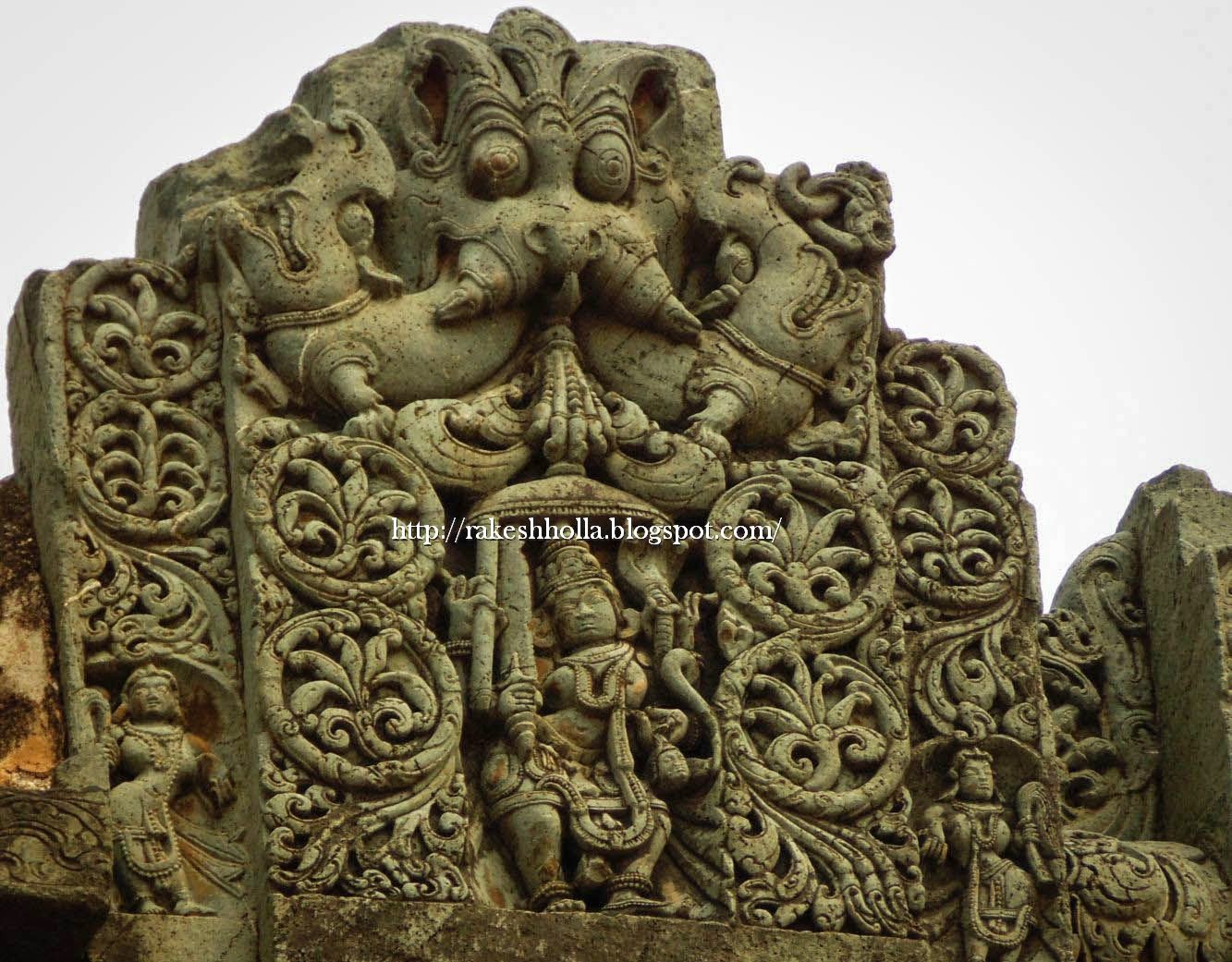 Unlike in other Shaiva temples, the Linga is outside the sanctum sanctorum.  The engineering skills of the builders of that time is evident, as on the day of Ugadi, (the new year), the sun’s rays fall directly on the deities.  There are 53 inscriptions kept in the premises of the temple which date back to the early seventh century AD to the 16th century AD. A legend has it that Adayya, a devout Shaivite had come to Lakshmeshwar from Kashmir.  He had married a Jain woman called Padmavati.  As a devotee of Shiva, he had vowed to bring to Lakshmeshwar an idol similar to the one in the famous temple of Somanath in Gujarat. Adayya undertook the arduous journey and returned after 22 days.  He got a replica of the idols from the Somanath temple. Made it and he installed the deities at the Someshwara temple.  It was the idea was to introduce Somanatha in Lakshmeswara hence it was referred as Dakshina-Somanatha. 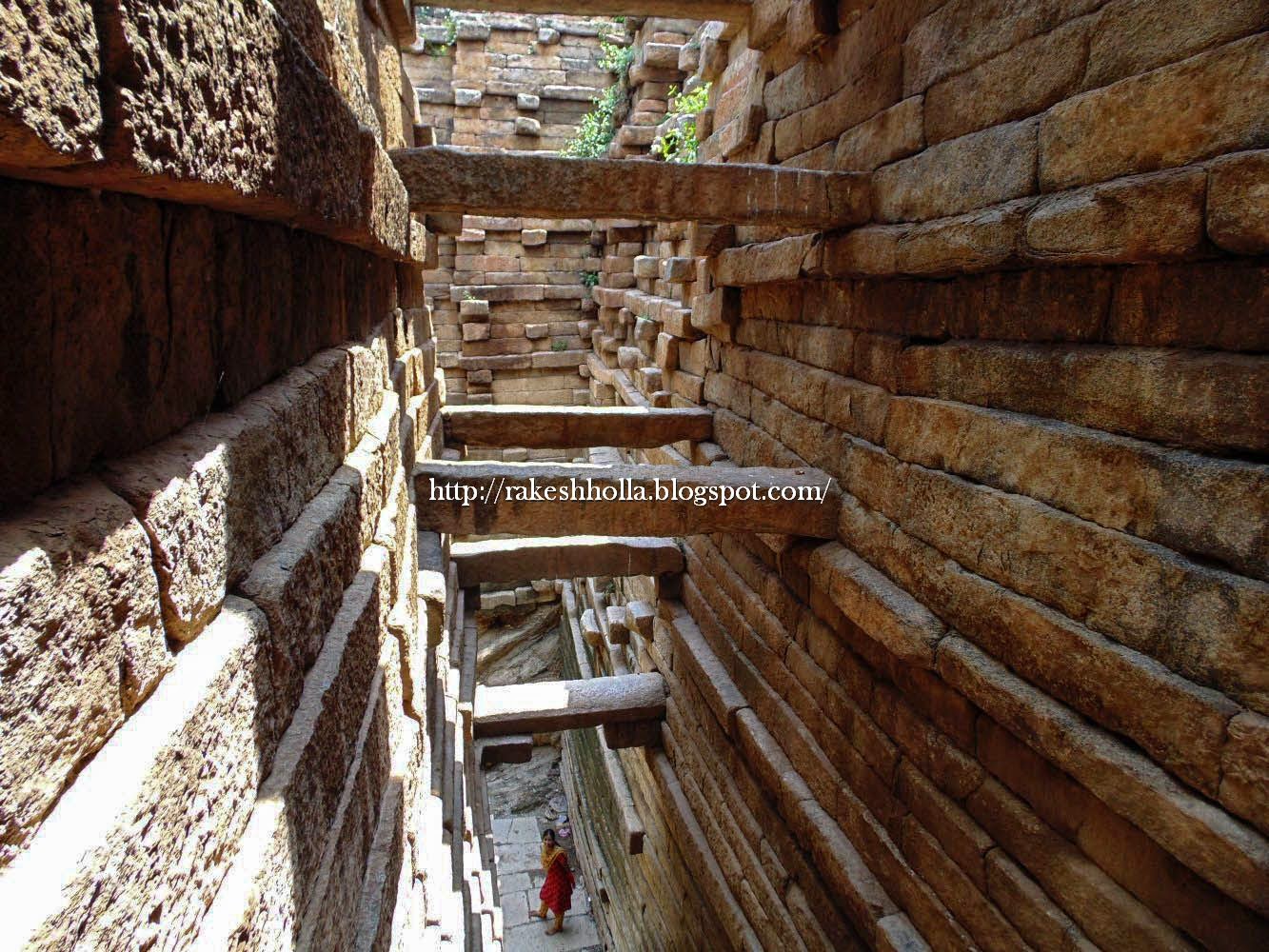 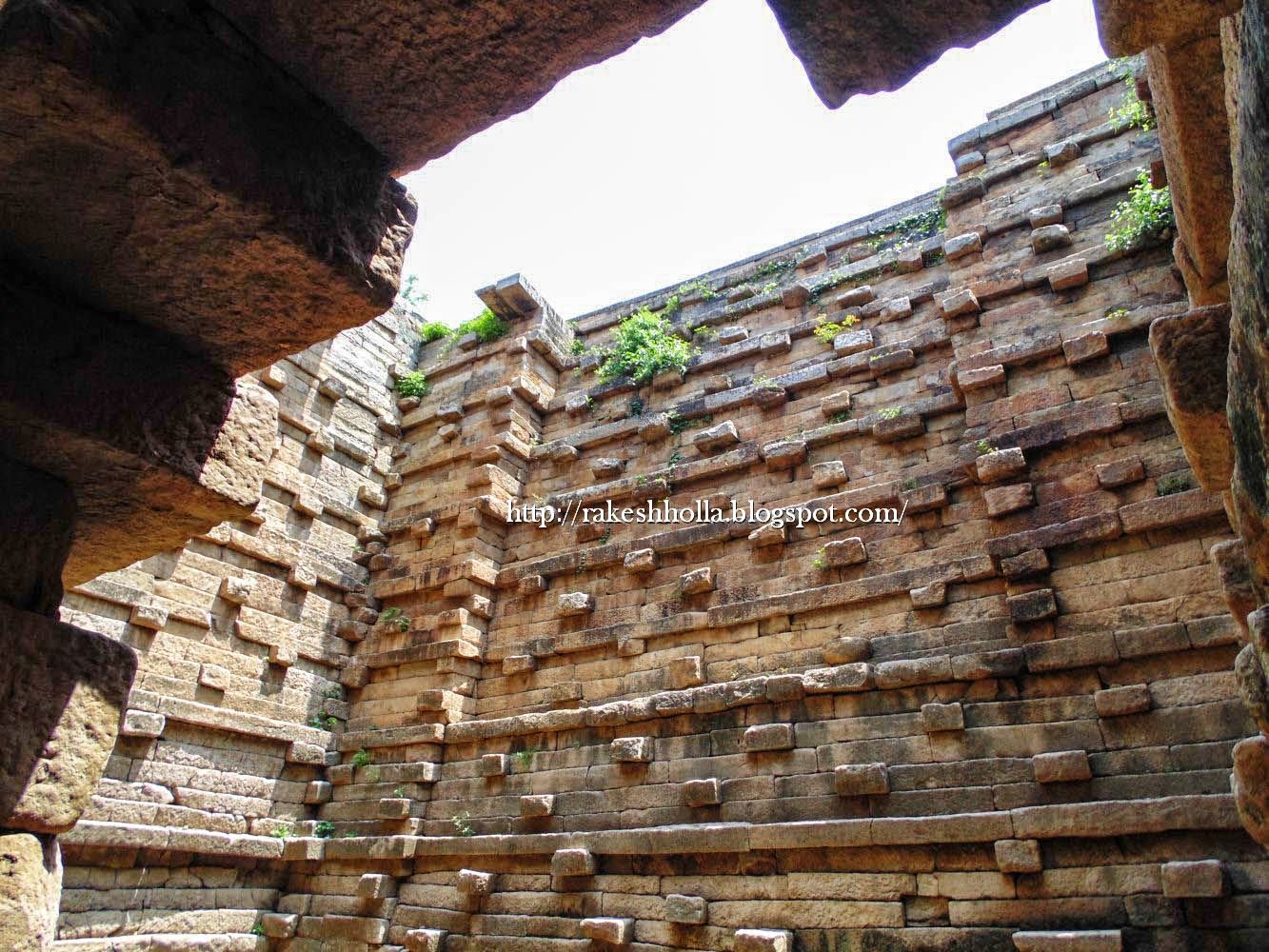 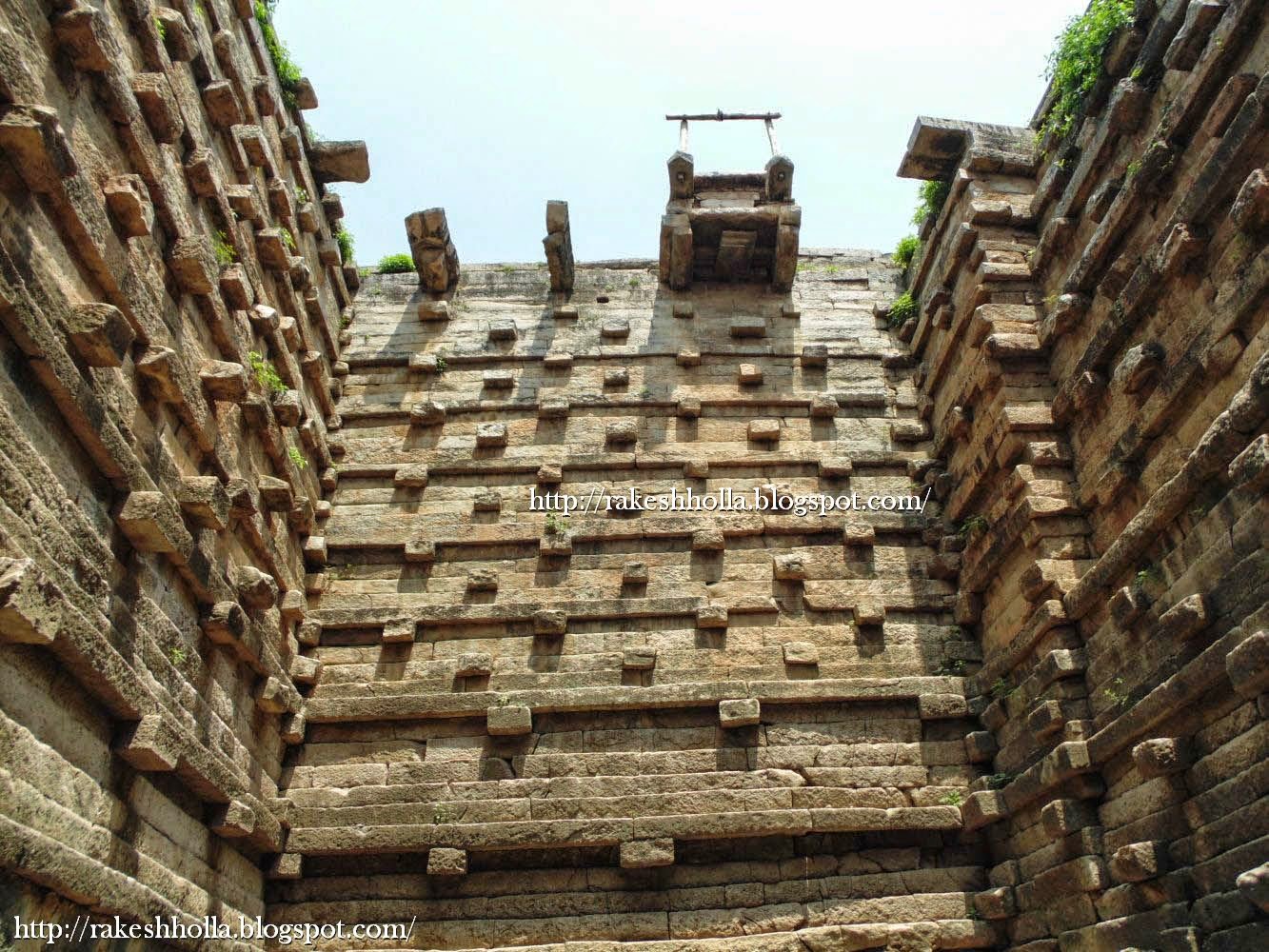 One interesting feature in the complex is a deep open well behind the temple which is accessible by a flight of stairs. The well actually begins beneath the temple and extends outward. There is an entrance to the well just next to the temple. You could sit on the steps and spend an entire evening contemplating the universe. 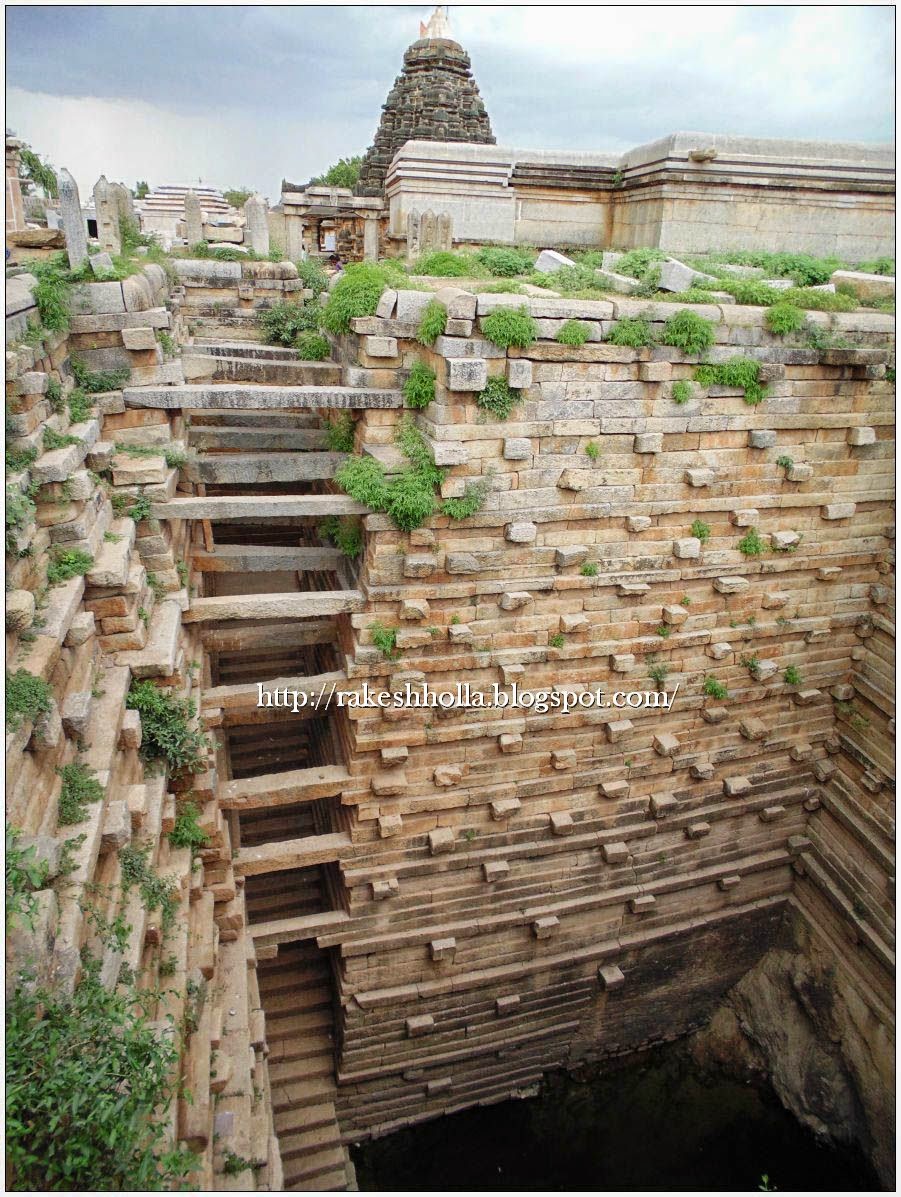 They lined the walls with blocks of stone and created stairs leading down to the water. This was because the base of the well provided relief from daytime heat, and more of such relief could be obtained if the well was covered. 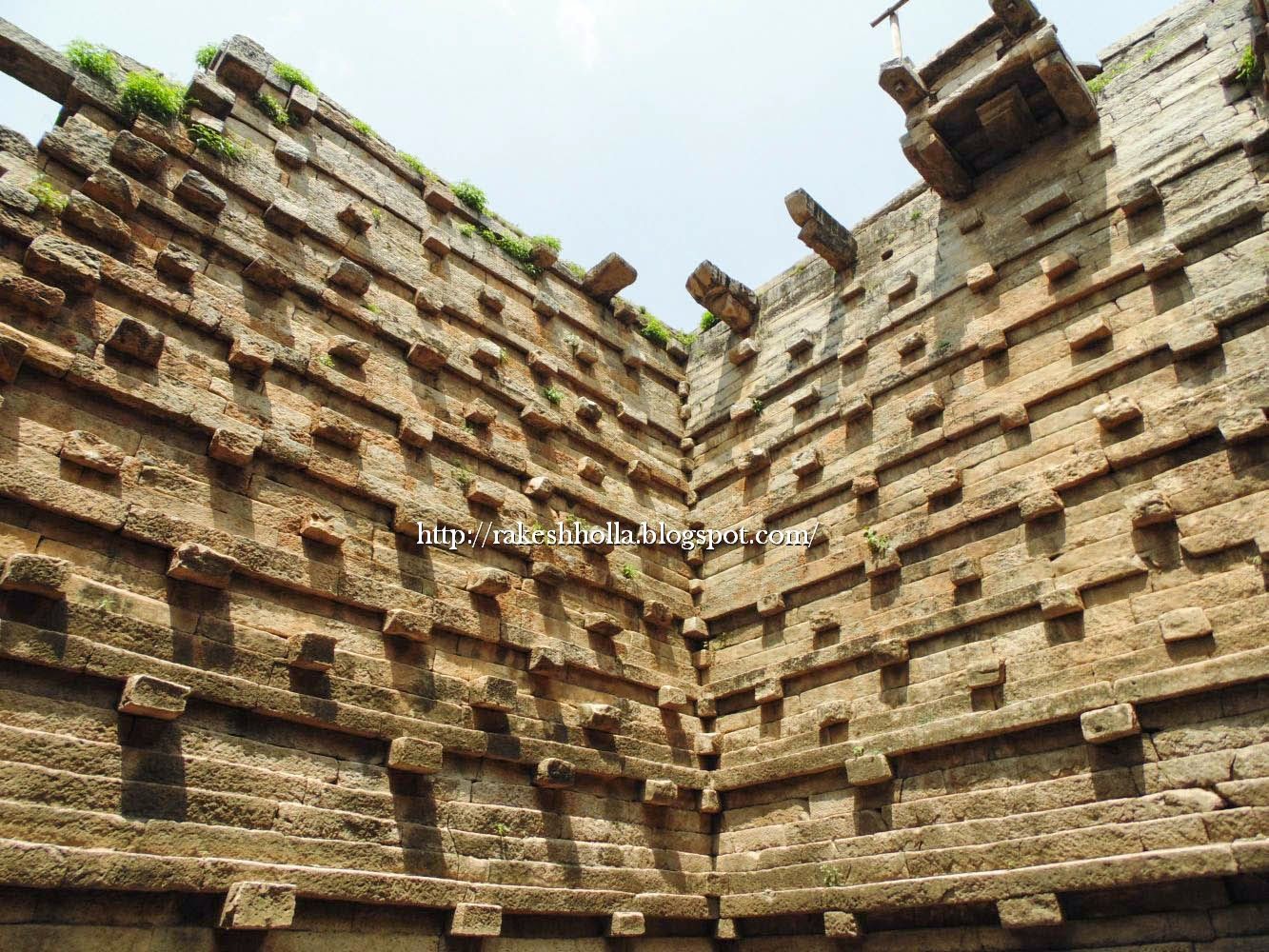 Lovely intricate stone work. Glad to know about this temple.

Rakesh you have done a great job indeed!!!. Not only the photos which are exceptionally good, even the comments you have given are so very informative and specific. I fewel as though I visited this temple and the place in person by reading your blog. God bless you.

nice blog. i took few pictures from your blog and posted on twitter @kamlesm join/follow if you can? i liked that photo of well.
thnx for such nice information

Beautiful snaps and informative. As a student I had seen the amazing rock cut temples of Badami after reaching Gadag.

Great to know about such a temple. Its well is just amazing. Really wish to visit and explore the well an temple. Stone work is very good. Thanks for sharing