There are not many places on the planet that deserve the saying “Stairway to heaven”. The Kudremukh ('horse-face' ) ranges are among the most beautiful and unforgettable pieces of land that I can ever seen and renowned for its Countryside land nestled in a bowl of hills & Owing to stunning dense forests the mosaic of natural grassland though the area is rich in wildlife and abundance of opportunities for Nature Lovers. 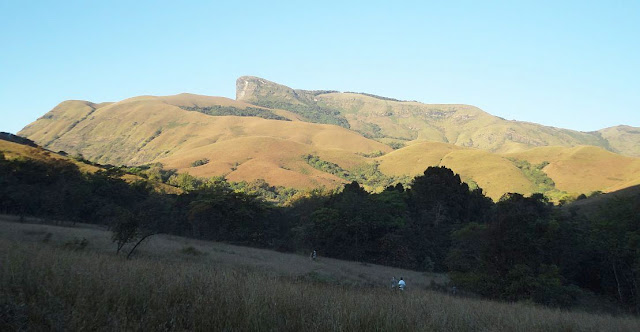 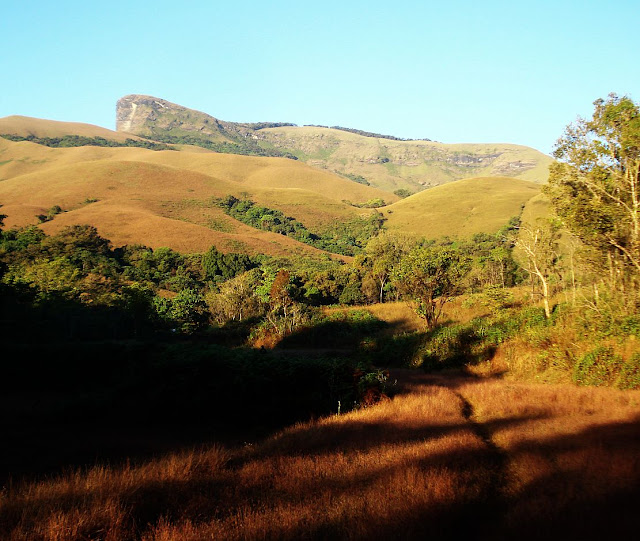 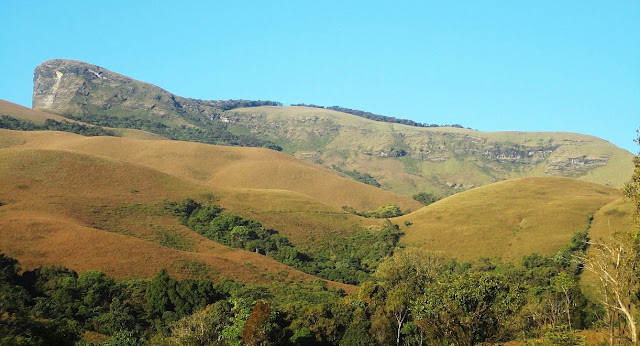 We got up 1 hour before the sun and headed up into the foggy mountain. After a few minutes walk we could able to see the first rays of Sun light hitting over the top of the mountain it was amazingly beautiful and I managed to do a tiny bit of climbing to get a better view. First Glimpse of mountain in foggy morning watching from bottom was amazing to see. 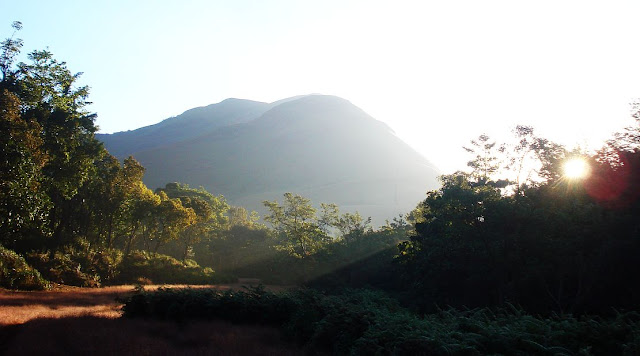 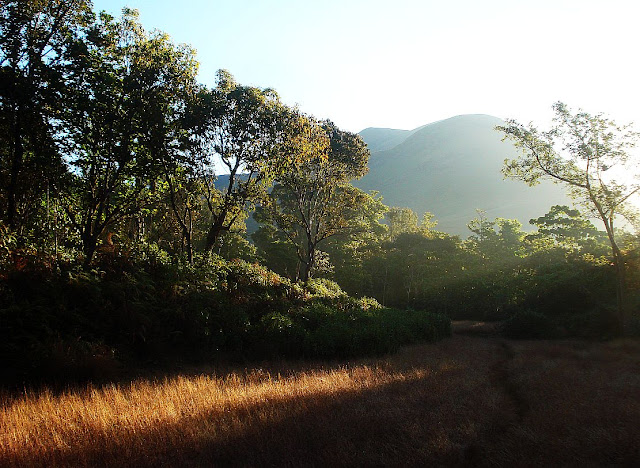 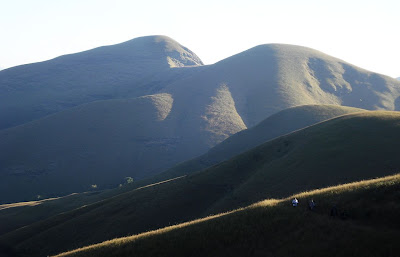 We were entranced by the captivating beauty of a vast expanse of verdant meadows. With its sheer expanse of rolling meadows set against the turquoise sky and the ‘Kudremukha' summit standing guard at a far off distance, was a totally overwhelming sight. 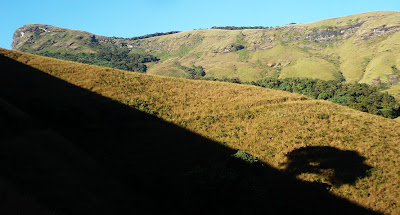 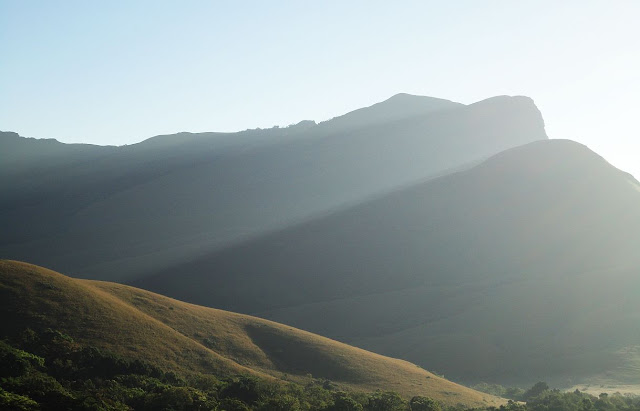 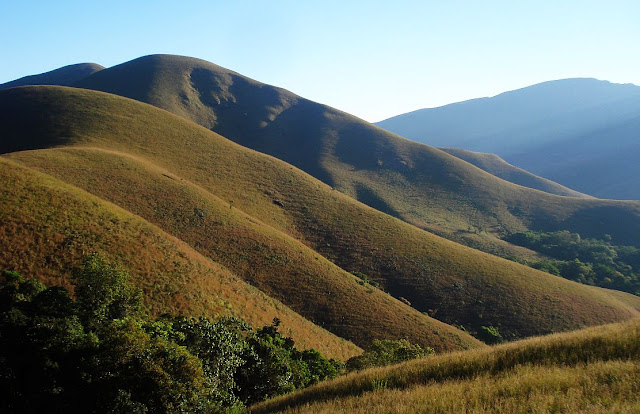 The route from there to with the slopes colored in various shades of red and maroon, from the withering grass and shrubs. The peaks constantly reminded us of their presence through occasional glimpses when crossing initial hill ranges. A painless ascent brought us to the first meadow beyond the tree line. The place was a due reward. The sky and the landscape displayed a riot of numerous hues. 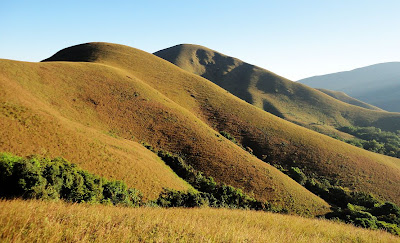 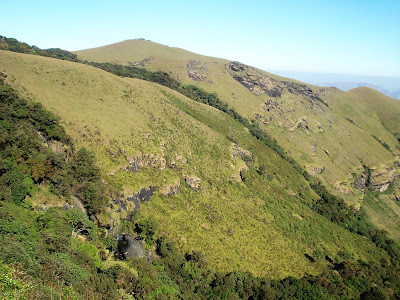 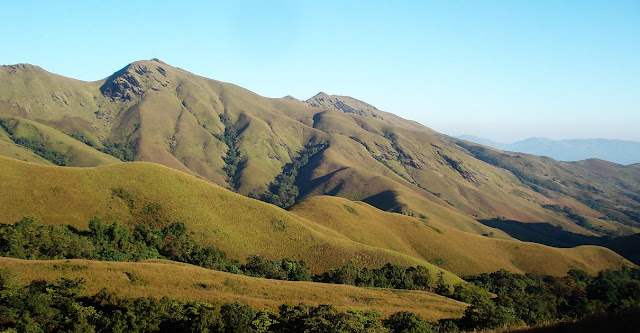 I was drawn to this spot of virginal beauty and ascended the steep grassy slopes devoid of trails. Whether sunning idly on a warm rock overlooking in idyllic views from higher up, it's a dramatic day of big weather - puffy white clouds and blue skies. 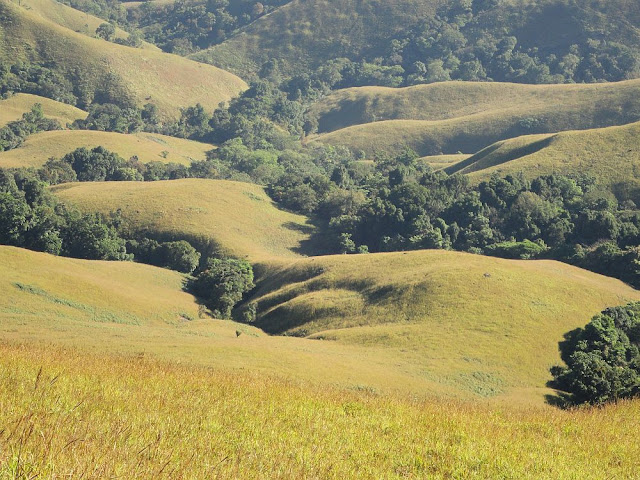 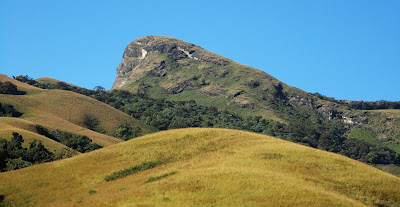 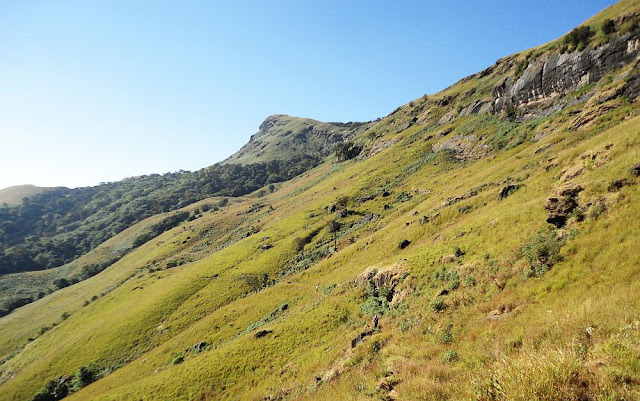 A couple of hours walk we reached the top. Had a great time on top & moved towards the range to reach another side of the summit. We moved at upper vast grasslands with reluctance to cover the next few kilometers and reached to our destiny point. 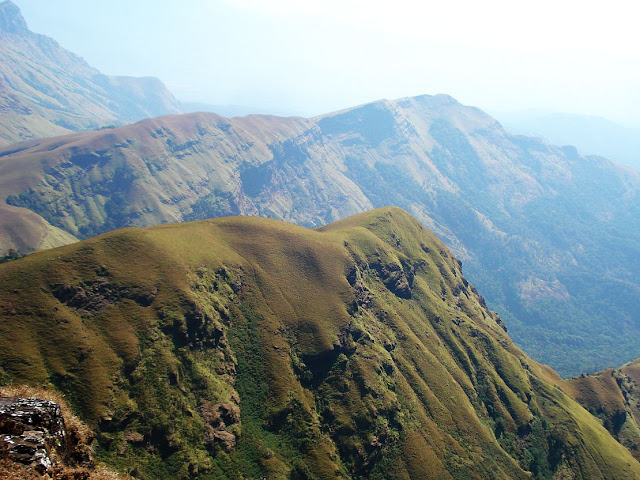 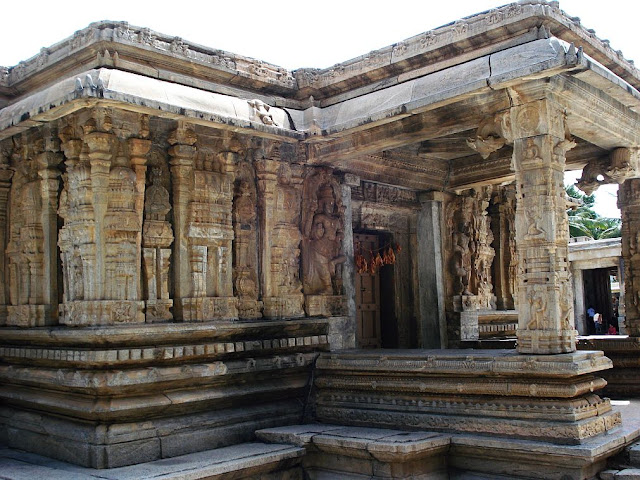 The saga of temples in Talakad is supported by the rich history of the land of the ancient dynasties of south , the Gangas (350-1050 AD) were one of the most illustrious who ruled over a greater part of , then known by the name Gangavadi. Along with the Kadambas, the Gangas rose to power and ruled over the southern part of Karnataka. They continued to rule over Gangavadi till the close of the 10th century. When the Cholas overpowered the Gangas during the 11th century, Talakadu was renamed as Rajapura. In 1117, Vishnuvardhana, one of the greatest rulers of the Hoysala dynasty seized Talakad from the Cholas and assumed the title of Talakadugonda. In commemoration of this achievement, he built the Keerthinarayana temple at Talakad. 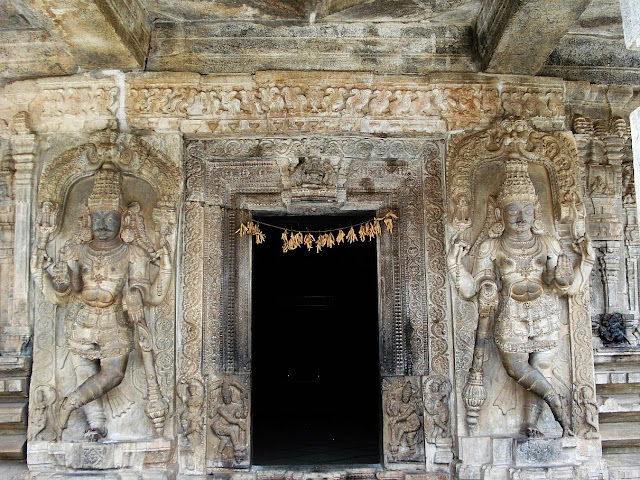 Today, most of the magnificent temples of this ancient town are submerged in sand. The entire stone pillars (square at the base and fitted into a wheel below the abacus) lie scattered throughout the town. Among the temples of Talakad, the Pathaleshwara, Maruleshwara, Arkeshwara, Vaidyanathee-shwara and Mallikarjuna temples form the pancha lingas. In honour of these five Shiva temples, a fair is held once in 12 years called Pancha Linga Darshana. The Pancha Linga Darshana is held on a new moon day during the auspicious month of Karthika. 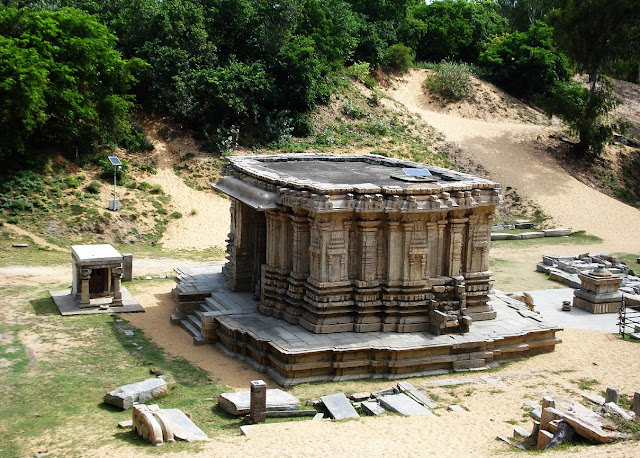 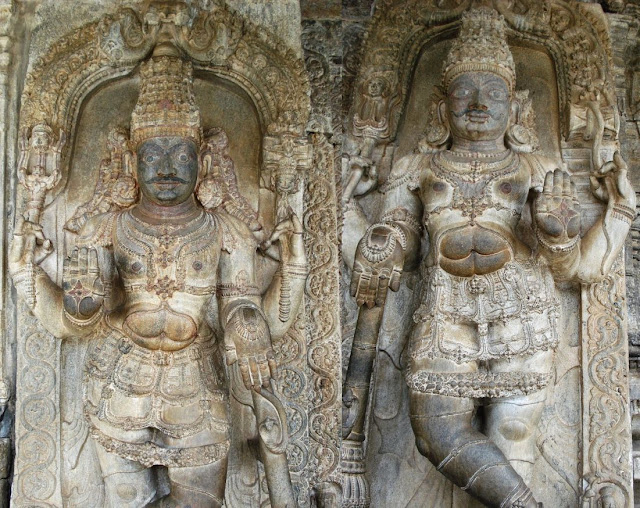 Besides the Pancha lingas, there are many other magnificent temples in Talakad. The Kapileshwara temple is one such structure that has a Navaranga with pillars, pierced stone windows and ornamented creepers with dancing figures. Another magnificent structure is the Keerthinarayana temple, which is the only temple in Talakad to have been constructed in the Hoysala style of architecture. A greater part of this temple is buried in sand. Other than the sanctum sanctum, there is a Sukanasi and a Navaranga in this temple. 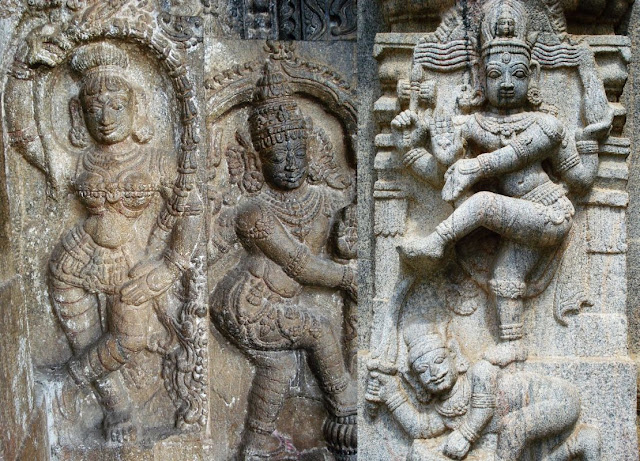 Inside the sanctum sanctum stands an eight-foot-tall statue of Keerthinarayana. Recent excavations in the temple complex have brought to light remains of earlier centuries. Among the findings are an intricately carved Mantapa (with carvings of Ugranarasimha) made of stone, which is about 12 foot tall. A thulasikatte, remnants of a Garuda kamba, 2 stone inscriptions and walls of an unknown structure were also found here. 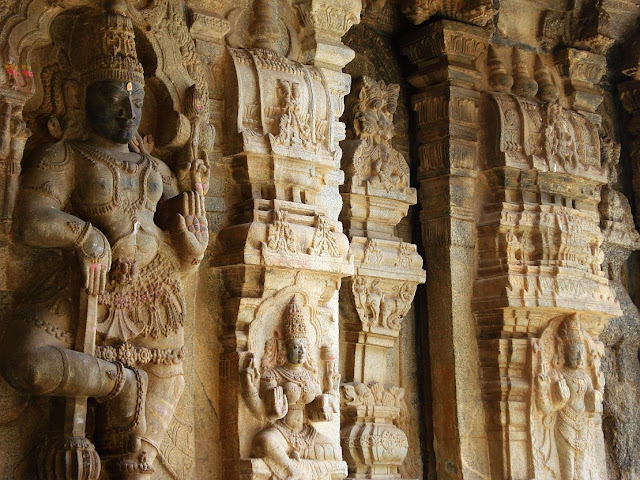 The presence of a large mass of sand in Talakad amid lush green vegetation is something that is worth pondering. While geologists say that Talakad is filed with sand carried by the wind from the dry bed of river Cauvery, the locals still prefer to go by the age-old tale of Alamelamma and her curse. 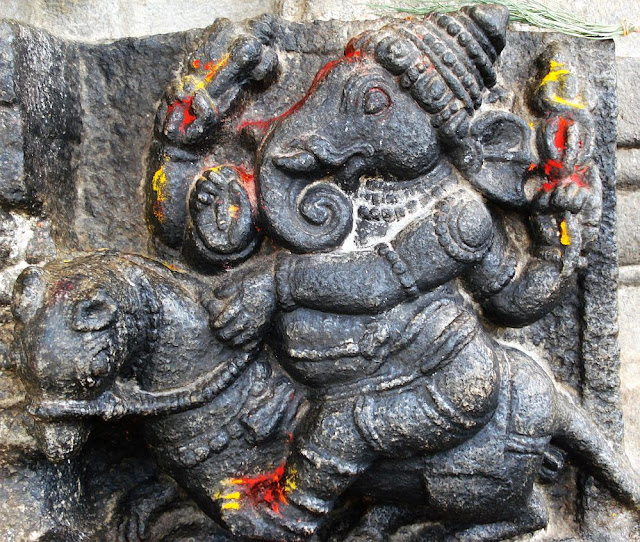 Localite Rama Nayaka narrates the story rather dramatically. About 400 years ago, Srirangapatana is supposed to have been under the control of the mighty Vijayanagar Empire. Alamelamma was the wife of the king’s representative named Srirangaraya. Every Tuesday and Friday, Sri Ranganaya-kamma borrowed Alame-lamma’s jewels and returned it after the pooja. Meanwhile, Srirangaraya developed a tumour on his back, resembling the hood of a cobra (the disease is called Bennu Phani Roga or Raja Roga in Kannada). Srirangaraya, along with his wife, came to Talakad to worship Vaidyanatheshwara with the hope of being cured of his ailment. 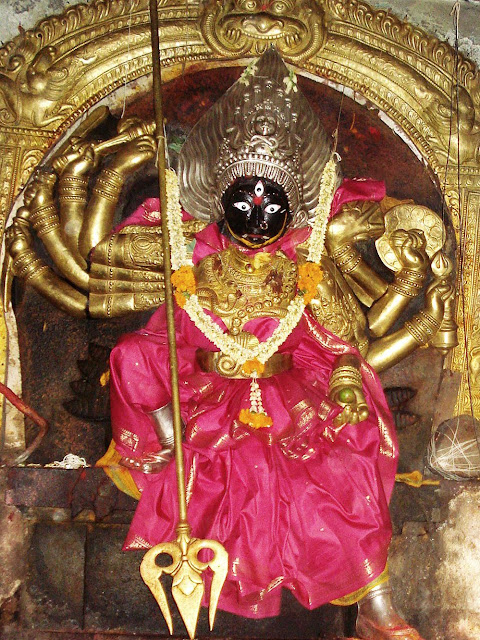 Srirangaraya, however, did not survive for long, and his wife settled down in a small village called Malangi. During this period, the Wodeyars took over Srirangapatna, and started demanding the jewels. When Alamelamma could not bear it no more, she sent a nose ring to Srirangapatana and jumped into a pond in Malangi with the remaining jewels. 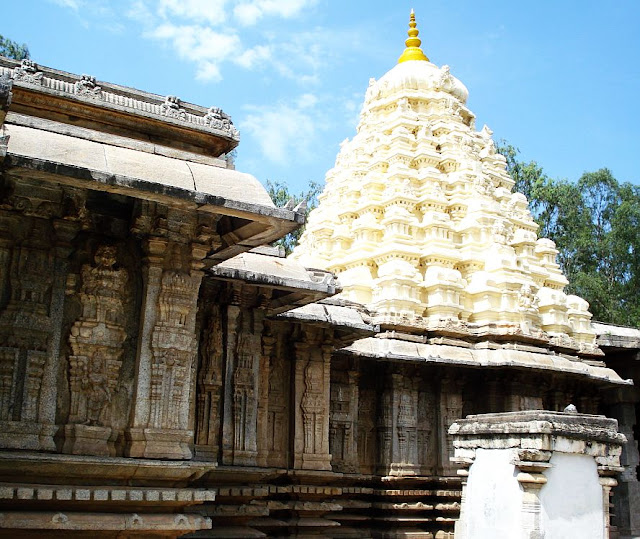 Before she ended her life, Alamelamma is supposed to have uttered three curses, of which one is “Talakadu Marulagi.” When translated to English, it means, “Let Talakadu be covered with sand.” The locals still believe that Alamelamma’s curse is the cause for the large mass of sand in Talakad. 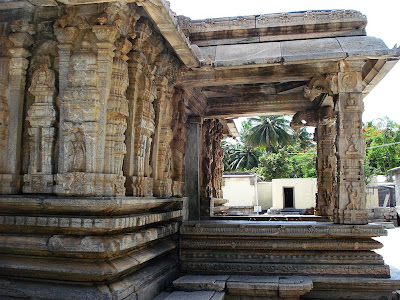