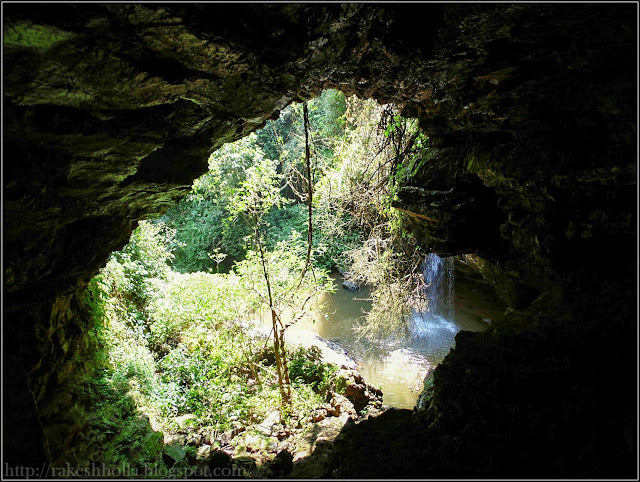 Early morning of Sunday five of us started our ride from Arun’s house best part of this trip was we were supposed to cover 2 falls and 1 cave. Drive was very smooth on the way we stopped for a while Arun went to the nearby village initially I thought he went to meet his relatives but when he returned his friend also joined our team for guide us. After a short drive we parked our bikes and started our trek through areca plantation. Under the canopy of trees so the sunlight didn’t actually dry them so they were slippery beyond belief. At one point the trail goes through narrow edge on top of the waterfalls. 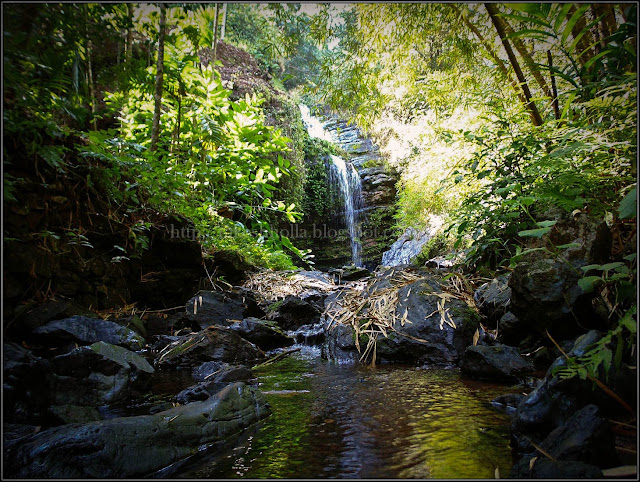 To reach the cave we had to follow a small stream flowing which led us to the bottom of the cave and actually this stream created 2 stairs of waterfalls next to the cave, the winding path to the right of thick vegetation leads to the base of the second stage of the Bavali falls. 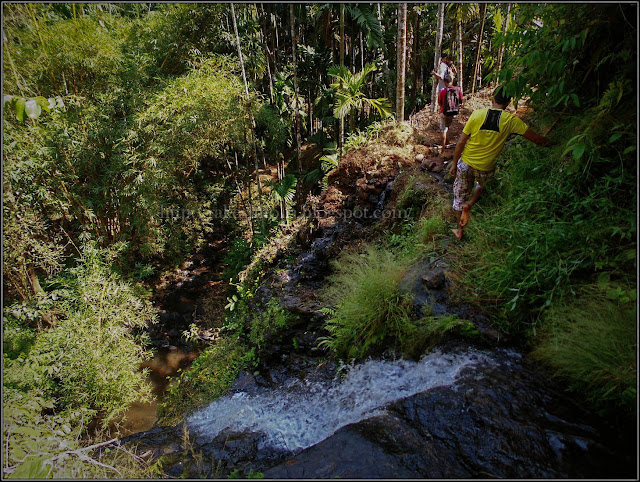 There is 30 feet high waterfall, its bottom covered by a vast pool.  What an incredible sight. A stunning, tranquil Waterfall and cave hidden in a bowl of craggy, jungle covered peak. In front of the waterfall grows a massive and gnarled tree with beautiful red flowers. A colorful fresh water crab skitters away from my foot, shocked at this unwanted intrusion. 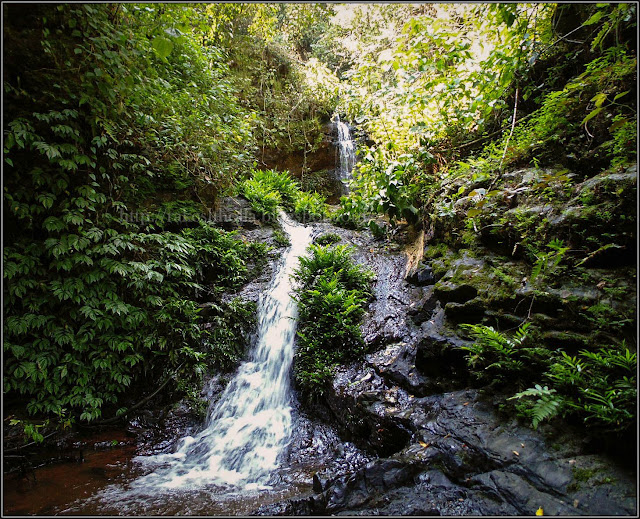 This unique geographical area has been eroded away over many years and is now full of narrow ledges snaking out into the densely forested valley. Though the fall was a little disappointing with very little water the place around was simply superb. 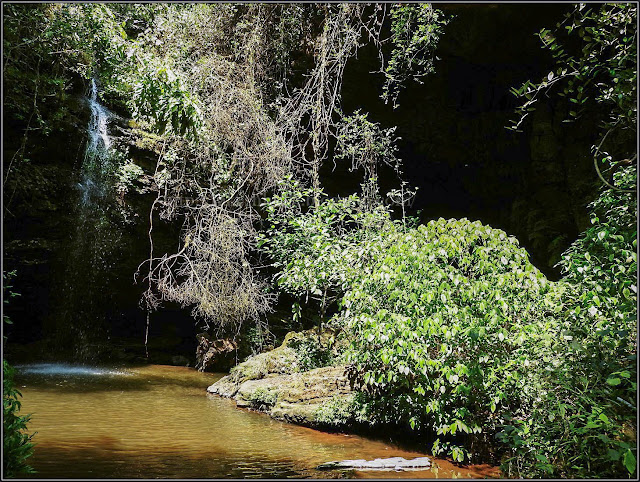 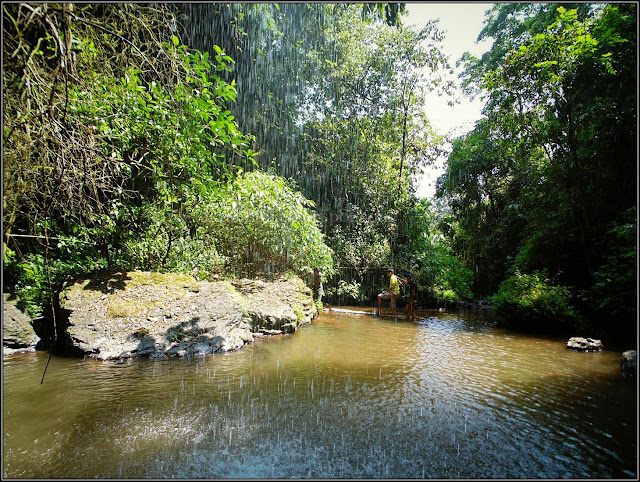 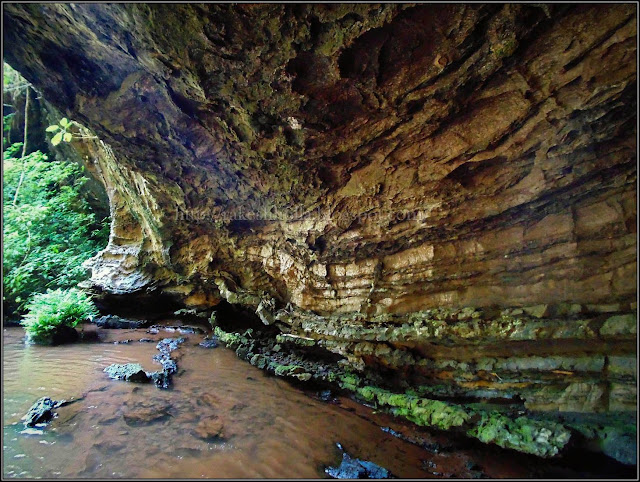 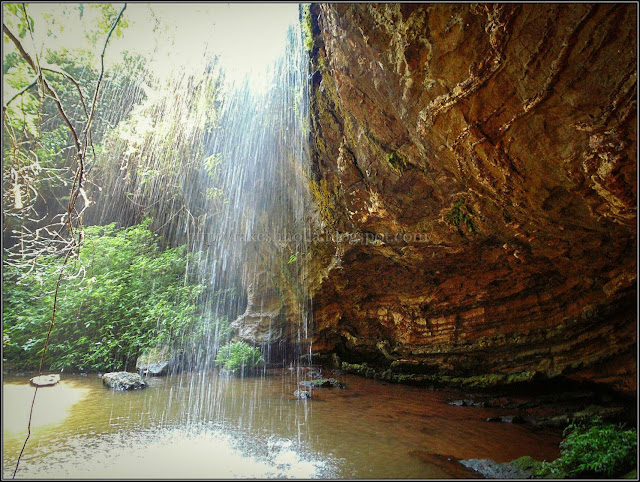 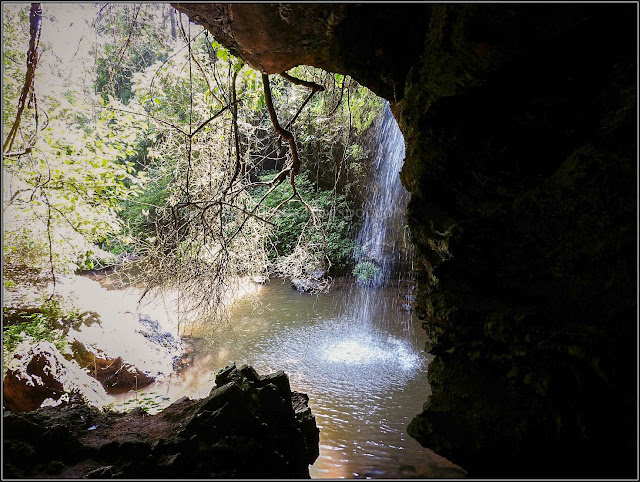 Later we stepped into the cave, entrance of the Bavalakki cave is partially covered with a thick hanging carpet of tropical vegetation. The view back out the cave entrance and down the cascading stream is mysteriously beautiful. The view out the entrance to the cave made me feel like I was in a tropical jungle, with the roar of the waterfall and the thick green forest all around. 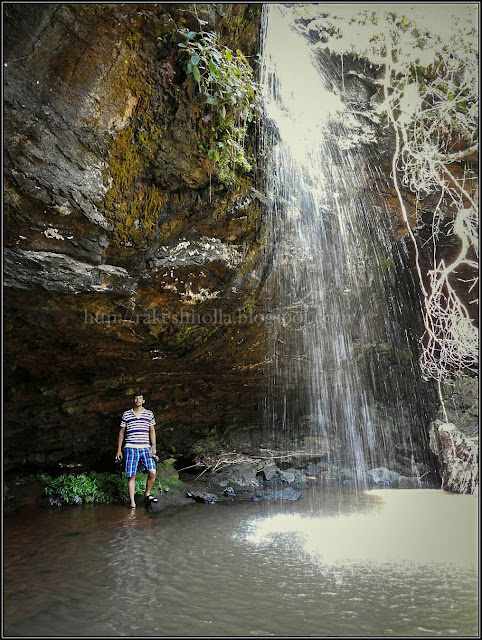 Just as I am about to crawl deeper down a series of small tunnels I spot the gleaming eyes of several spiders clinging to the moist rock walls. Each is the size of my hand and proudly reigns over a thick cluster of web they appear to be some sort of tarantula and do not look particularly friendly. We spend another hour exploring the gorgeous limestone rock formations. In places we pass solid walls of glittering crystal guarded by exquisite trunk like pillars. 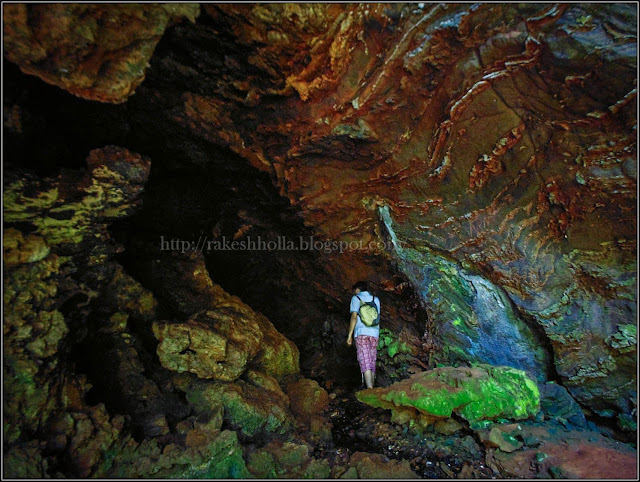 Thousands of bats chirp overhead as we penetrate deeper into the heart of the cave. Exploring the cave in winter may wake the bats from their hibernation, causing them to use up their fat reserves and placing them at risk of dying of starvation.  Exploring the cave in summer may disturb mother bats from nursing their young, who may fall to the cave floor and die.  Spring is the safest time to explore a bat cave because there are plenty of insects for them to eat outside, and they haven’t given birth to their young yet because without bats, all humans would starve to death. 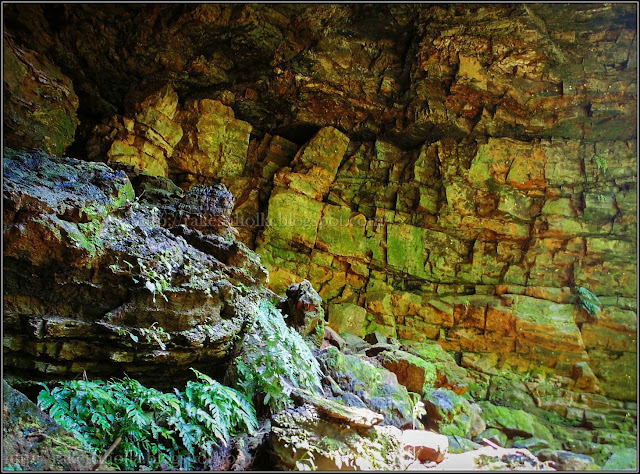 Our relationship with bats is as important and symbiotic as our relationship with honey bees that pollinate all the crops that we eat, and that we feed to our meat animals.  Bats work on the other side of the equation by eradicating crop pests like grasshoppers.  The bat population of a single cave can devour the equivalent of 18-wheeler truck full of insects in a single night.  From just one cave’s bat population. 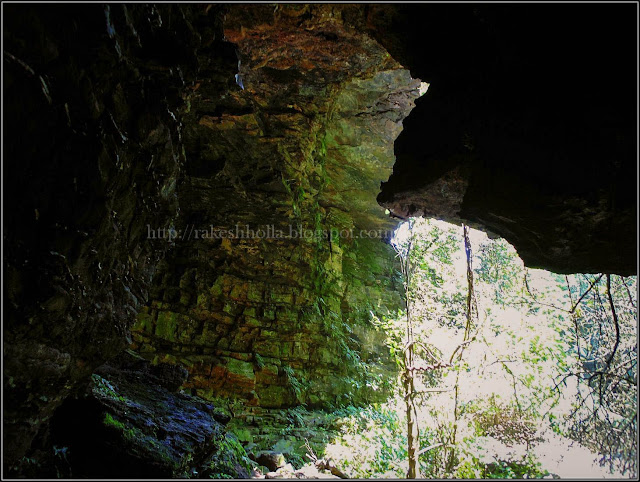 There’s not enough bug poison in the world to deal with the kind of insect swarms we’d be dealing with if the bats weren’t there to eat them.  Organic farming would impossible.  And the toxic sprays that would be necessary to keep pests off our crops would pollute our waters, killing many other species, and causing untold human health problems.  So that’s why we should care about bats.  They’re not evil, they don’t attack humans. So the long and short of it is that, without bats all human life perishes.  So don’t explore this cave beyond its entrance. We noticed the very large water snakes on the stream bed. 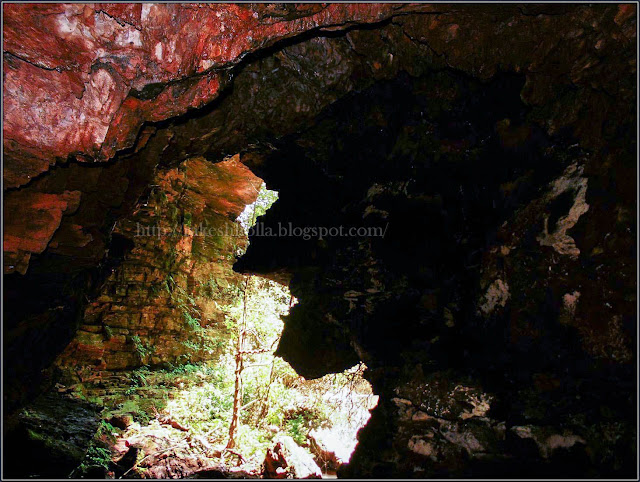 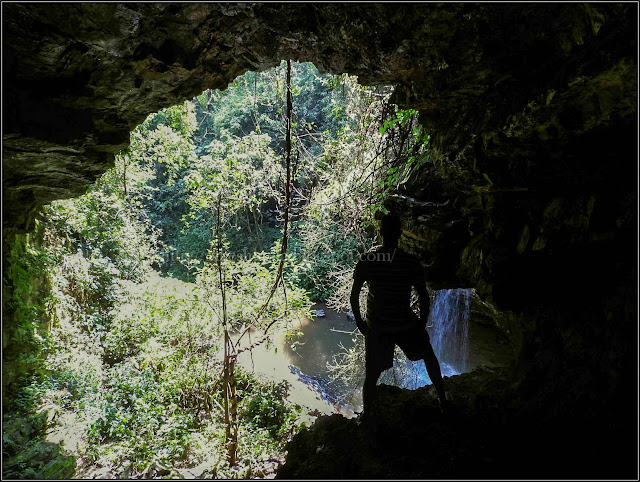 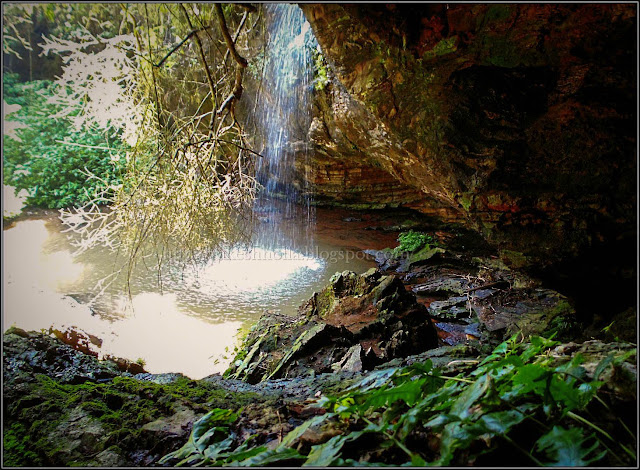 A winding downer path on thick vegetation led us to the base of the second stage of the Waterfalls. We romanced with cold water sprays. Everyone took bath and enjoyed some time in this place, a wonderful soul stirring experience under a waterfall. It truly is a breathtaking place. Best of all we have it all to ourselves very few travelers make it to this corner and although this is likely to change I feel very lucky to be here. 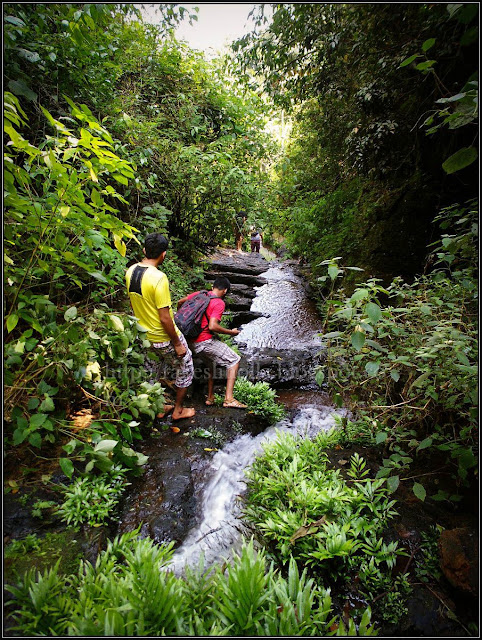 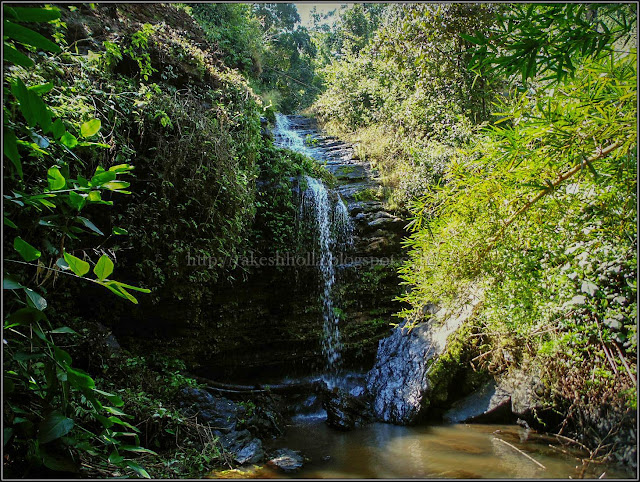 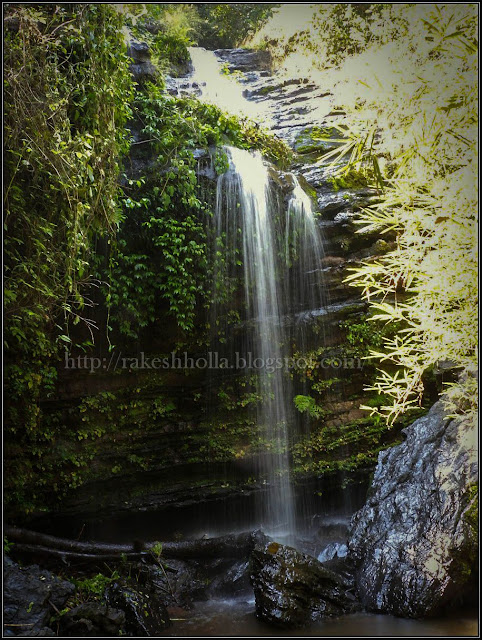 We whole heartily thanked Arun and his family members for the hospitality, soon after having our lunch we back packed and started our ride back. In the end we were only left with loads of memories to cherish. 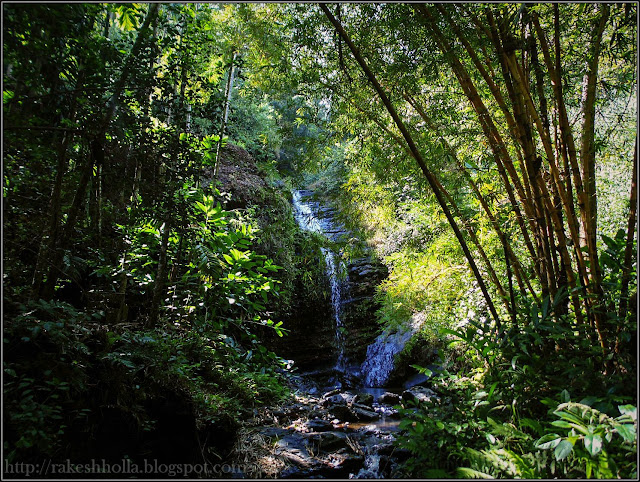