Pertaining to waterfalls in Rainy 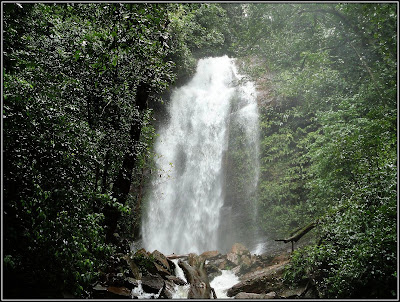 After a long wait finally I made my first Monsoon trek this year. This is my third visit to the same place but its quite interesting in this ever changing nature. This time We preferred bikes as our plan was on Sunday early morning. We 3 (I, Ashok & Chandru) started our journey with 2 bike. 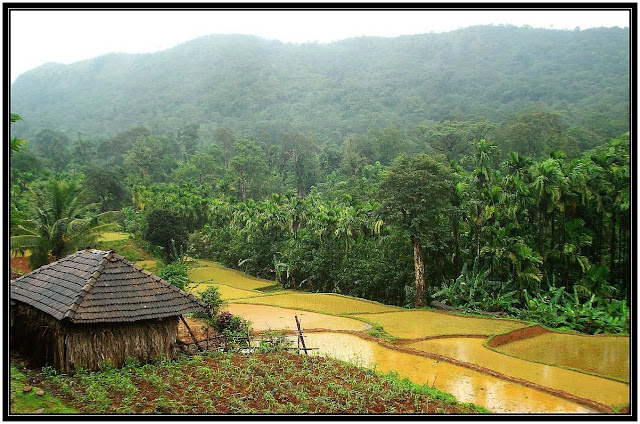 Initial journey was quite pleasant with nice upwind Unfortunately when we hit the mountain road heavy rain started and not just a shower, it was like being at home, drizzle with some heavy stuff chucked in. It was pouring everywhere many small waterfalls were plunging either side of the ghat road. I found myself winding through the steep valleys and gorges, I had to focus on not to crash as the view was so breathtaking really I enjoyed the ride in my own imaginative world. 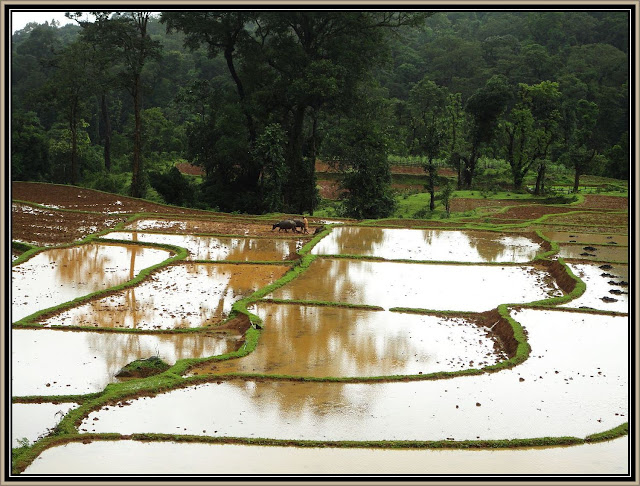 This time we changed our regular rout , Villagers suggest another rout that was little longer because of heavy rain old regular rout was bad and was flooded by nearby stream.. After a long ride we took a right turn into the boggy road. Lucky enough the main road was surfaced but the others where just mire and was fully unpaved, muddy, slippery, bumpy, some places were very deep and narrow. Some places were very difficult to drive in deep layer of soft mud after a lot of risk and hard attempts we reached our destiny point. 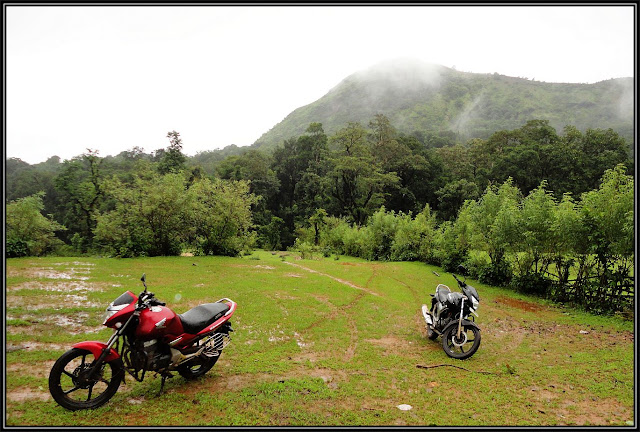 We left our bikes and headed into wast greenish afloat paddy fields surrounded by mountain .After crossing we entered into the rainforest. It only took 15 minutes of walking through pristine mountain forest we reached the stunning first stage of the waterfalls. 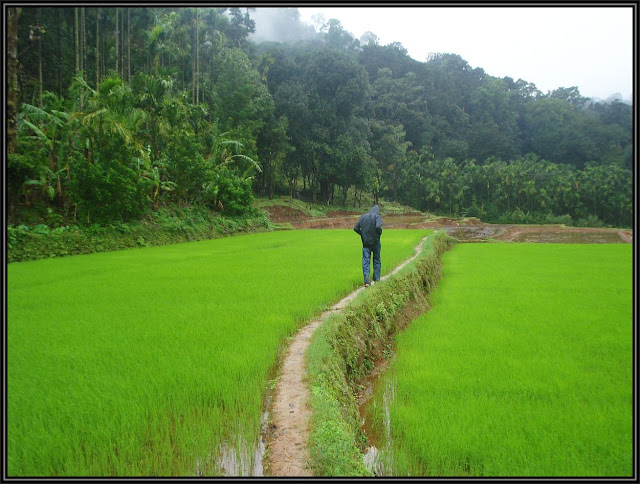 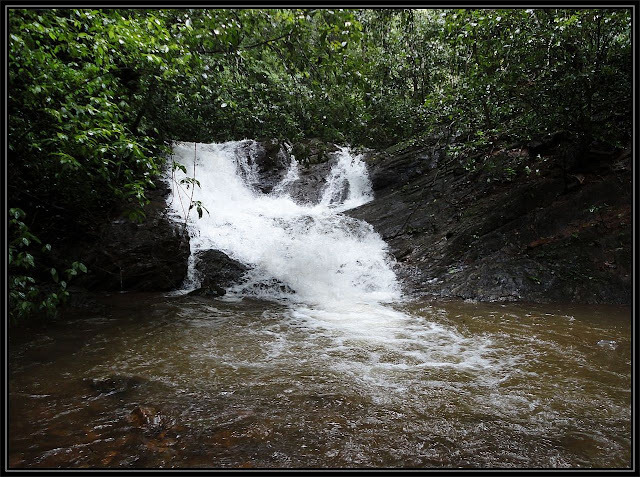 After admiring the falls we started to climb against the downhill waterfalls some places we climbed the sideways of the fall. The final trek route runs through thick forest and includes rock climbing. The trek from first fall to the 5th fall includes steeper trek that runs through forest, water and rocks. 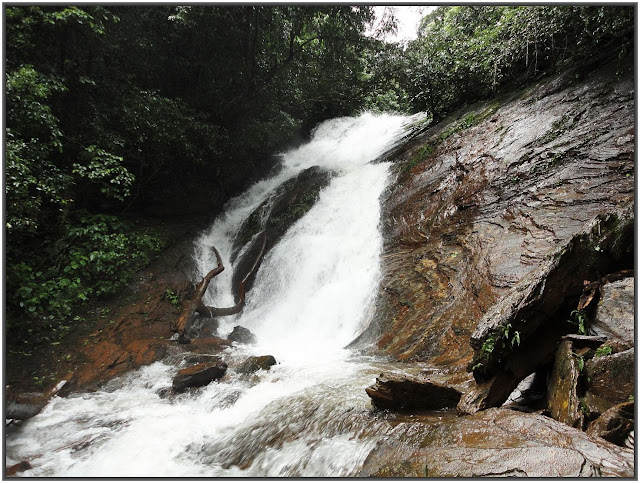 The gushing main cascade tumbling down the massive rock face and greenery with dense vegetation on either side of the falls. After a good soaking rain waterfalls flowing at their peak, filling the air with mist as they tumbled out of the forest, splashed over boulders, and dropped down ledges before finally plunging into a pool. 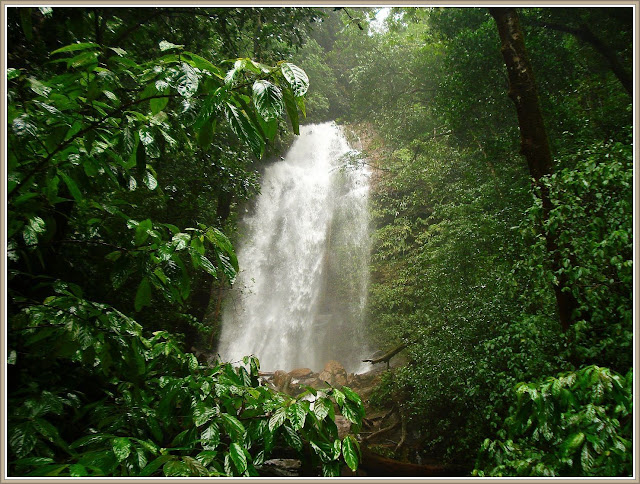 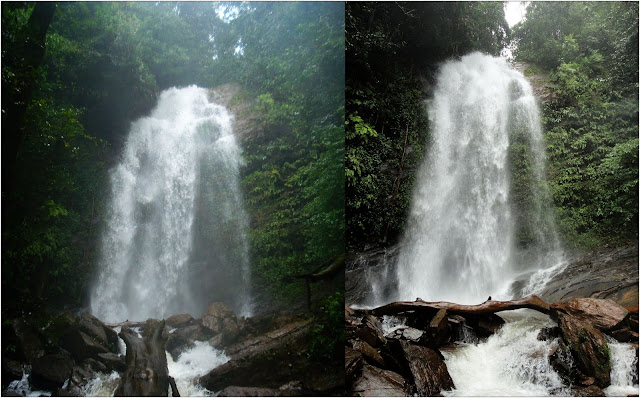 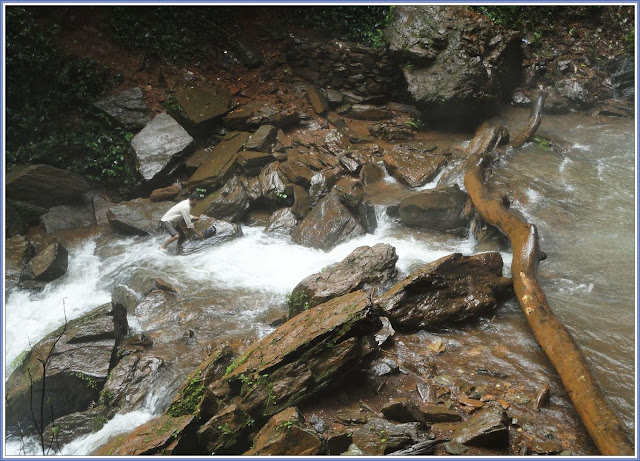 We took our obligatory photos later we decided to venture even further so we crossed the stream and started to hike uphill. We could barely see the trail through the leaves and fallen branches. But we stuck to it, if only to see if the next intersection would give us a clue to where we were the trail wrapped around a marsh and disappeared into a patch of mud. But just beyond the thick shrub we spotted the upstream and after a great circus we had reached the deadend point on top of the waterfalls. 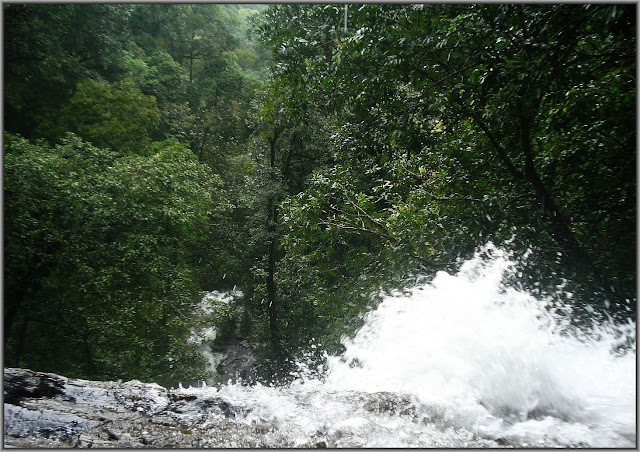 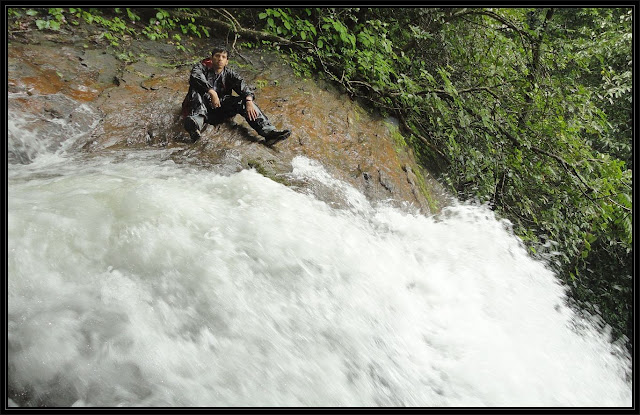 Here water was plunging onto the escarpment with white foam over dark rock into iridescent blue pool was totally quite beautiful.The top the trek up the hills into the forest and view from top of the falls gave us some really good views of the valley. The sight and sound of a waterfall soothes,relaxes,refreshs and recharges one's senses. 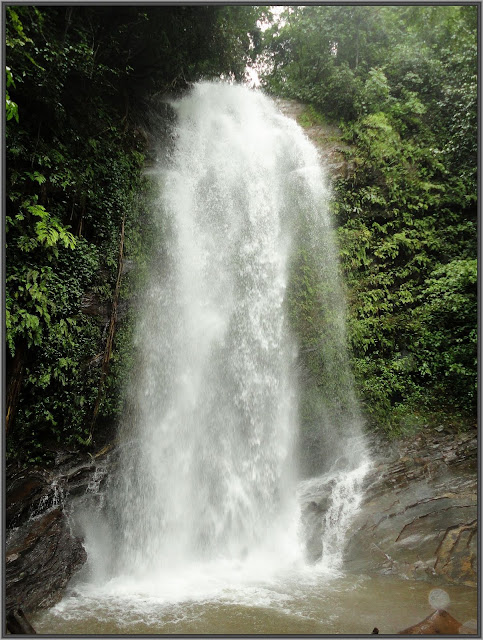 This magnificent waterfall is located in deep forest near Kodachadri hill a series of 5 falls, one above the other, in splendid surroundings makes it one of the best waterfalls in rainy season. 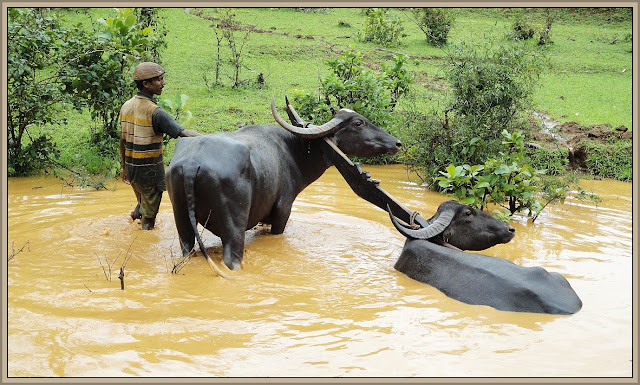 While returning throughout the area we ended up seeing more villages including their buffalo wallowing in the mud lot of activities. One of the nicest ways to enjoy the sights and smells of fresh forest Crispness of cold air is on a motorcycle, especially if the roads traveled have more twisties and less vehicles. 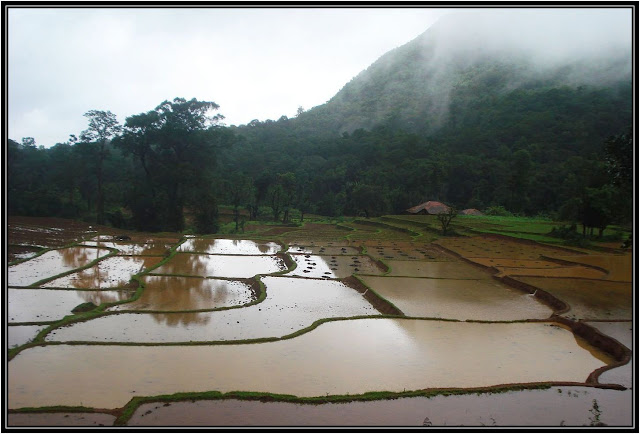 Jog falls is one of the most beautiful waterfalls in formed by ; it is also called as Gerusoppe falls and Jogada Gundi. Of course this is one of my favorite which I forgot to post. I have visited this place since I was a child still whenever is possible. Joga is one of the best idle places to visit and the most charming place on earth.
The majestic Jog Falls which falls from such a great height is a mesmerizing sight.
Waterfalls tumble side by side split by 4 called as Raja, Rocket, Rani and Roarer and backed by mountains hinting at the wildness of Sharavathi's backcountry views. Such tall and permanent waterfalls don't come like this often and it was easy to approach.
Distant view of the waterfall shrouded in rain clouds
Getting closer to the base of the waterfall
Posted by Rakesh Holla at 4:04:00 PM 6 comments:

Flipping through the pages of history, one comes across many ancient towns and temples with passage of time, the significance of these temples may have faded, but a closer look reveals the glories of the past. One such example is Madhu Kaitabha Temple of Kotipura.
This temple was built in 12th century by and at later stages Keladi dynasty seems to be associated with construction of this temple. The temple complex at Kotipura reminds of Chalukyan style of construction.
As we walked towards the temple, we were overwhelmingly attracted by its calm beauty.  Just as one enters the complex, on the left side lays a small temple below the ground level which innovated recently. Apart from the main temple complex which is filled with pillared structure to keep the roof from collapsing. Considering heavy rainfall in the region, it must have been a real challenge to build a temple which would not crumble due to leakage.
ASI resurrected some portions of the temple to prevent collapse. The layout of the temple complex seems to be well laid out by ASI, with numerous small Mantaps which may have been salvaged from nearby area to protect against vandalism. The Pillars and walls is quite superb sight.
It is 3 kms away from Kubetoor on the state highway proceeding towards Balligave. Basically there are 3 routes to reach this destination. One is from Balligavi up north around 25 kms, Next is via Jade towards Annavati via Kubetoor village on to the state highway towards Balligavi 15 kms. Next is obviously via Annavati or togarshi from NH 4.
I spent enough time inside the temple complex with my Udupi YHA team, I felt as if the worries of the world have been completely left behind and this magnificent piece of architecture made me ecstatically happy.
Posted by Rakesh Holla at 10:17:00 AM 4 comments: