Chikkamagalur is geographical confluence of Western-Ghats, Semi-Ggats and Deccan plateau which resplendent with its wide stretches of woods, coffee plantations, paddy fields and a scenic skyline is ostensibly the major highlights here and also noted for its enchanting natural scenery of Malnad. On the way to Halebidu if one deviate to the right about 200 meters from the highway is Belavadi. Belavadi is a small village also known as Ekacharanagar in Chikkamagalur Taluk it has a dilapidated Viranarayana temple a neat and huge structure in Hoysala style.
Viranarayana temple here stands majestically bearing testimony to the skills of architects of Hoysala era. This temple tells us affluent treasure of Hoysala architecture and a tale of the super craftsmanship and the high values of life embedded in stone by the people of that bye gone era.
Though the exact date of the construction of this temple is not known precisely, a Hoysala epigraph dated 1206 A.D., refers to some gifts made to this temple. From this it becomes clear that this temple was built prior to 1206 A.D. While the famous temples at Belur & Halebidu are known for their intricate sculptures but this temple is known for its unique architecture.
This is a Trikuta (3 tower) temple built of soapstone. But it appears that the western part was built first and the eastern part was added slightly later. The western part has a Garbhagriha, Sukhanasi, Navaranga and Mukhamandapa. There is a big Sabhamandapa, Sukhanasi and Garbhagrihas on the eastern side. And at north and south are Sukhanasi and Garbhagriha,
These two Garbhagrihas have Gopalakrishna and Yoga Narasimha sculptures, both of seven feet in height. The other Garbhagriha has a fine image of Viranarayana. This is six and a half feet in height and very imposing. He holds Sanka, Chakra, Gada and Padma in his four hands.
The horizontal friezes of the Bhiti or the wall are of the usual type consisting of mouldings. Above these are found sculptures of gods and goddesses below an eave. This is confined to the Garbhagriha and Sukhanasi portion only as the Navaranga in front is open type with Kakshasana. Above this rises the Sikhara in three tiers with Kalasha at the top. This portion including the Sikhara is typing the Sikhara is typically Hoysala in style. 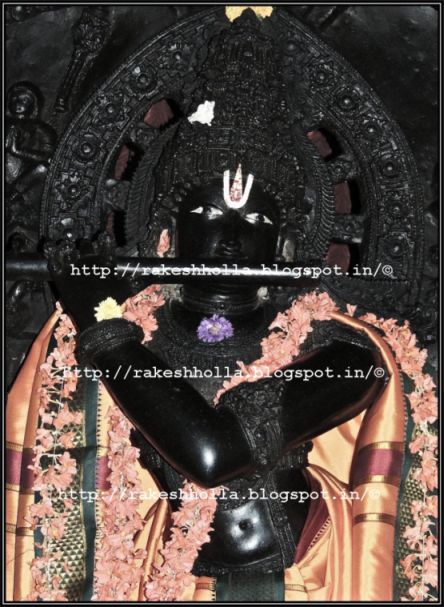 The western portion has sculpture of Yoga Naarsimha, Halayudha, Garuda, Pradyumna, Sri Rama, Krishna and goddess. The northern wall has Keshva, Lakshmi, Pradyumna, Narasimha and Mohini. The other wall has Vishnu, Parasurama, Kalki, Garuda, Varahi, Kalingamardana and musicians and dancers.
The Sabhamandapa is very large and has 46 round pillars of the Lathe turned variety. The ceiling panels inside the temple are a treat to watch especially Kalingamardana Krishna and Venugopala. The interiors have many varieties of ceilings with flat and deep lotus but type.
The sculpture of Venugopala in the southern Garbhagriha is very impressive. He is standing in Tribhanga playing on a flute. This sculpture of Krishna is more beautiful than the ones found in other temples. Similarly the sitting Yoga Narasimha sculpture in the northern Garbhagriha holding Sankha and Chakra and in Yogapatta is beautiful. Thus on the whole this is one of the very large Trikuta types of temples built by the Hoysalas.
Posted by Rakesh Holla at 7:05:00 PM 5 comments: 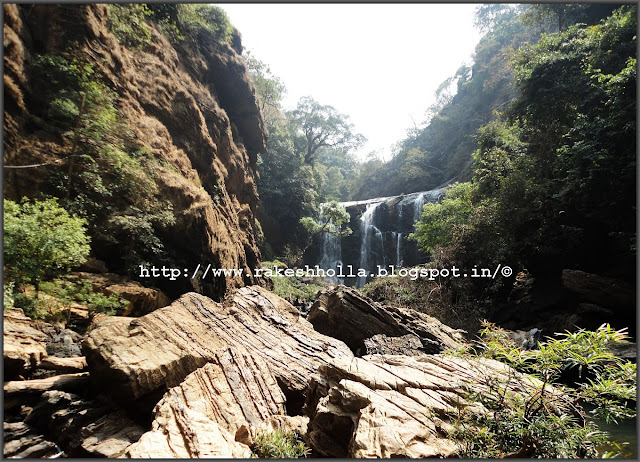 I visited the Sathodi falls during the February month with Manju and his group. I visited this waterfall twice in a year of time the first time I saw the falls in post Monsoon season we happened to show up fairly early in the morning so that couldn’t took good clicks against the sun. 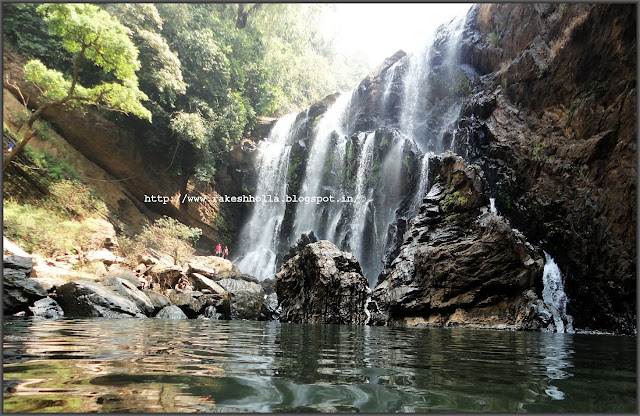 Considering that it was pretty hot and humid during our second visit at gorgeous sunny day thus I believe that the water volume I witnessed was probably either at its best on early summer or close to it. We had to pass through the back waters of Kodasalli along the rough mud track. The access to the falls was strangely not well defined trail leading to it. 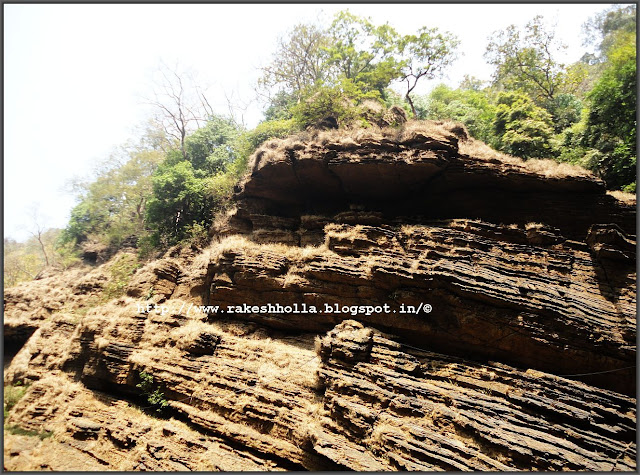 There are many streams that join together in the Kallaramane Ghat and cascade into a 15meters picturesque Sathodi falls. This is popularly known as the Mini Niagara. This falls forms a part of the Ganeshgudi forest range. It presents a great view when one sees it cascading down from a mountaintop with lush green hills as its backdrop. 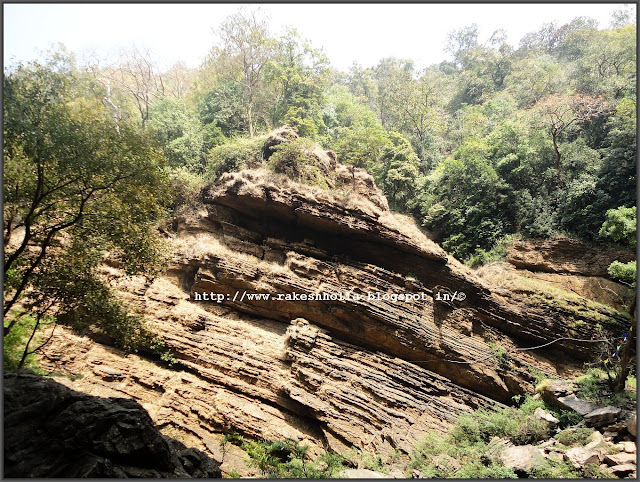 As it touches the ground it flows towards the backwaters of Kodasali Dam and finally mergers into it. The serene environment of the adjoining area is instrumental in attracting travelers to the Sathodi Falls. After Vehicle Park 10 minute’s easy walk across the Kali River back water laid us to the bottom of the waterfalls. 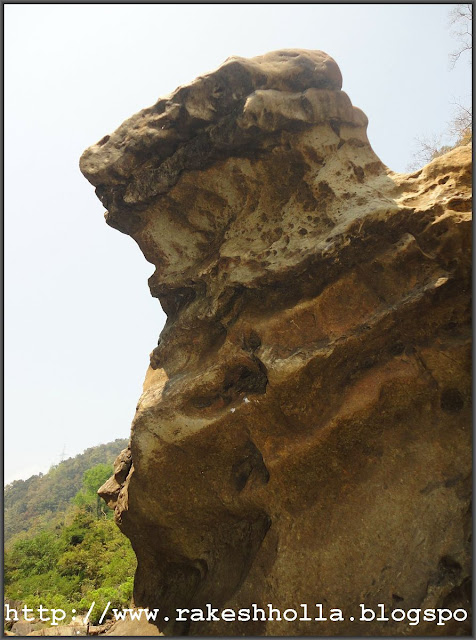 At that time, there were a handful of people cooling off in its waters or just chilling out in the shade caused by the nearby overhanging cliffs. The bright sun also made the scene very bright making it tough to take that long exposure shot which leaves the shady confines of the gorge and tumbles into an open amphitheater baked by the sun. 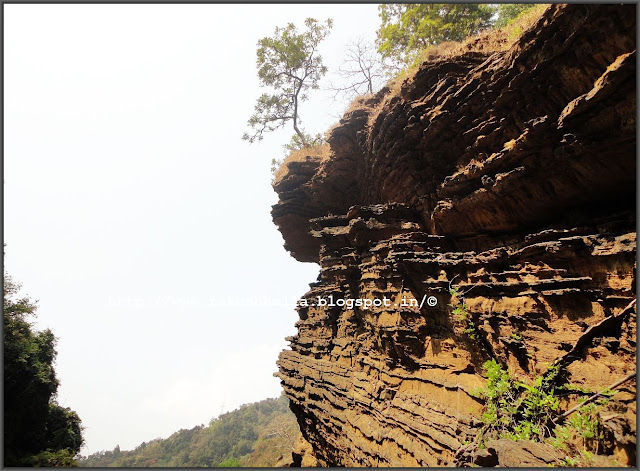 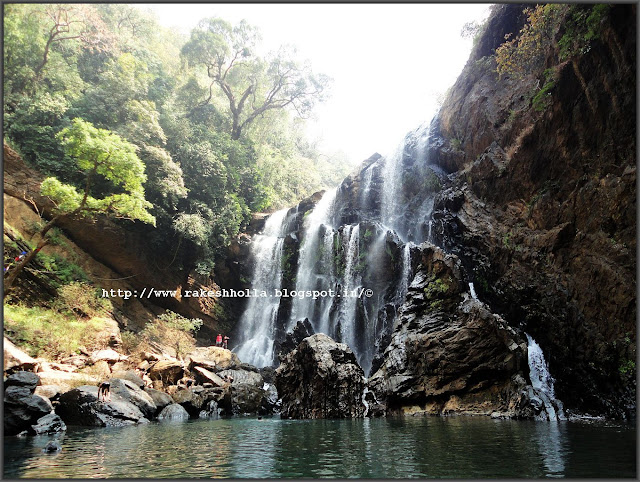 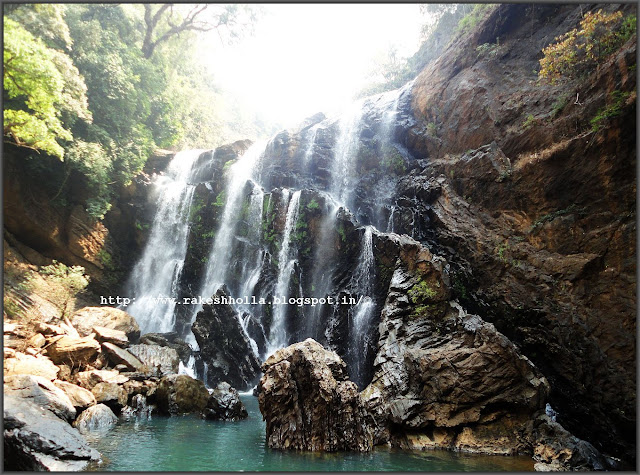 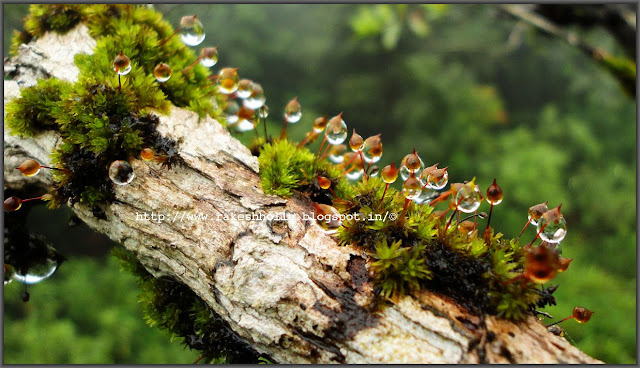 We got drenched at the winds as well as the maid of the mist, after spending for 30 minutes few of us decided to take bath on rime water and we also got to hear and feel the power of the falls from very close distance. There was solid composition of red, crystalline limestone. The mighty rocks have been roughened by the vagaries of burning Sun uncontrolled winds and torrential rains. 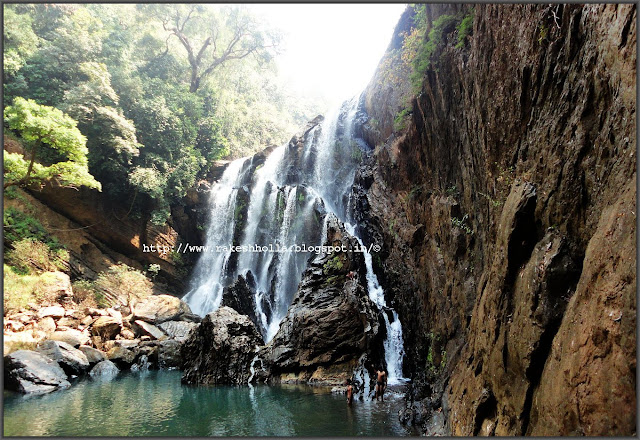 This waterfall caused the rocks of this layer and those layers underneath to erode and break away the falling rocks some larger than a house fell down to the stream bottom. It is these rocks which restricted the water flow of the Sathodi which has resulted in the rapids in Monsoon time. 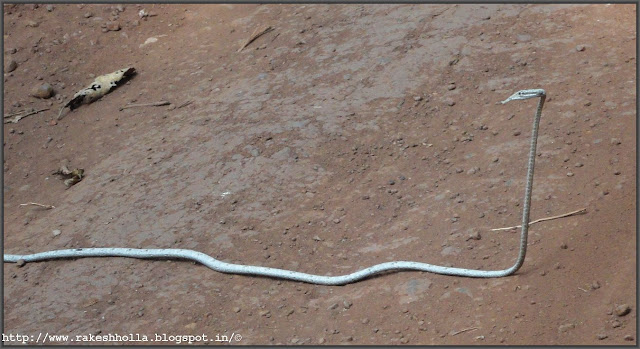 Ahaetulla nasutus Variety Isabellinus Vine snake Non venomous. They have a slender but long body with a pointed head. The pointed beak-like nose and the horizontal eye slit is characteristic of these snakes. Its head is the same width as its body. The under side of the body is light brown or yellow. When threatened it flattens its entire body to exhibit the white and black color present between the scales. They are so completely blended in their surrounding environment that they are almost invisible. 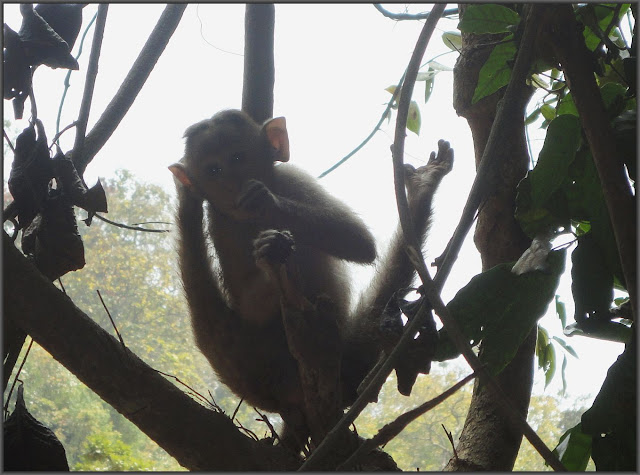