There’s more to monsoon in Kollur, the magic of the mist filled Ghat, the sound of thunder, the howling wind and the lashing rain is an invitation for an Intrepid Nature Lovers. The fresh scent of wet earth, monsoon flora and mist also attract the travelers to try out explore new waterfalls in this part. The whole area becomes green and hop on to a bike, riding on woods to get drenched and savor nature in all its rain soaked splendor, the cold wind cuts through the coat sometimes it rains so hard that we struggle to ride on but I believe that being exposed to this ferocious element of nature toughens our spirit for further journey. 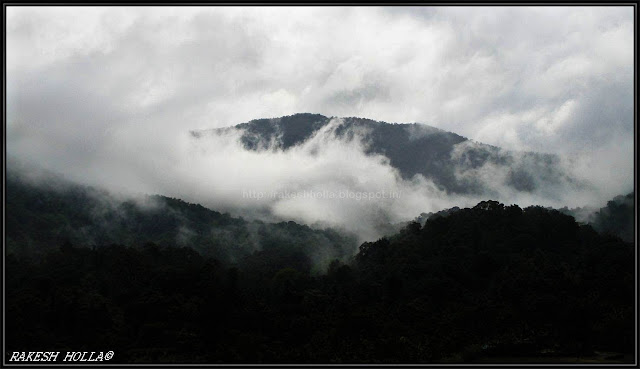 The best part is that the rain is incessant in this part if shower starts its continues for long time and then it clears up. In late June on a very rainy day I started together with my wife early in the brumous Sunday morning from Kollur. On a whim I decided to hike to Kombukodlu waterfalls so I set off with my backpack. I was so eager and impatient to get started. 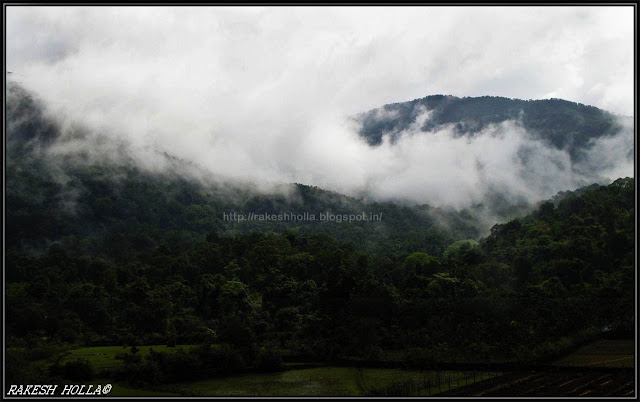 Early in the morning I and my spouse after a nice breakfast, clothed raincoats and we bought few essential things and soon got ready to set off on the mud road with my motorbike. We get on the mud road and I found some very steep and rugged terrain throughout my biking. It is full of many hills, woods, vast paddy fields, small mountain villages, quick turns, and obstacles to overcome. I was touring north and I ended up in the mountain village within sight of the Kodachadri. 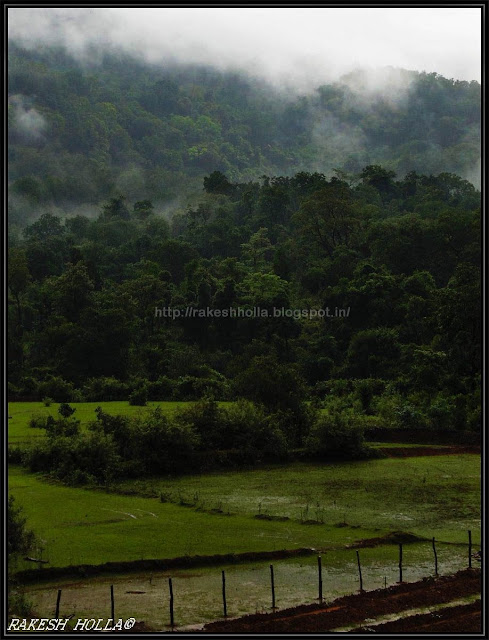 After a few minutes on a quite good drive we crossed a small bridge and found another small path leading through huge trees and bushes right to the Village. Normally all of this would have been a really easy thing, but after it had been raining for the whole last week the complete area was flooded including the path which we wanted to take. The road was so muddy that it’s a combination of dirt and little grass’s; in those conditions weather plays a huge role. The rain created more than 2 inches of thin crust of mud. I continued working my way up to the deep forest zone towards the waterfalls.

After driving half an hour through the area we got totally stuck in one place but we were lucky enough to find a really nice man who cleared the obstruction and he told us that we will get nice view at Goligudda village which was just fifteen minutes away from the place we got stuck. Full of enthusiasm my wife and I again dressed up into our raincoats and started the further level. 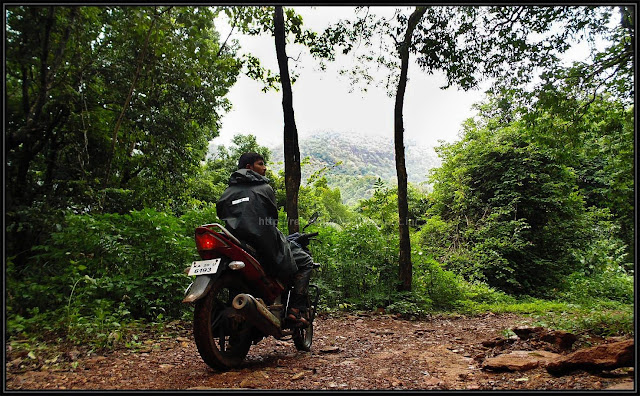 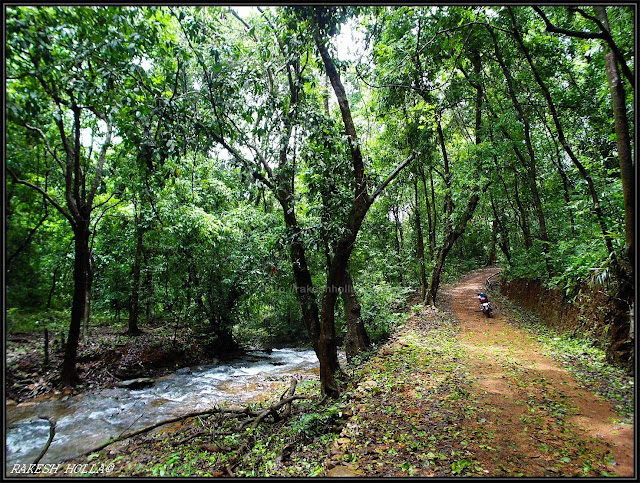 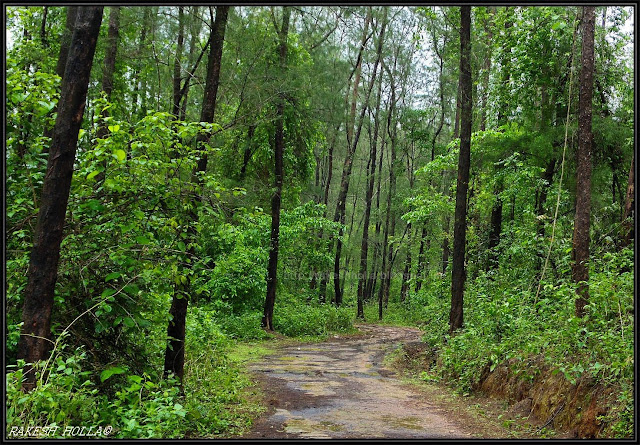 After 45 minutes hard, strenuous Biking took us to highland hamlet with panoramic mountain views and finally able to see the waterfalls, view was just Glorious. It was really awesome to watch the water flow while I was standing on edge of the hill, just opposite to the waterfalls and I get enough of wonderful impressions. Since the rain became slowly heavier I took my umbrella over my camera and did my first shots of this absolutely awesome waterfall. 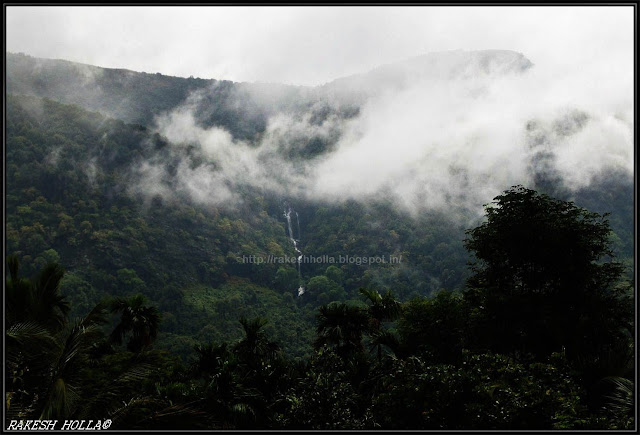 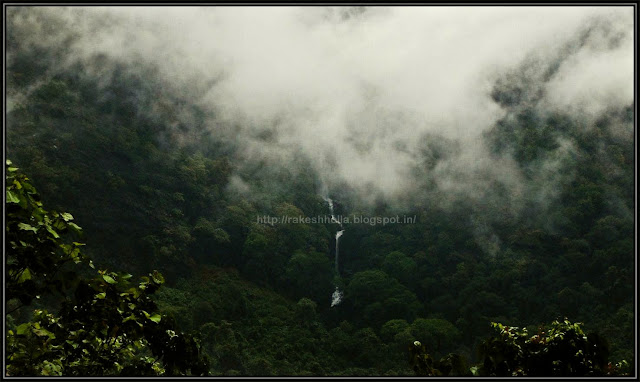 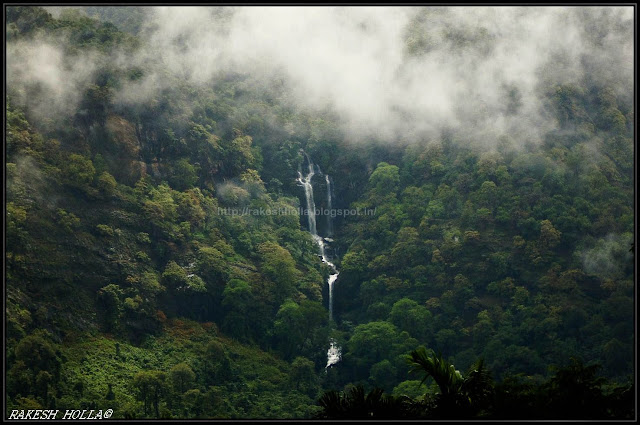 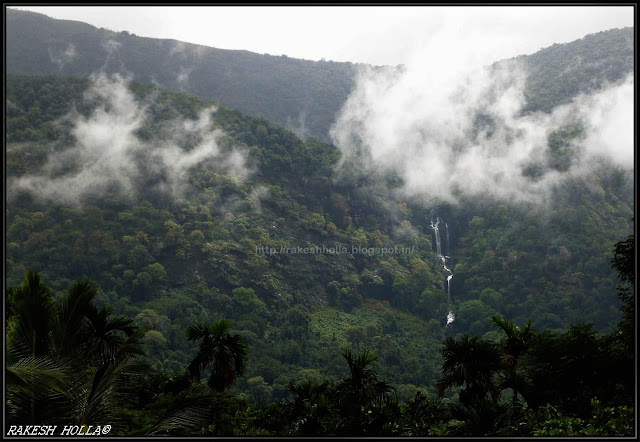 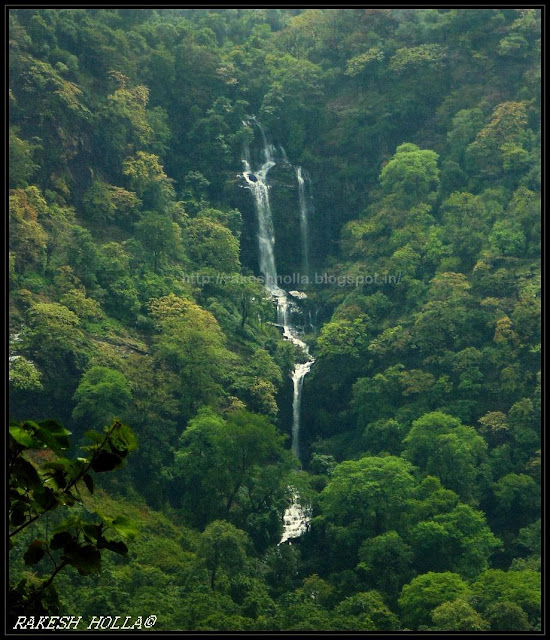 I was fascinated by the waterfalls running into a deep blue gap between lush green mountains and my photographer’s heart started beating faster. The waterfall is in the middle of the lush green forest so it seems simple enough to find this spot. The path from the village to the waterfall has stunning sights along the way, but it was a terrifying climb with a backpack, and a foolish risk to take on rain. Continuing down the creek, I was surprised to discover a trail. 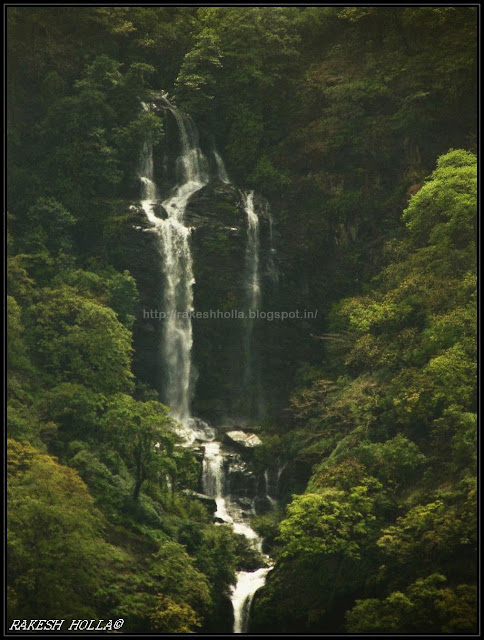 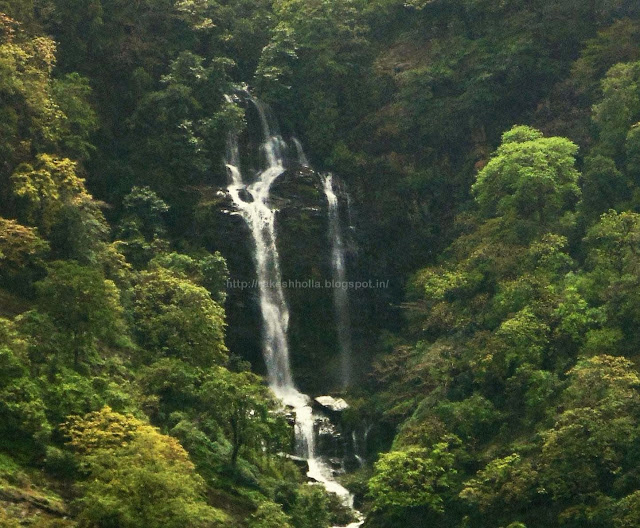 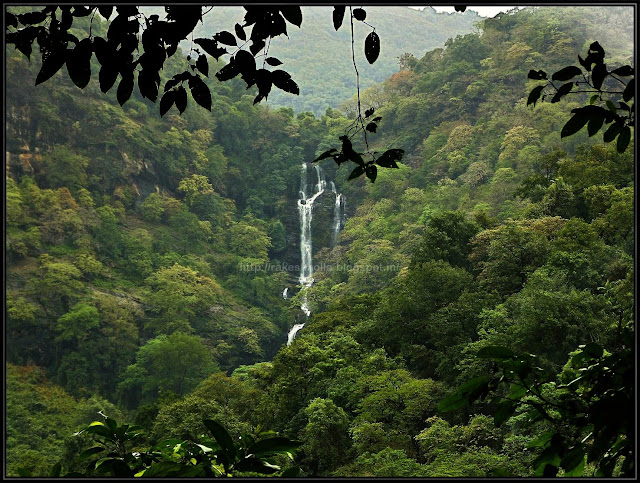 I find small trails peeling off to the left that keep leading you up the mountain to some rock outcroppings but eventually the path just turns into an animal trail with rough shrubs. The first time I witnessed 2 king cobras in very close distance it was a stunning moment in my life, first I sighted smaller one and on the way while walking along the periphery of the hill, a rustling sound caught my attention. 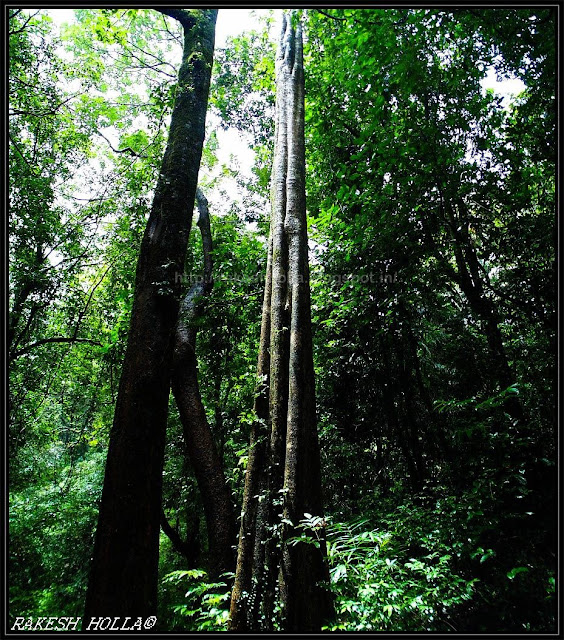 I guessed it may be a huge snake and only hoped it would be a King and just as I had hoped I was rewarded with the sighting of an eleven foot highly venomous King Cobra. I was finally here with the same mystical and adventurist feeling to exclusively look for King cobras. I couldn’t take clear photos of that but really it was unforgettable moment. 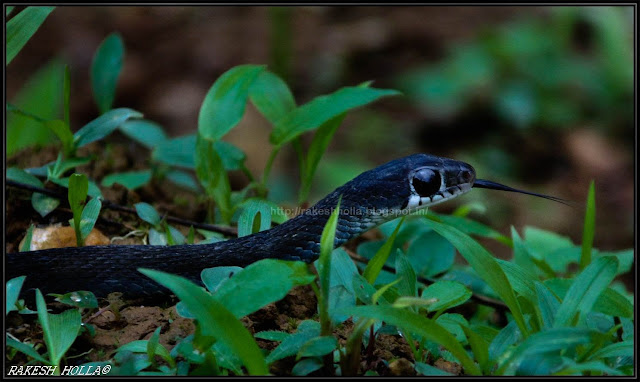 Once again rain started heavily and it poured for long time I could hardly see anything three feet ahead of me. The strident sounds of the cicadas and birds were lost to the rattling noise of relentless downpour, croaking of frogs, and sloshing sounds of my own footsteps marching through half foot deep mud track. All of this in wild includes deadly sucking leaches spoiled our journey, we decided to get back, not to take extra risk and kept pending this waterfalls for next time. 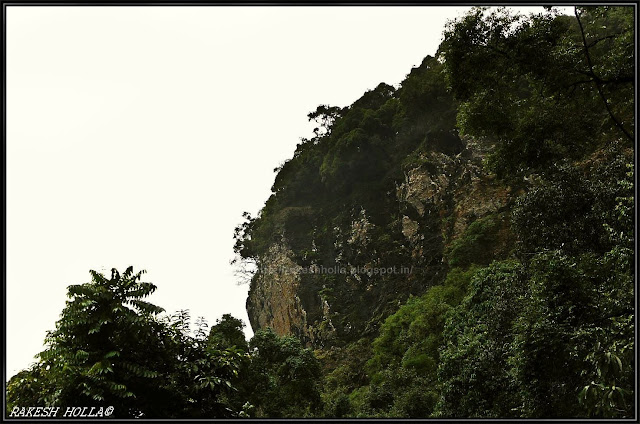 The Western Ghats occupy a special place for the coastal folk of western India. They are responsible for the fantastic monsoons that we experience. The Ghats act as barriers to the heavily pregnant clouds that drift from the south west which eventually give in and we are blessed with rainfall. This climatic condition has greatly influenced not only the lives of humans but also denizens of this green region. Home to a wide variety of birds, animals, reptiles and thousands of species of plants, the Ghats are a biodiversity hotspot. Fresh life bloomed everywhere, mushrooms, orchids, and fungus! Leeches seemed to rise from the dead and spread out like a live carpet. With 99% humidity and absolutely no sun, nothing would dry. 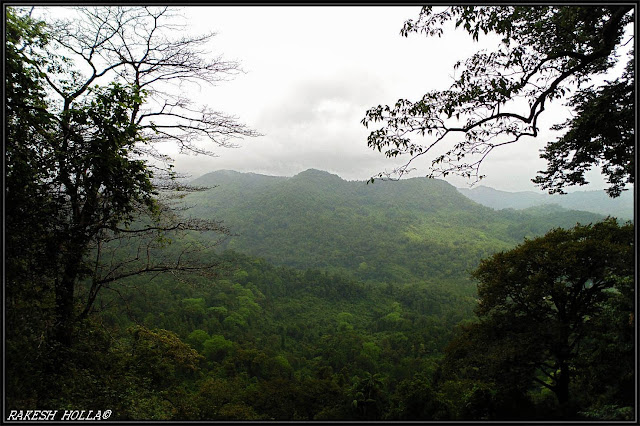 There was a certain energy flowing through the forest this particular in Monsoon. Everything seemed so full of life, with a keen sense of fear claiming the very thoughts of those in the forest and those living around the edges of it. Here rain fell heavily on the leaves of the thick evergreen trees. Each droplet of water falling silently onto the ground below where there prowled a large creature with a silent gait. The deep blackened fur blended with the shadows around the woods and created striking mirages of creatures thought up by the minds of the fearful, of the guilty, of the weak that were easy to prey upon. 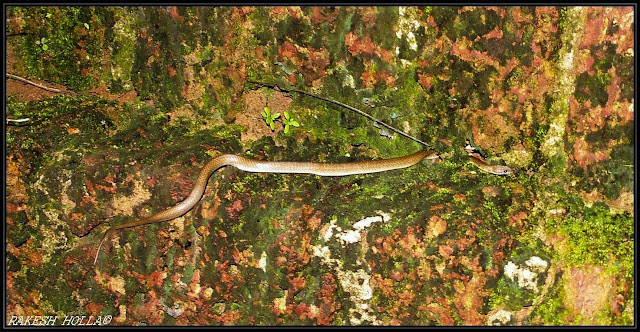 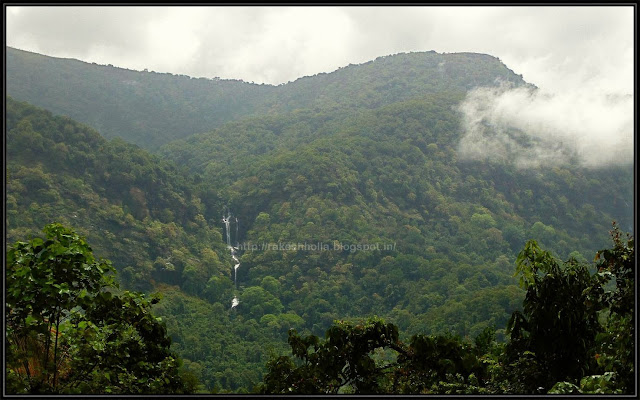 After a heavy rain when the sky clears, we saw the Kodachadri, a view that most people don't get to see from that angle. A lot of fun stuff happened on our bike ride. You're more in the environment when you're in a bike. It's enjoyable. Even when it’s raining It's more fun and escapade. After a harsh drive we were turned to have ride in Nagodi Ghat, the newly constructed concrete road in Nagodi Ghat has turned erstwhile nightmarish route into one of the most enjoyable driving locations. 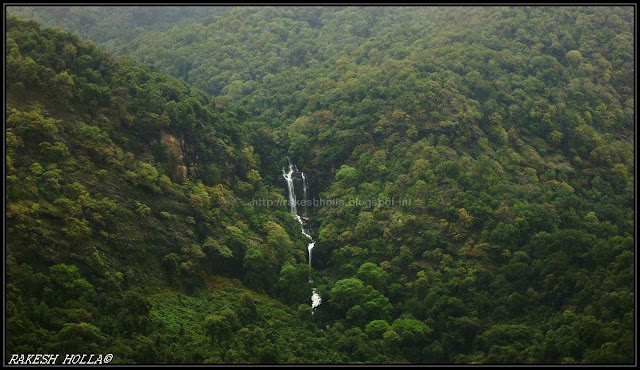