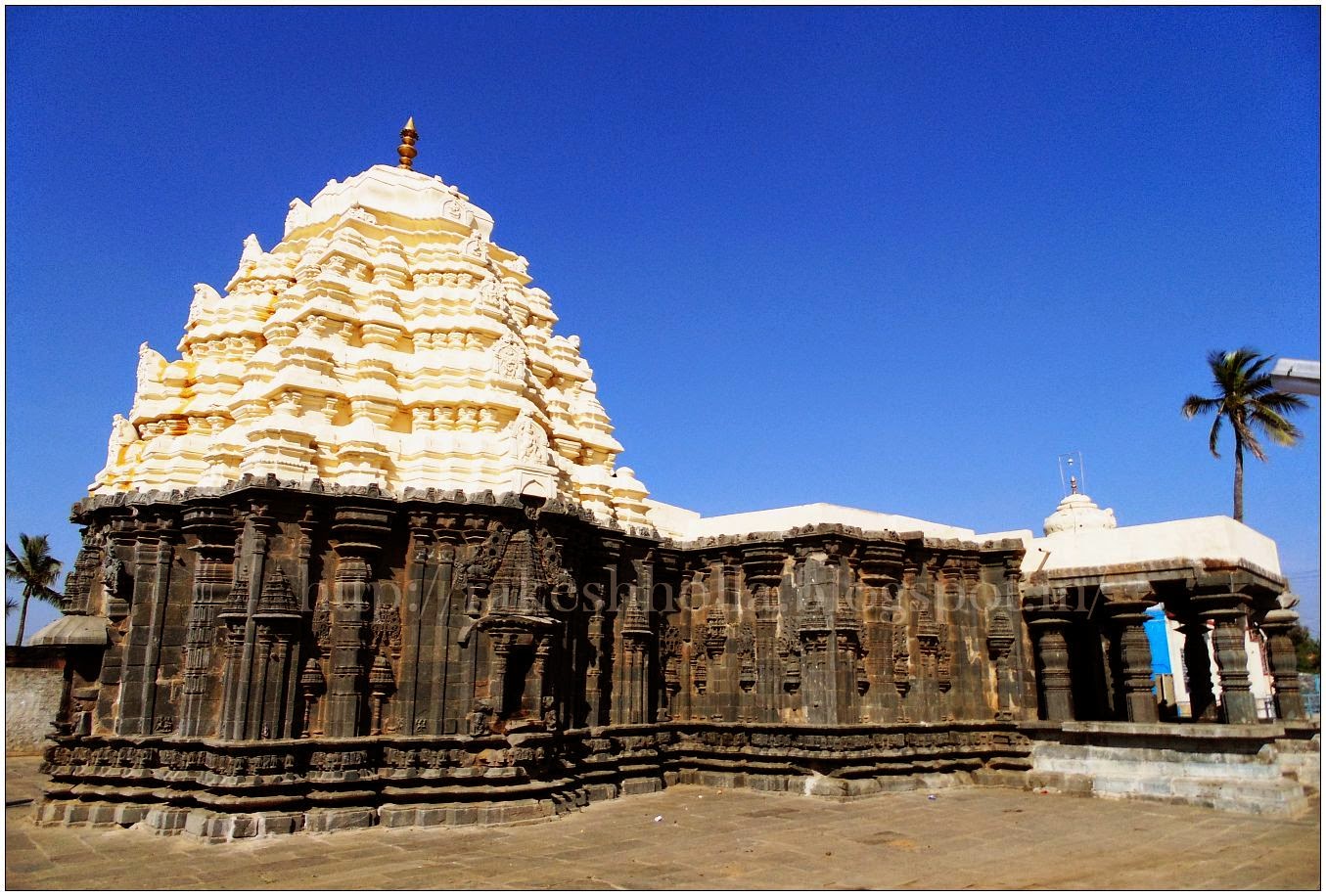 The trail to Golden Era...Part 3
Kuruvatti is a village in Hoovina Hadagali taluk, Bellary District is 35 km from Haveri, and 30 km from Harihar. It is a picturesque village on the bank of river Tungabhadra and a pilgrim centre in the district. Legend has it that, Kuruvathi got its name because the Lord Basaveshwara (Nandi) came here to heal the Kuru - the wounds of the devotees. The holy temple is dedicated to Nandi who is in the form of a bull. It is believed that Lord Nandi came here in search of Lord Shiva (Mallikarjuna) found him on the bank of Tungabhadra River, sat in front of him and started worshiping him from then on. The Kuruvatti temple is particularly noteworthy for its exquisite bracket figures, carved screens, polished pillars, and tiers of friezes showing  rows  of  birds,  animals,  dwarfs,  and  figures  of  musicians  and  dancers. 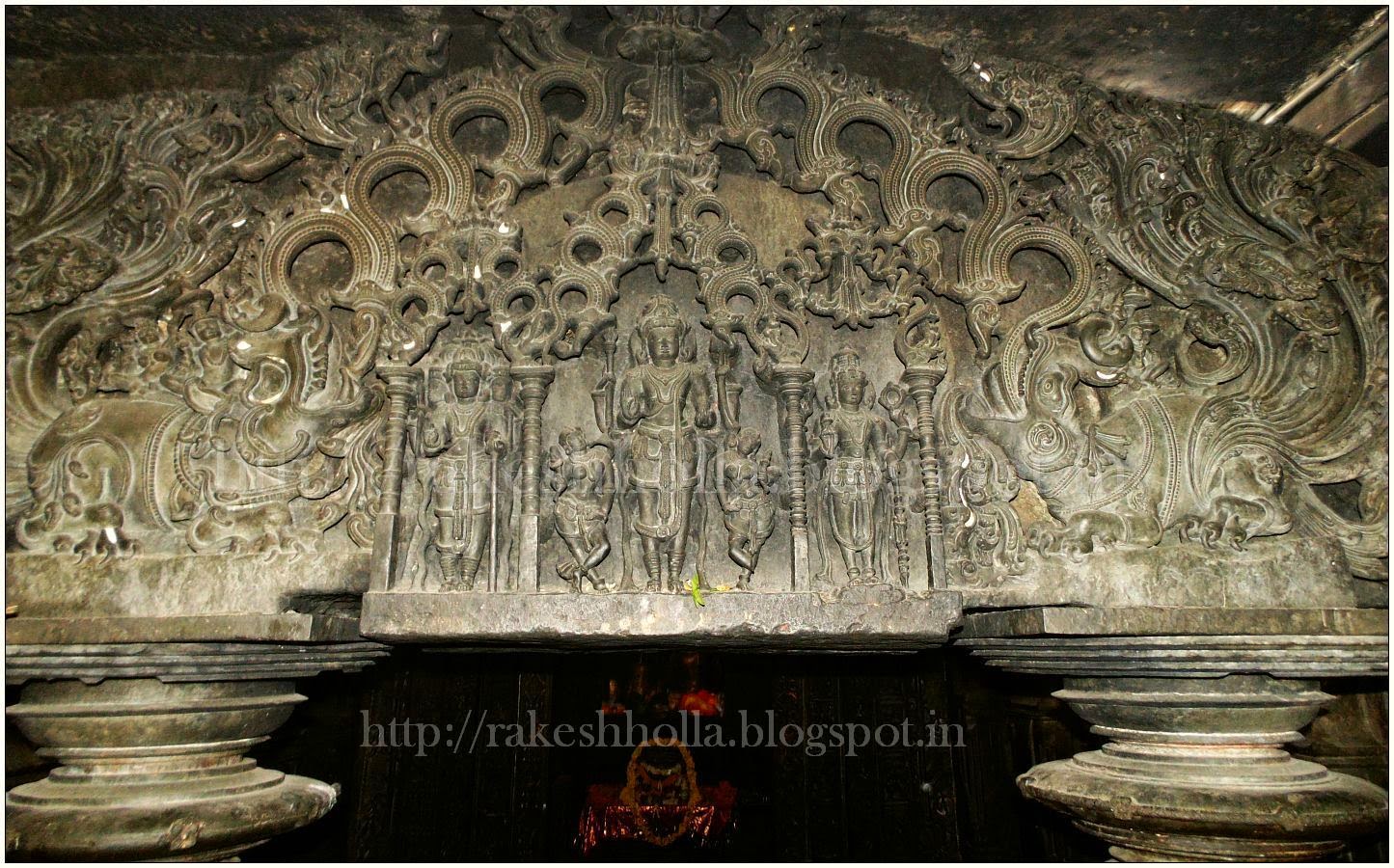 The earliest rulers, known from inscriptions, were the Chalukyas of Kalyana (Western Chalukya). All of the Chalukya inscription are from the reign of Vikramaditya VI. Few inscriptions are from the Gutta kings also ruled under as the subordinate of the Chalukyas. When the region came under the Hoysalas, Kuruvatti became an important center as their rajguru, Lokabharana, made this village his abode. Many inscriptions of the Hoysala period mentions Lokabharana as the Rajguru of the Hoysala king Ballala II. The chief queen of Ballala II, Padumaladevi, also made a grant at Kuruvatti to god Ahavamalleshvara. The village would have acquired quite a reputation during that period that it has been referred as Dakshina Varanasi in one of the inscription. According an inscription of 1099AD. mentioning a grant of land, taxes and money made for the service of the god Abhinava Somesvara. The memory of Somesvara I’s voluntary drowning amidst din of waves and of all manner of musical instruments, seems to have been kept particularly alive during the region of his son, Vikramaditya VI, who considered himself the heir to his father’s empire and also it records elaborate institutional arrangements for upkeep of the temple Abhinava- Somesvara, gives detailed genealogies of the political participants in the town and establishes Kuruvatti as an important Kalamukha center. 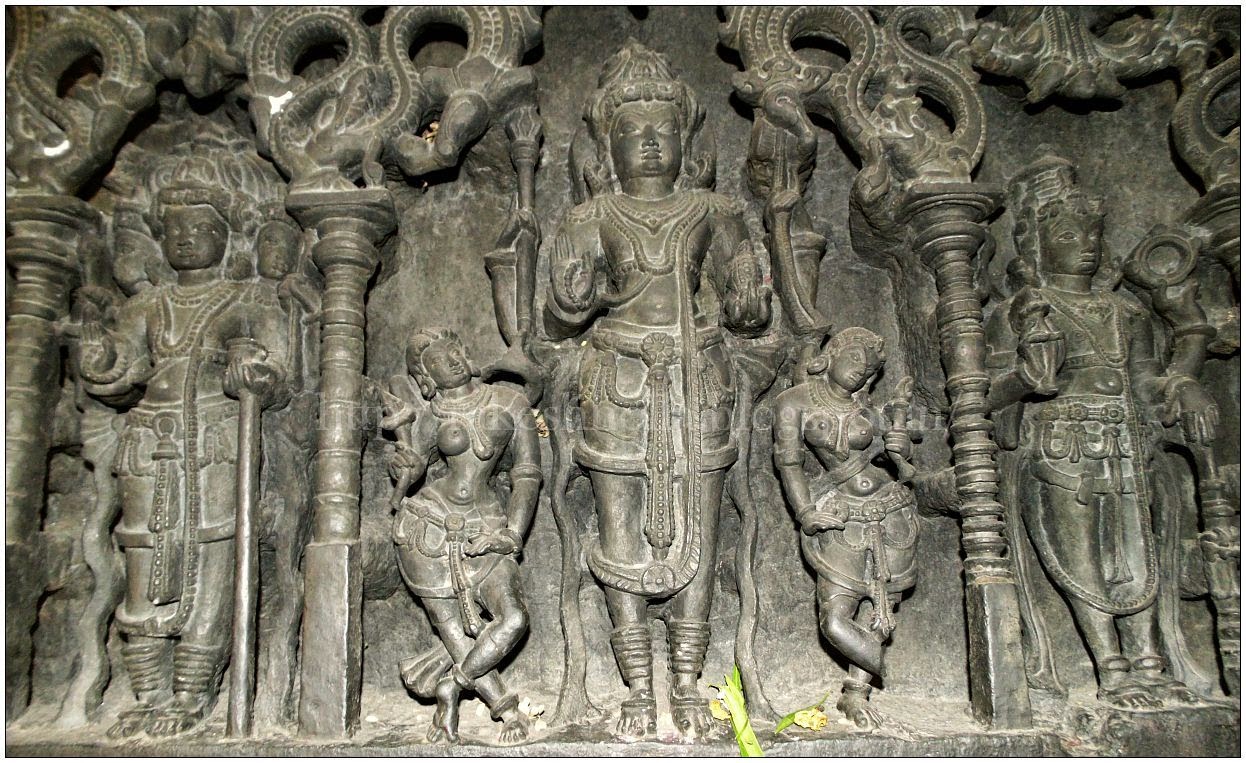 This east facing temple is consisted of a garbhagriha, an antarala, a sabha-mandapa with two mukhamandapas on north and south and a detached Nandi mandapa in front of the sabha mandapa. The two mukha-mandapas on north and south are the two entrances into the temple; the third entrance is from the east. The Nandi mandapa has the original Nandi now under a modern construction. 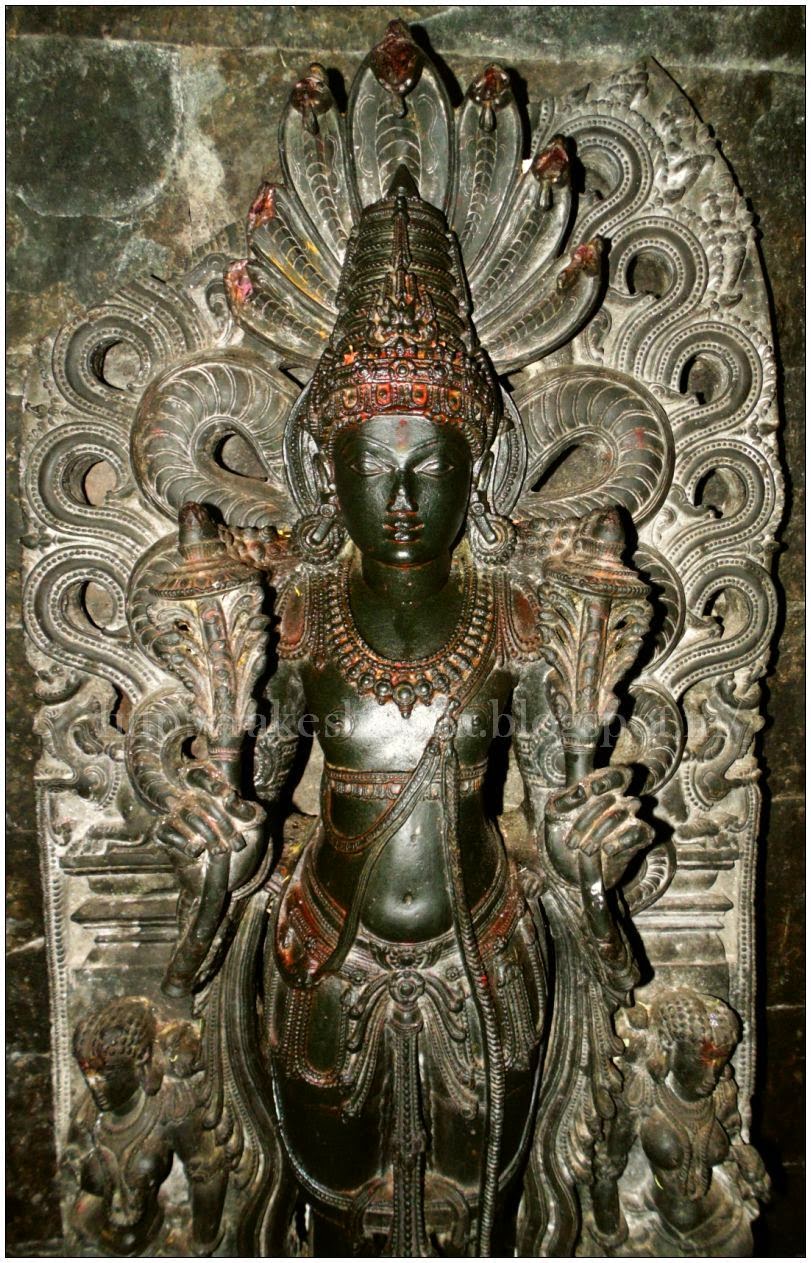 Garbha-griha is a square room with no decorative element inside. It enshrines a Shiva Linga resting over a large Pitha. The pillars inside must have been made by using a lathe. There is no comparison to the richness of this pillar base. The pillar head at the entrance is sculpted with beautiful aspires. 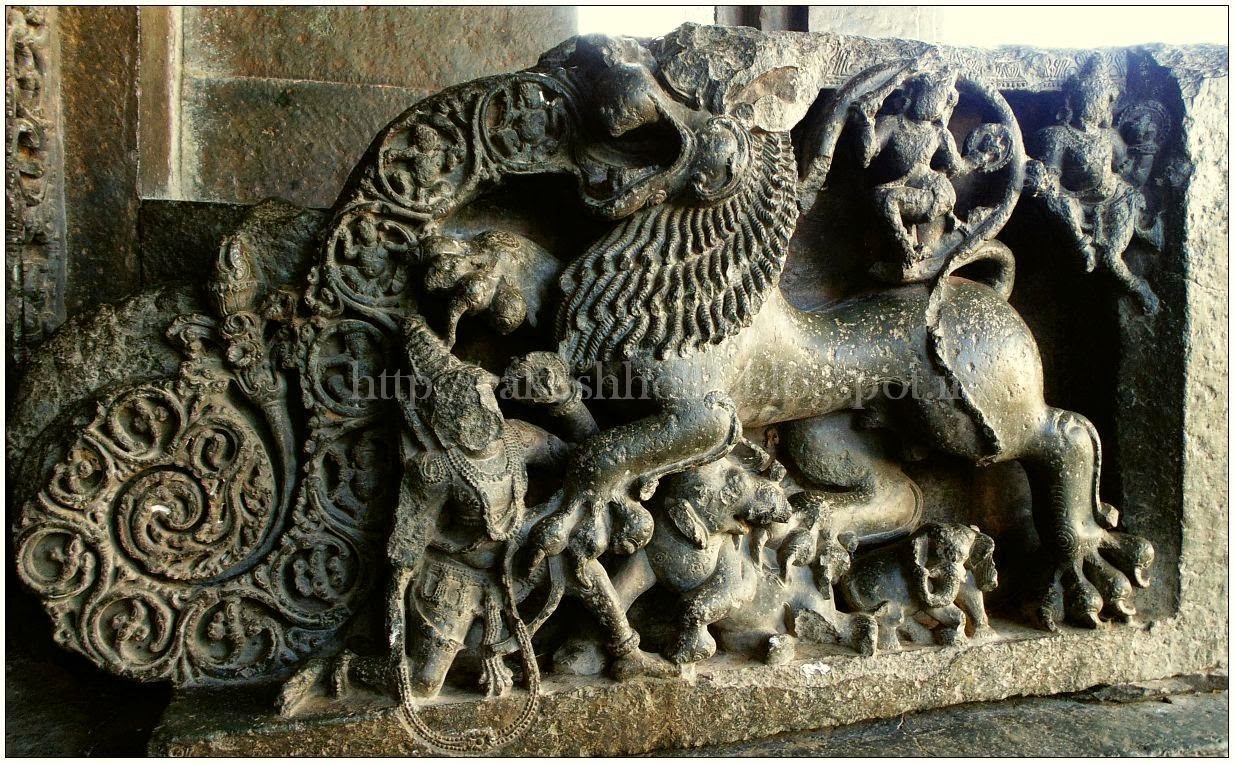 The temple framed by a looped Torana whose lineage can be traced back to the Kashivisvesvara temple at Lakkundi. However they conceptualize the motify differently. In Kuruvatti the looped Torana is isolated as adistinct motif, a Makara Torana with makaras spewing the loops upward. 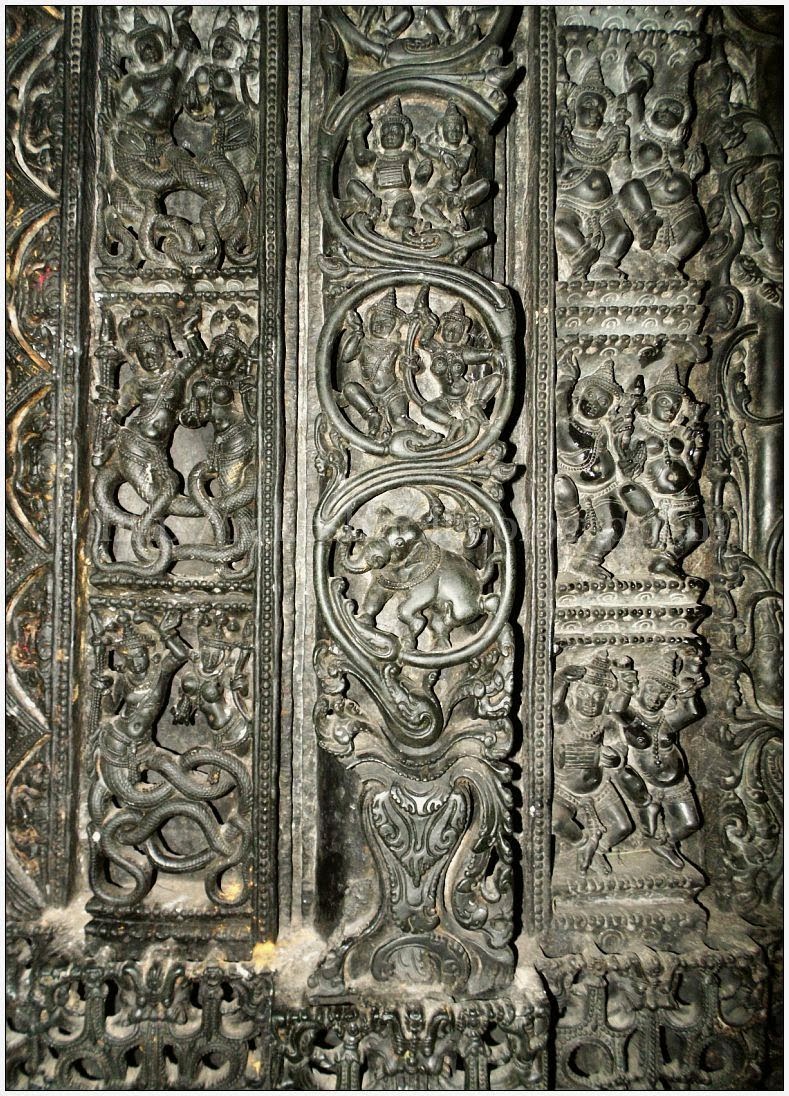 The Torana with Makaras spewing the loops upward. The Torana is also treated as part of the wall, so that the spewing Makaras are shown perched on wall pilasters and the loops, taking a much more triangular profile around the wall shrines tower, only reach the lower edges of the superstructure. That the idiomatic distination between Lakkundi, Ittagi and Kuruvatti was made by craftspeople can be understood in the treatment of the same idea in 3 different temples. 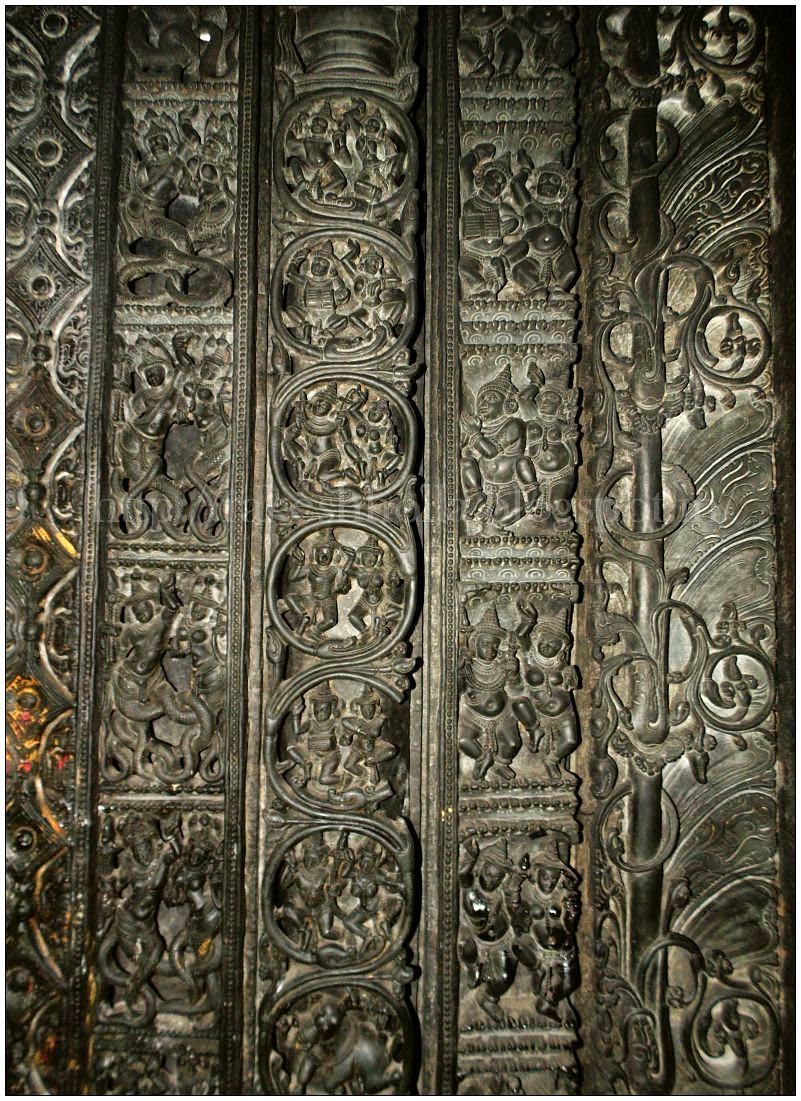 The walls of the room have been divided into two halves by inserting a horizontal slab. This slab would have used to keep ritual paraphernalia and movable images. The Antarala does not have its door but instead it has a Makara-torana supported on two free standing circular pillars. The niche formed by loops emerging from Makaras has Shiva in middle and Brahma and Vishnu on his either sides. 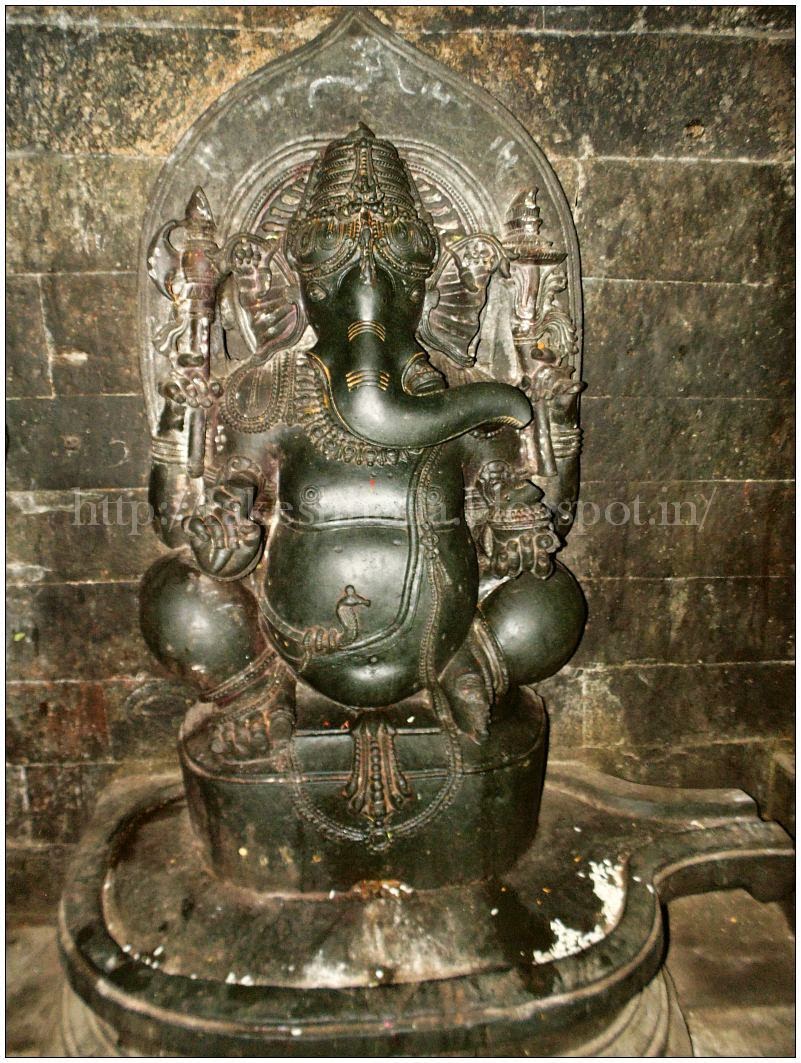 Few images are kept inside this Antarala. Two images of devotees, one showing a couple and one showing two ladies, an image of Bhairava and Shiva. The Sabha-mandapa is supported on four massive central pillars which has square block at the base. This square block is exquisitely carved on all its four faces. There are three entrances to this Sabha-mandapa, one each on south, north and east. All the entrance doorways are profusely carved. The Kuruvatti temple is particularly noteworthy for its exquisite bracket figures, carved screens, polished pillars, and tiers of friezes showing  rows  of  birds,  animals,  dwarfs,  and  figures  of  musicians  and  dancers. 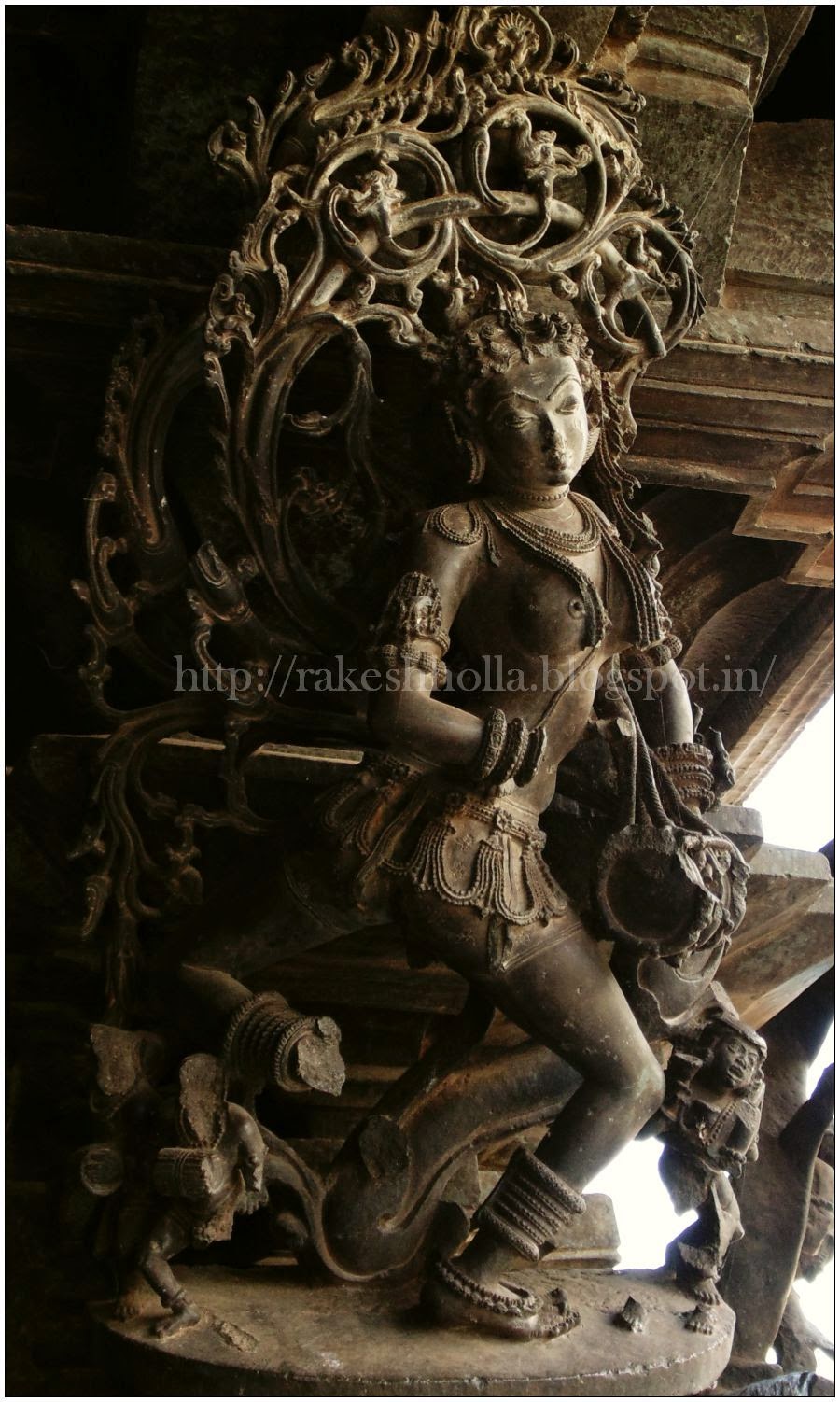 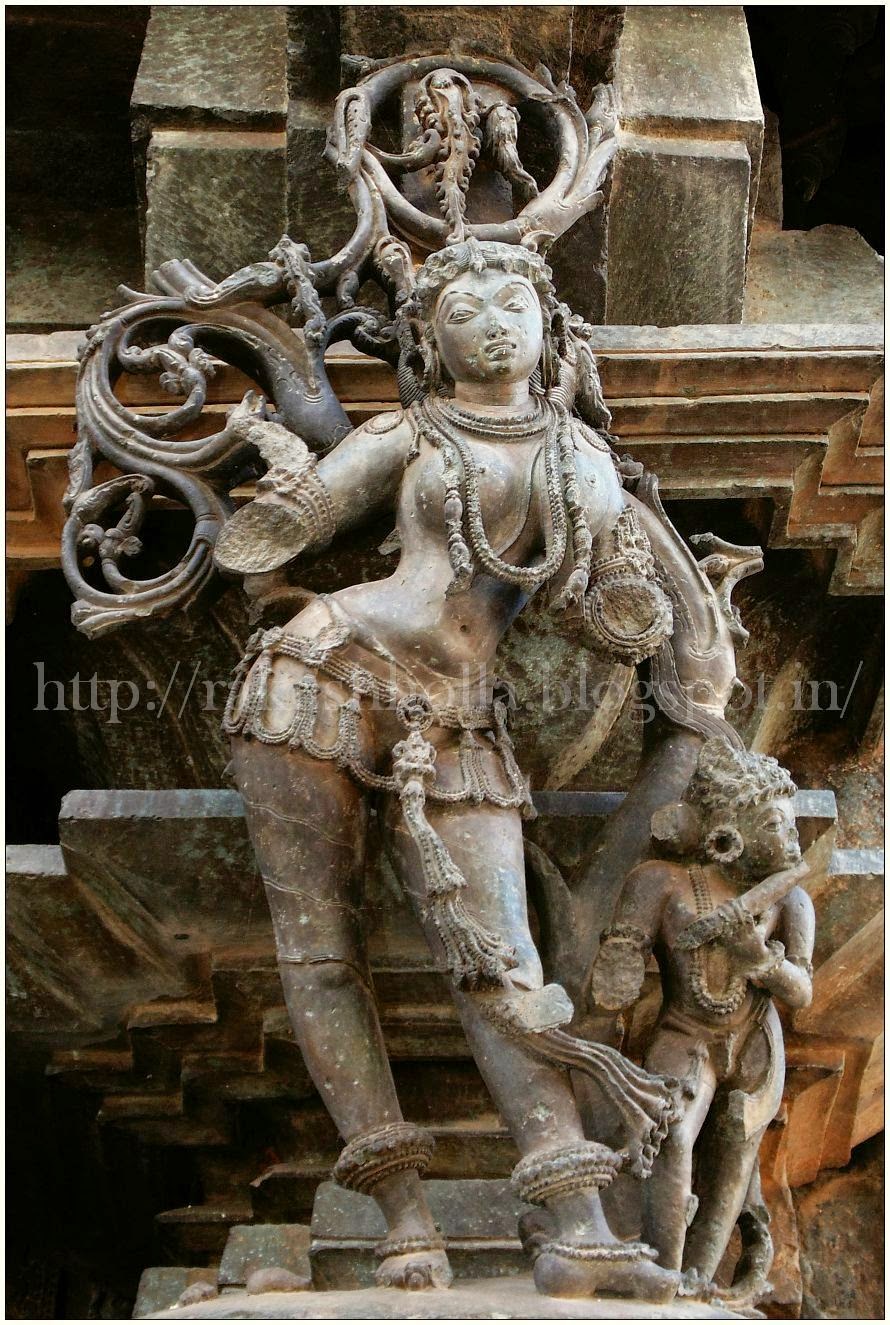 There are three bracket figures left on the eastern entrance. The other bracket figures have been moved to various British museums during their rule. These bracket figures have been considered among the best specimen of the Hoysala period. James Fergusson writes ‘All the details are sharp and the carving so good that even at Halebid it would be difficult to prove out any individual piece showing more complete mastery over the material than the brackets representing female figures with encircling wrath on the fronts and inner sides of the capitals at the east entrance’. 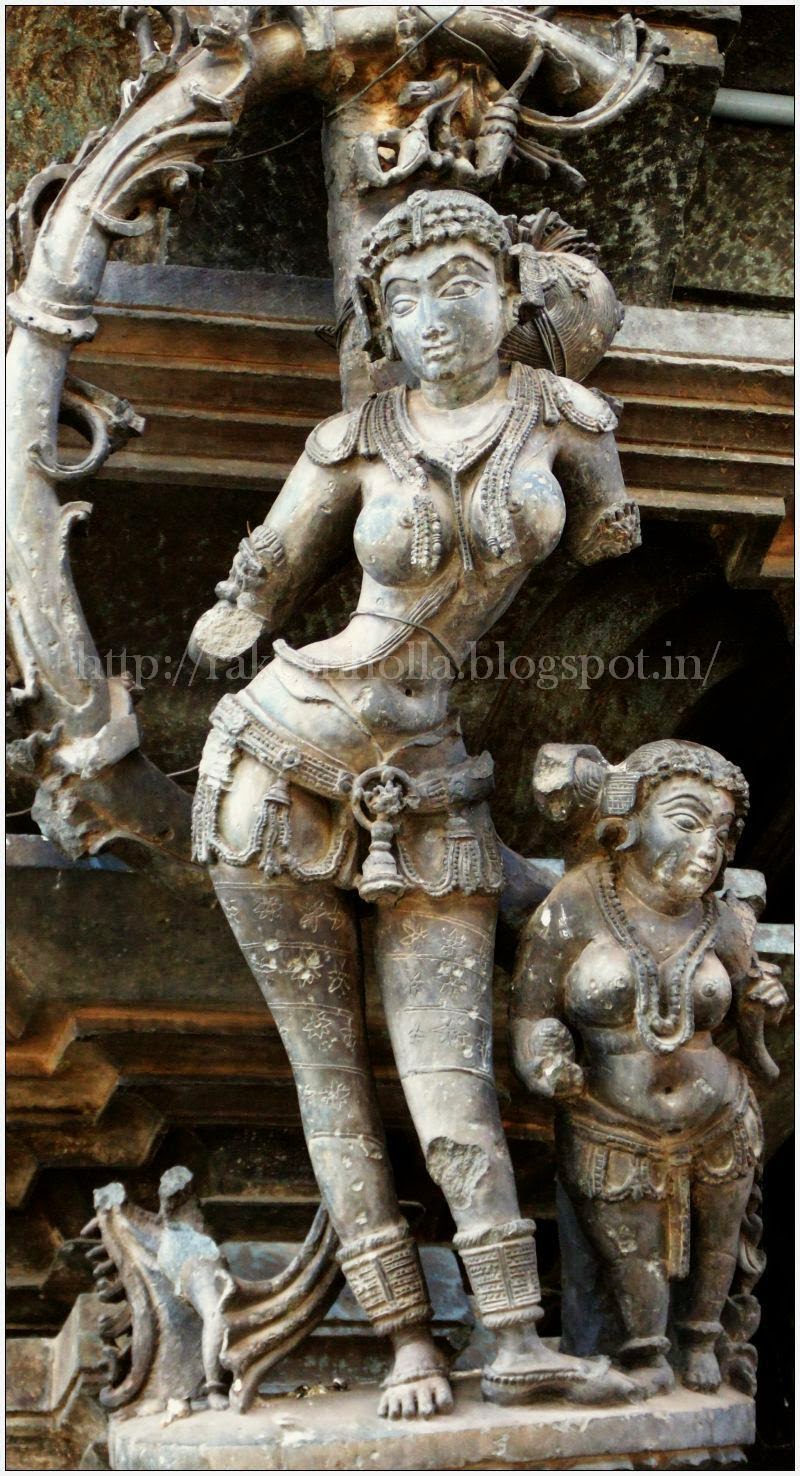 There is a royal image put near one of the entrance. Many scholars have suggested that this could be the Western Chalukya king Someshvara with his two queens. As no inscription is found over it hence nothing can be said with certainty however as the temple probably was constructed in memory of this Chalukyan king so it will not be odd to carve out this image also in his memory. 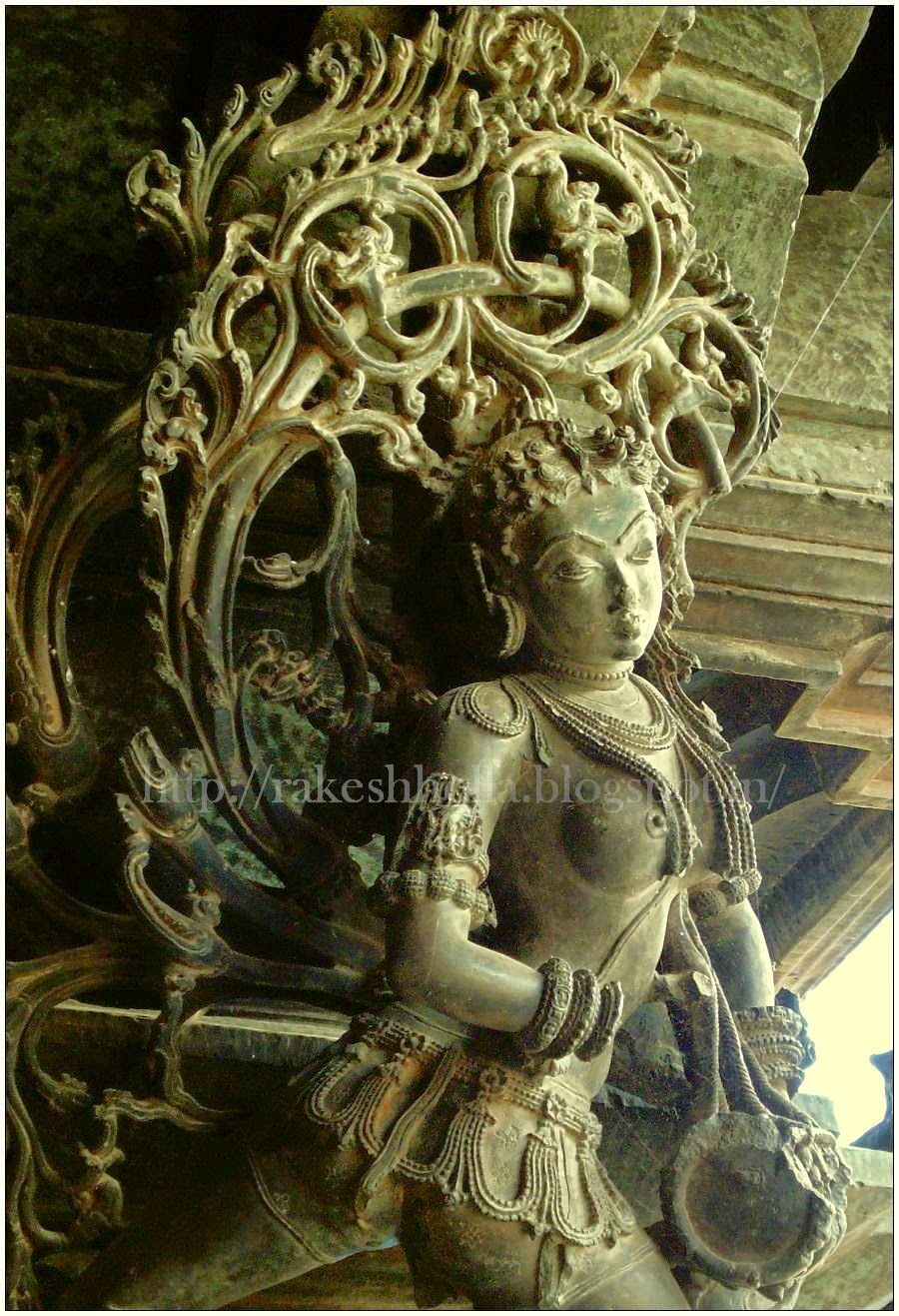 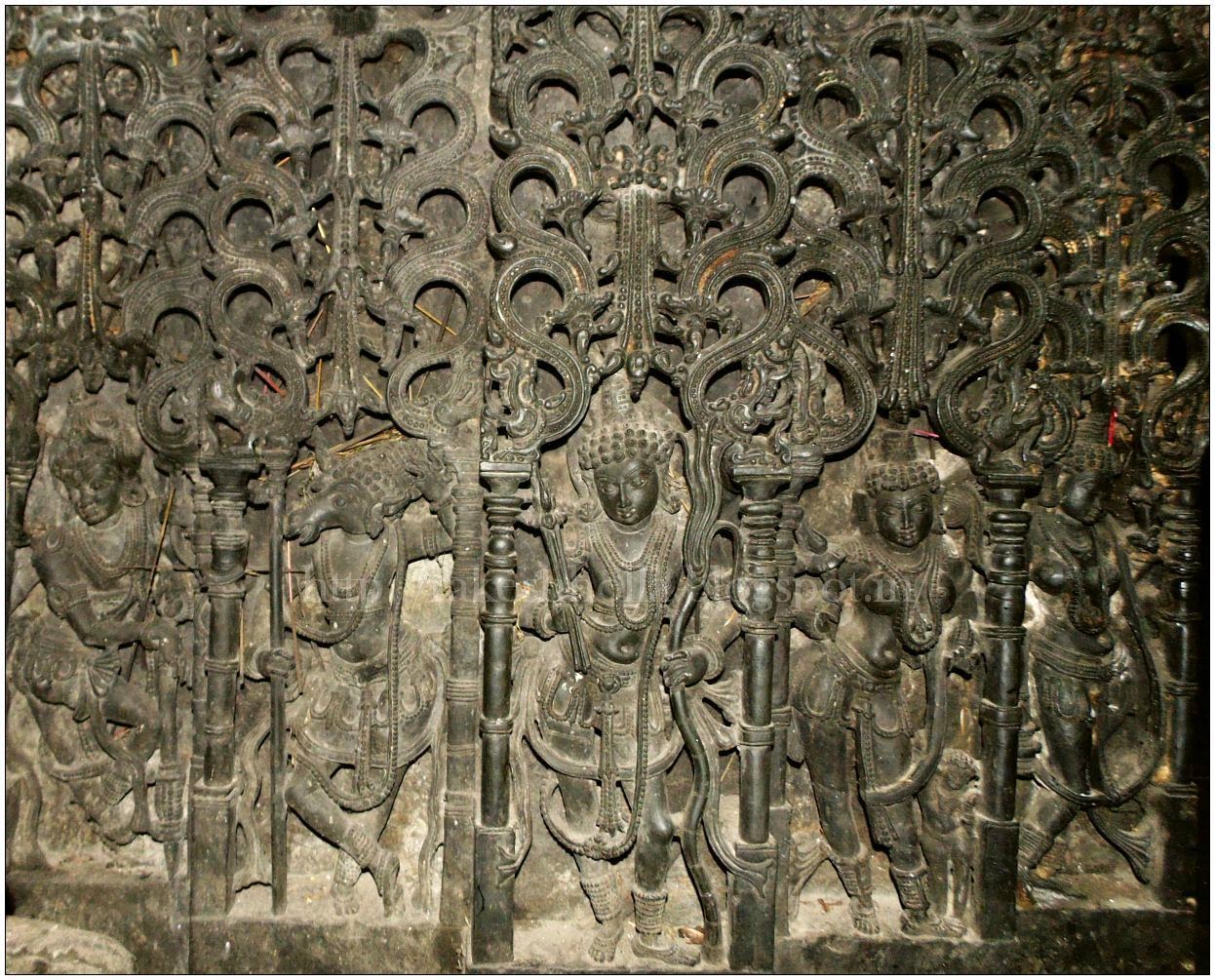 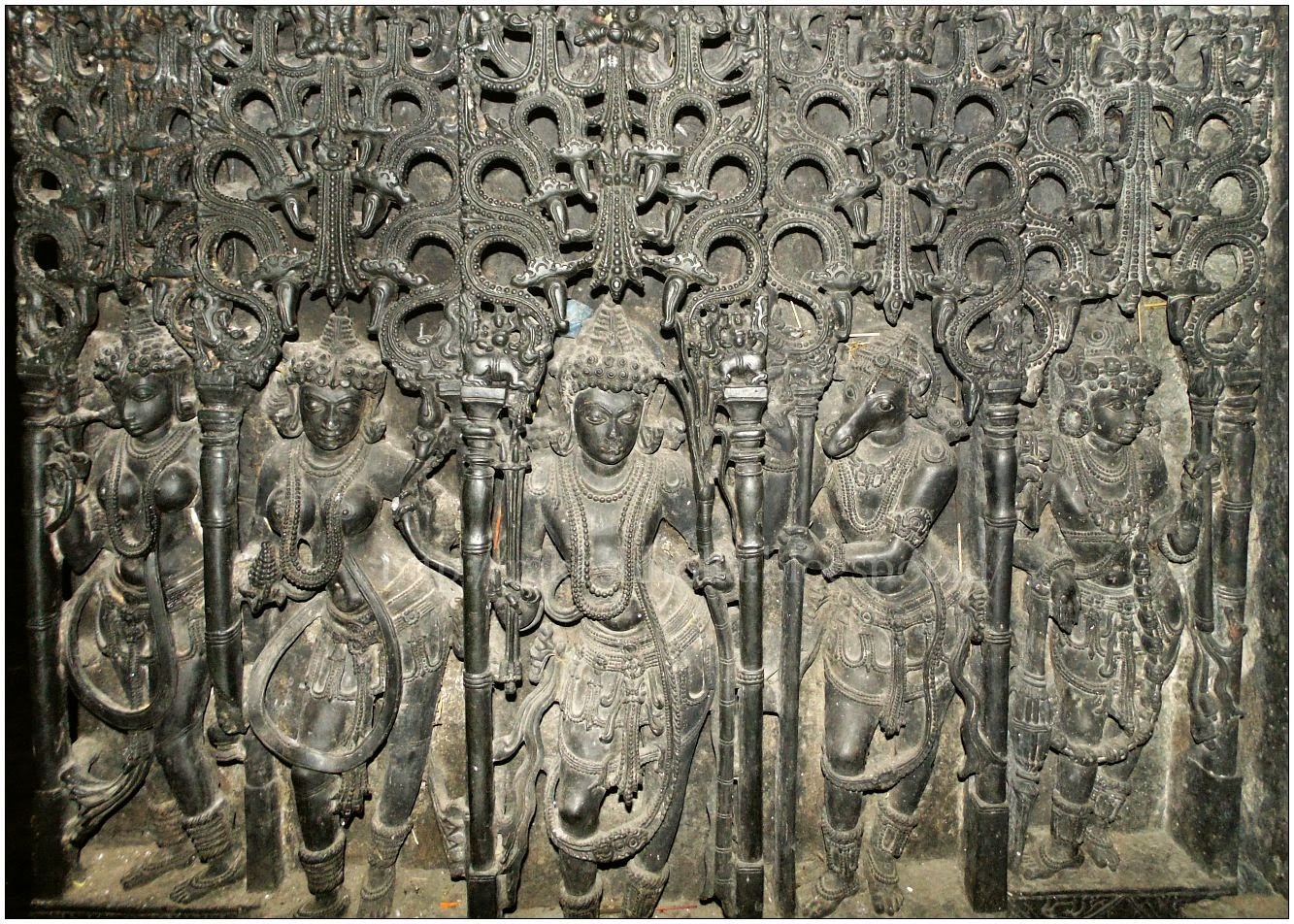 The lintel of the Sukanasi entrance has a highly embellished Makaratorana mounted on two round pillars. There are three niches in the center of the lintel in which an image of Sira is kept in the centre flanked by Vishnu and Brahma on either side. 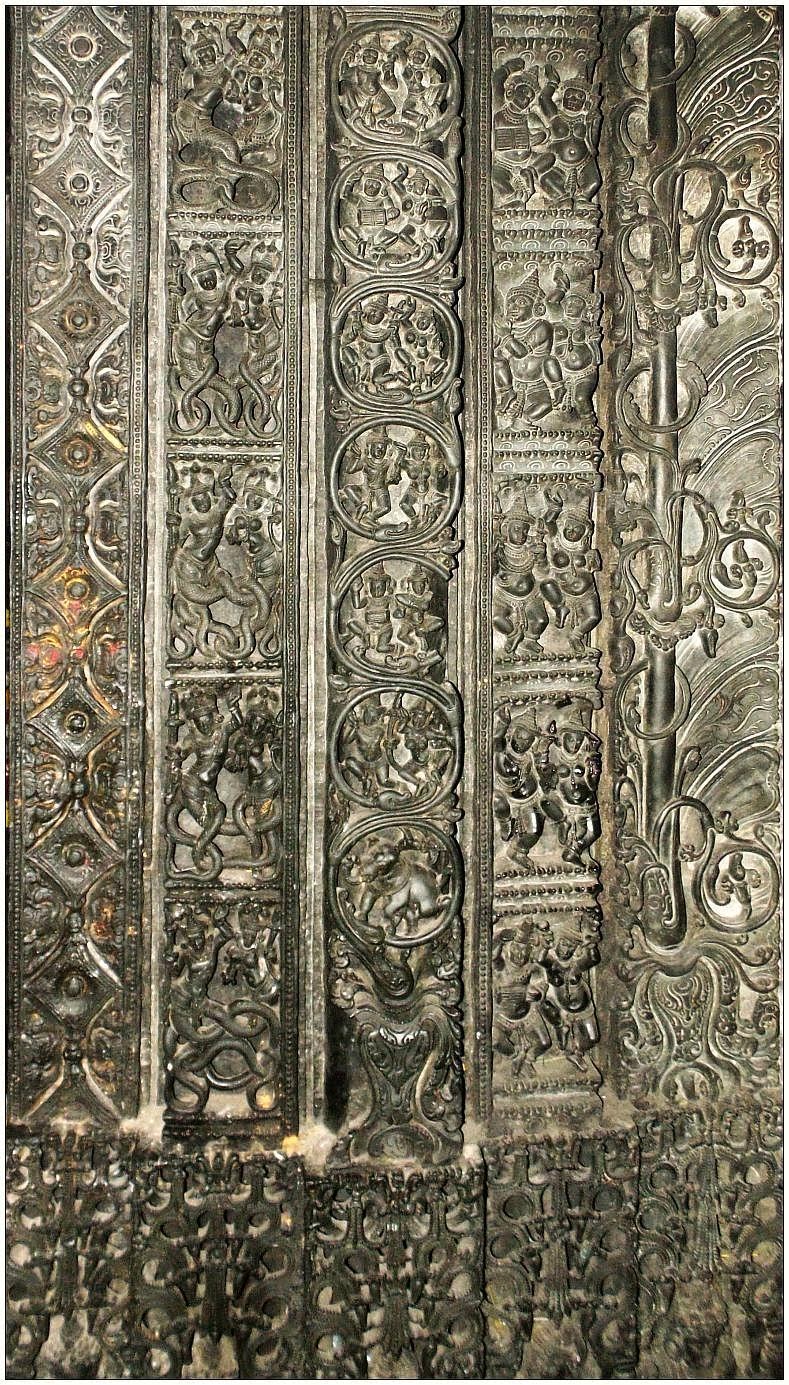 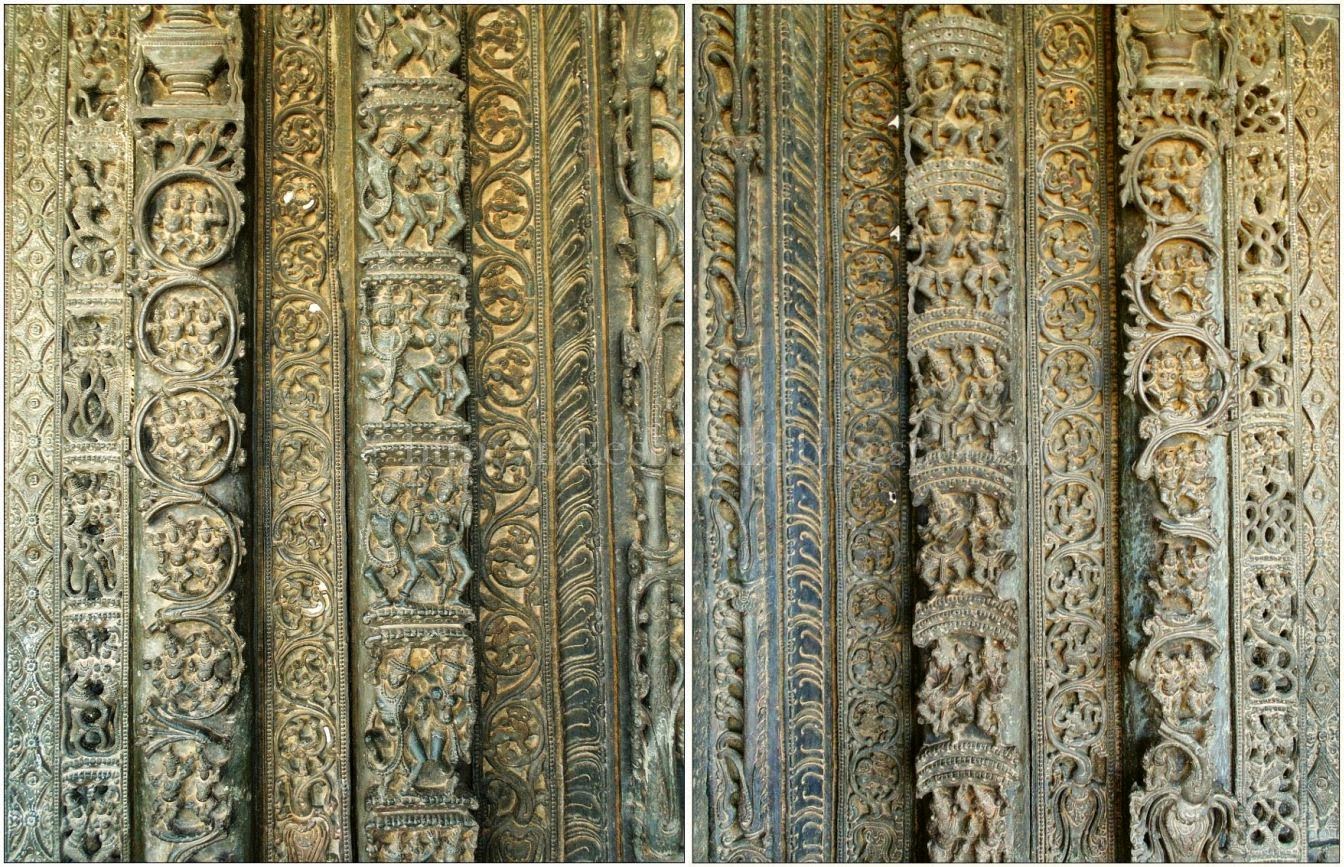 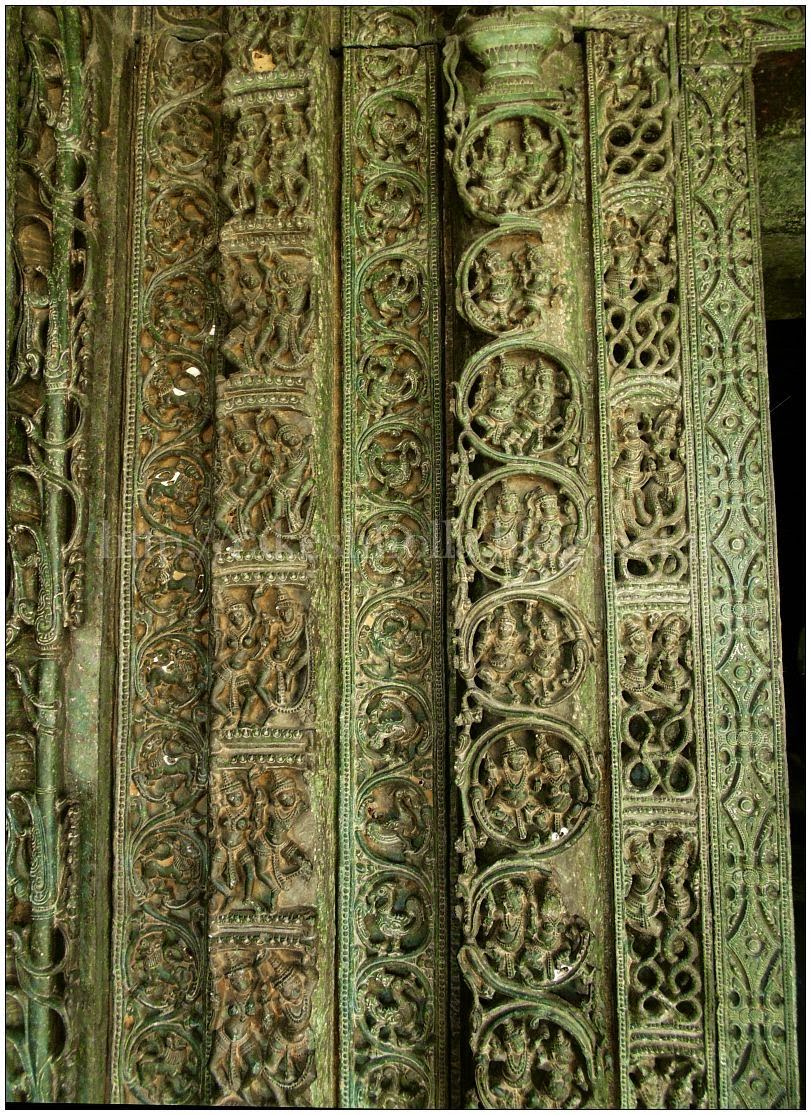 The outer walls of the Garbhagriha have niches decorated by pilasters and miniature Sikharas.The niches have image of gods flanked by Madanika images mounted on Dwarps. The walls which have those elegantly executed art objects are considered to be an excellent example of Chalukya style of Architecture. On plan, the temple consists of a Garbhagriha an Antarala,a Sabhamandapa, two Mukhamandapas on either side, and a detached Nandimantapa in the east. 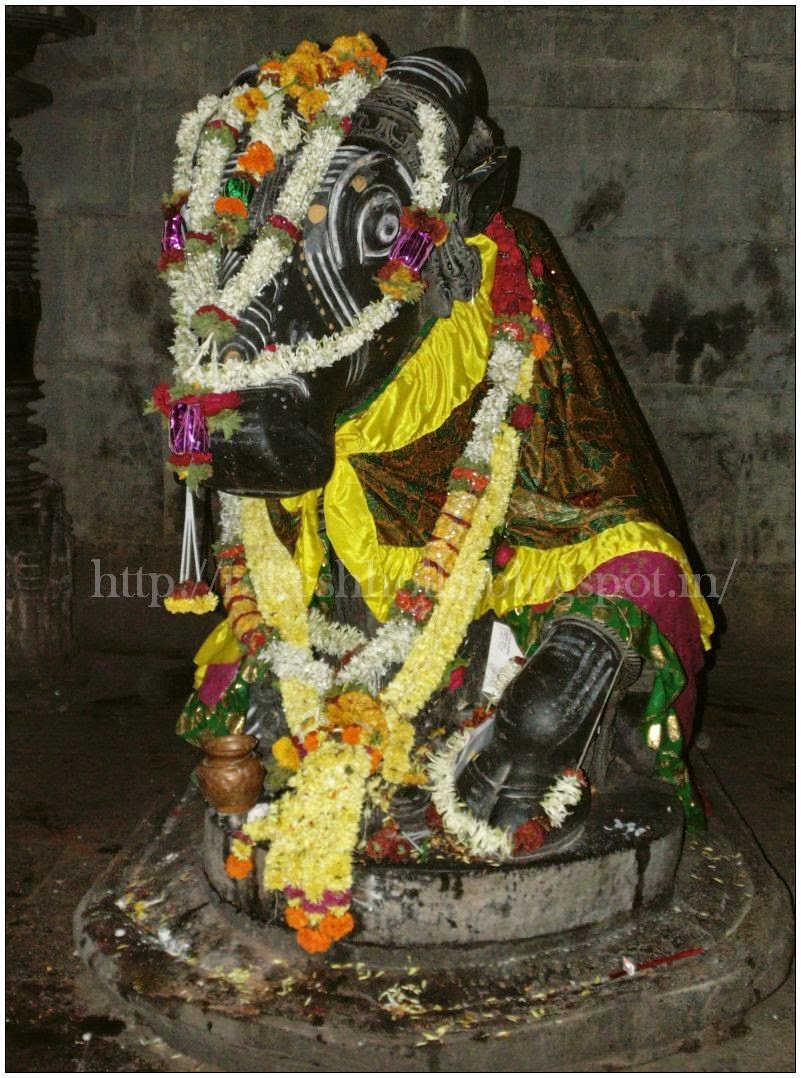 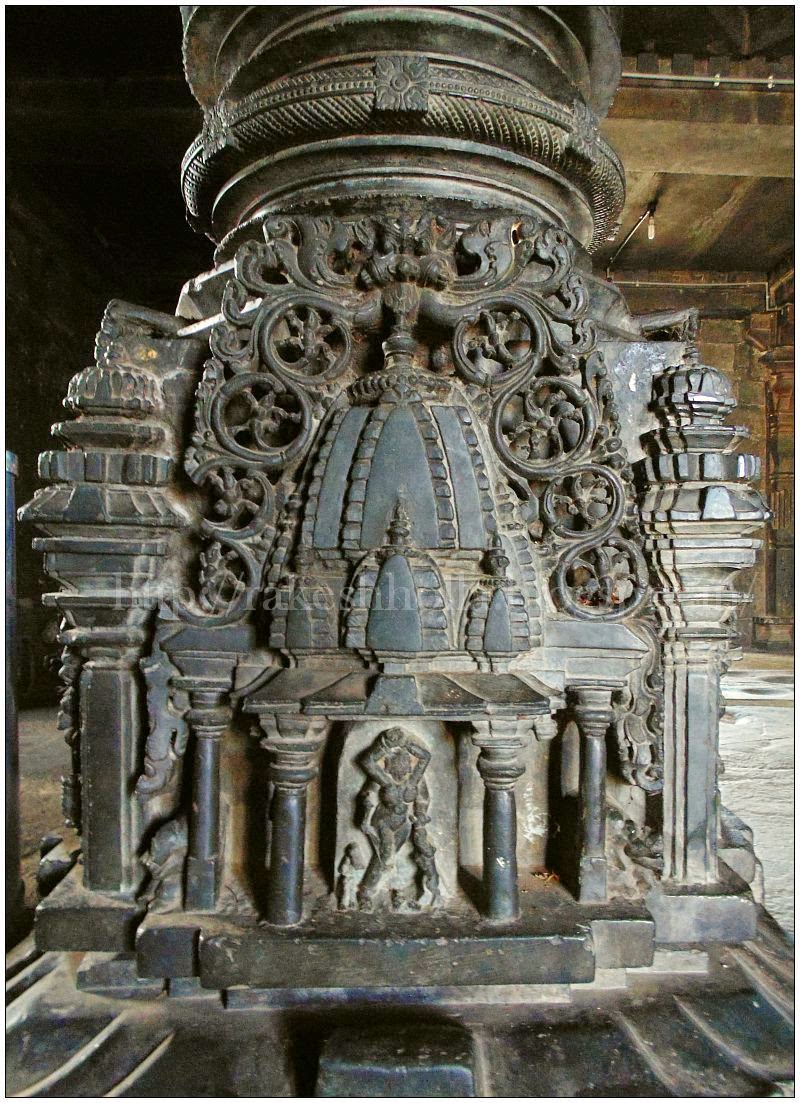 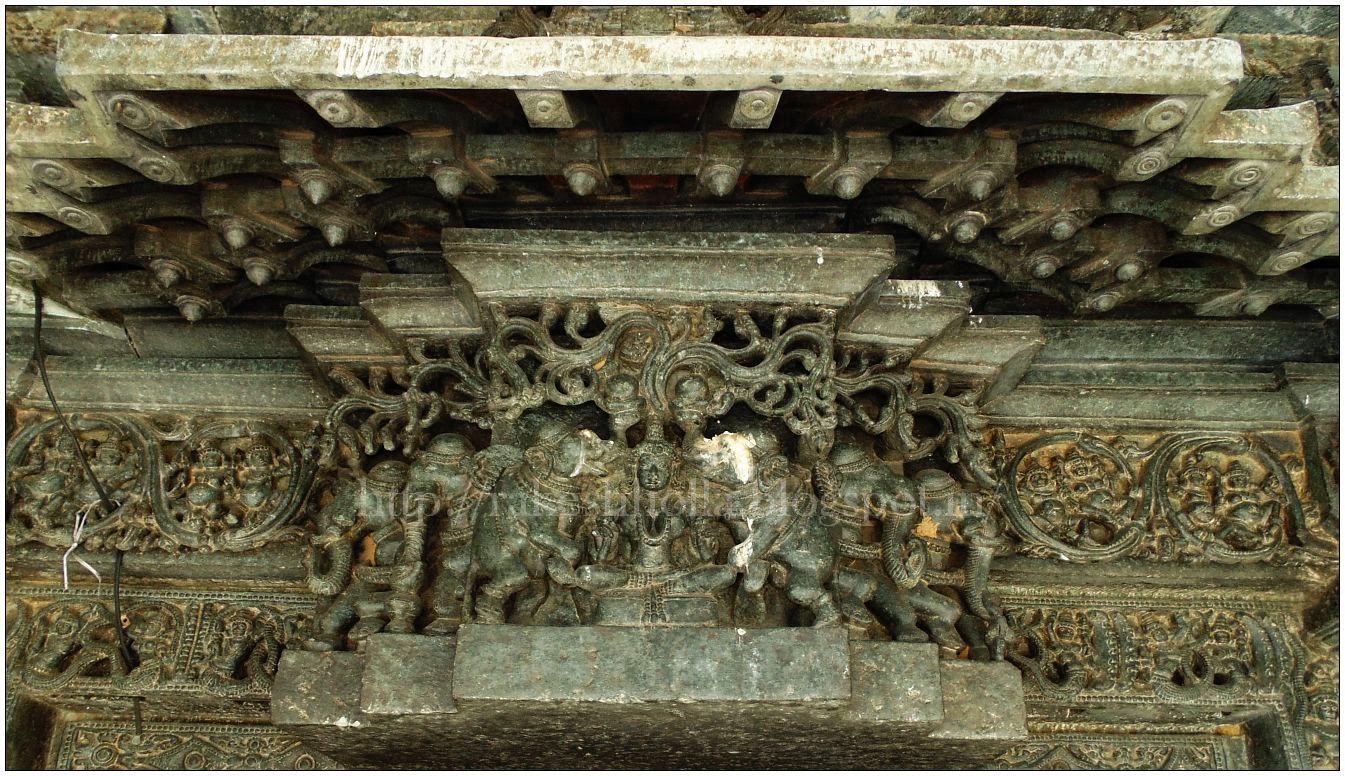 When the region came under the Hoysalas, Kuruvatti became an important center as their kings, Lokabharana, made this village his abode. Many inscriptions of the Hoysala period mentions Lokabharana as the Rajguru of the Hoysala king Ballala II. The chief queen of Ballala II, Padumaladevi, also made a grant at Kuruvatti to god Ahavamalleshvara. The village would have acquired quite a reputation during that period that it has been referred as Dakshina-Varanasi in one of the inscription. 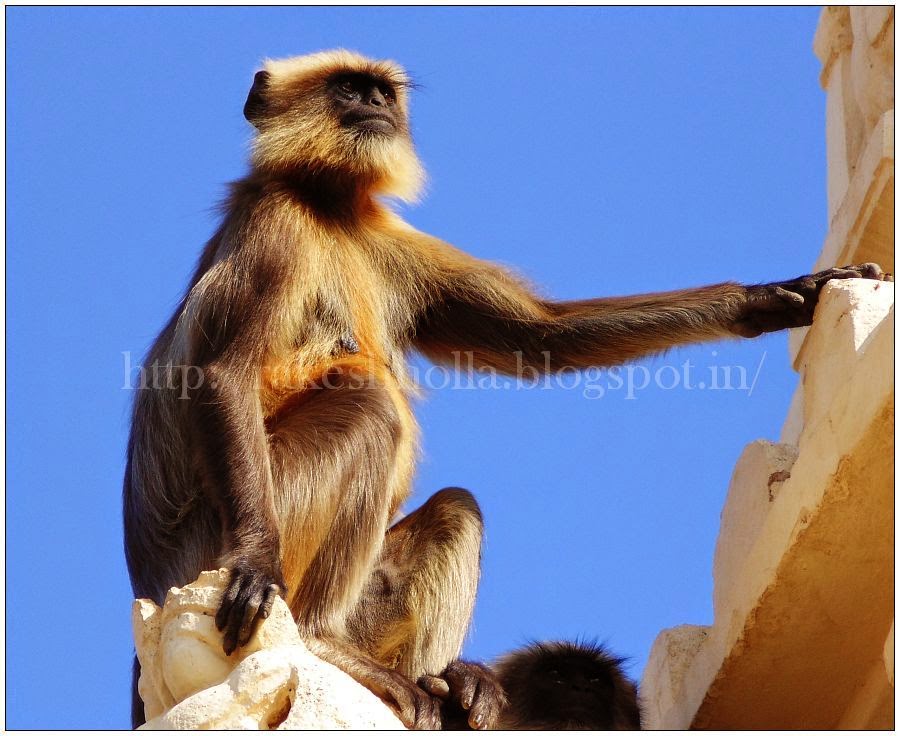