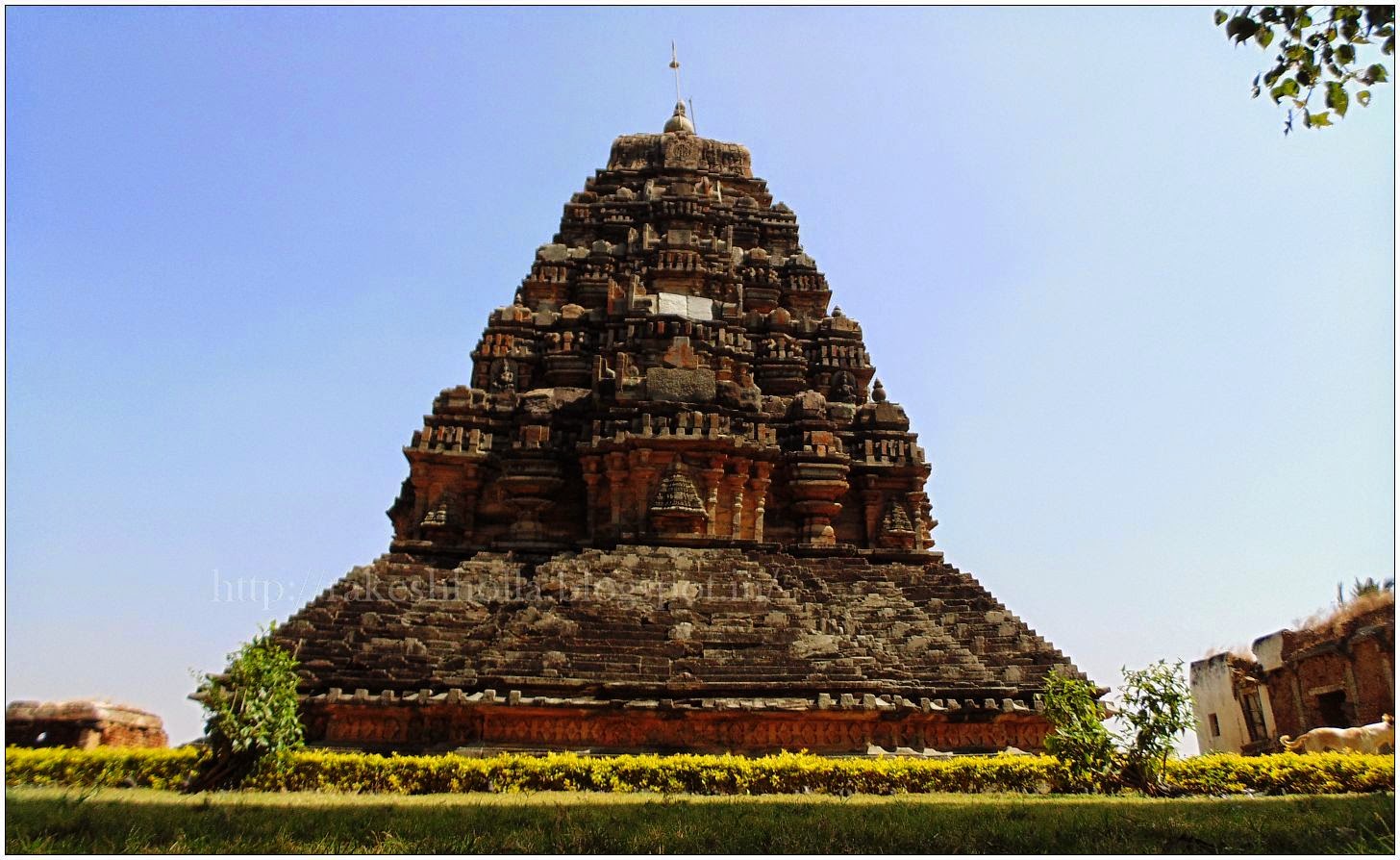 Temples were the hub of activity not only for worship and ritual, but also for display of tangible and intangible arts. Dance, vocal and instrumental music, architecture, sculpture and literature overflowed on an unprecedented scale. Classical arts percolated into deep rural environs via temple medium. No wonder the period saw great homogenization of attitudes and culture components. Galageswara temple at Galaganatha in Haveri District presents the most unusual pictures of local flavour exposing to mainstream development and slowly dissolving into it. The east facing Galagesvara temple built on the banks of the River Tungabhadra during the beginning of the 10th century one of the innumerable temple built by the Kalyana Chalukyas. 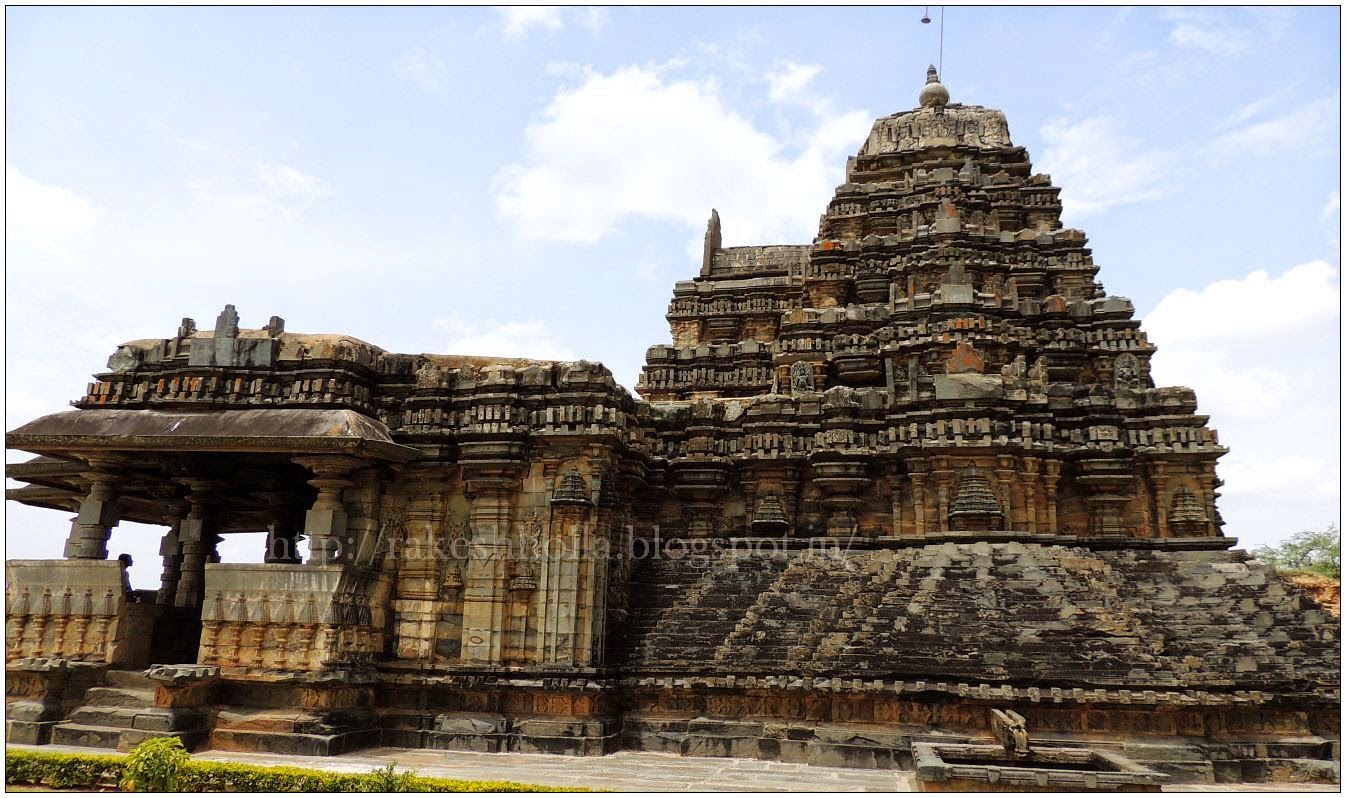 The Galagesvara temple is a large, rare, beautiful and magnificent temple with exquisite carvings and rich sculptural embellishments. Galaganatha about 30 km east of Haveri, was anciently known as Pulluni or Hulluni. It appears to have been a temple site at least as old as the 9th Century as demonstrated by an image of Vishnu of that date. A temple of Vishnu in the vicinity is evident also from a makara-torana panel which depicts seated Vishnu in meditation flanked by his spouses Shridevi and Bhudevi. There are ruins of two smaller pre-11th Century temples, probably originally of brick. 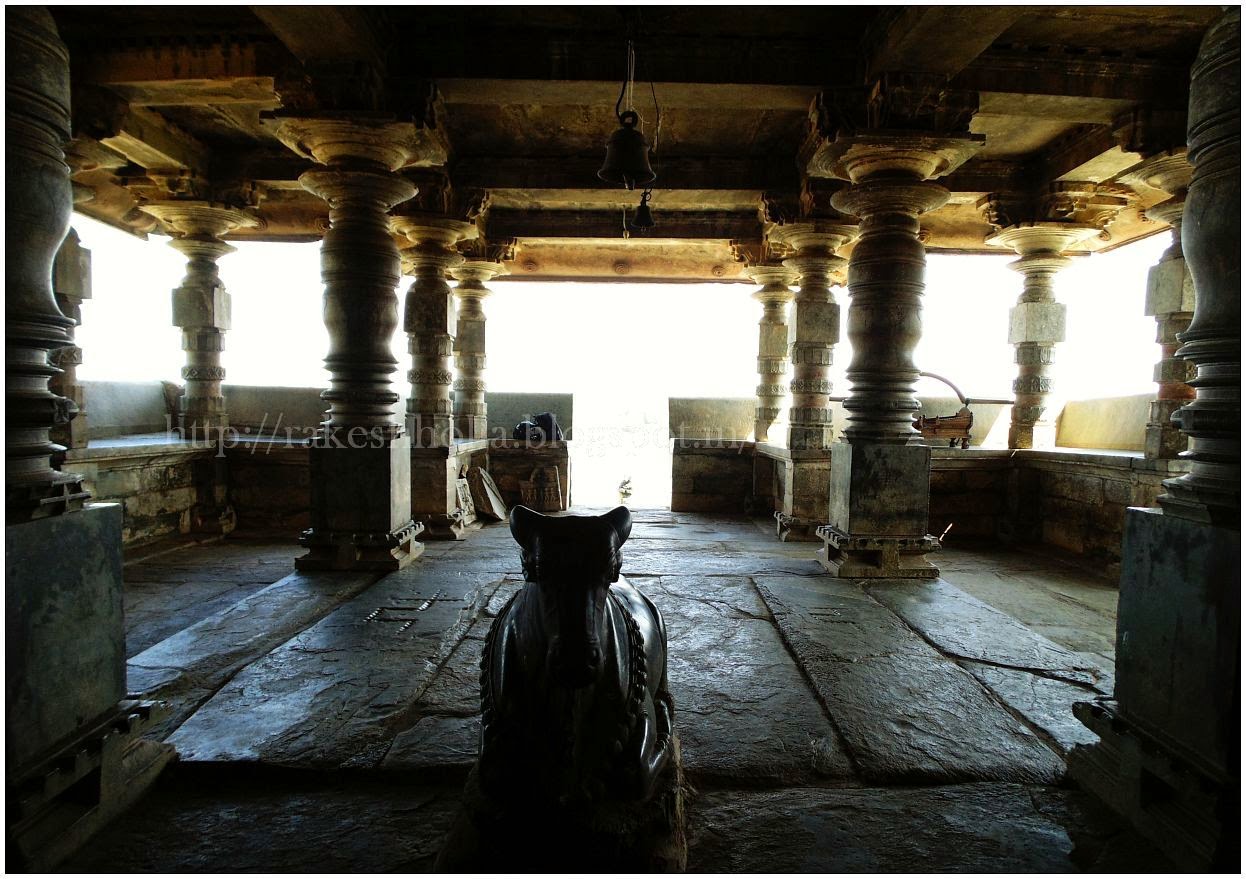 This large temple complex has on its plan, A Garbhagriha, Antarala and Navaranga. A Shiva Linga is installed on an elevated platform in the centre of Garbhagriha, the anterior wall of the Garbhagriha has a niche designed with a Sikhara and walls are relieved with decorative pilasters. On the interior of the sanctum is found with plain ceiling decorative pilasters. On the interior of the sanctum is found with a plain ceiling, Bhuvaneshvars. 12 feet high attractive door Jambs of the Garbhagriha has Trisakhas. The Lalatabimba has many individual sculptural representations. The water chute (Pranala) projects out on the left side of the sanctum. The spacious Antarala has attractive Trellis (Jalandharas) on eother side of the walls of Antarala are placed the sculptures of Sarasvati,Nandi, Panchlinga and Vishnu. The walls are decorated with decorative pilasters. The specious Navaranga can be approached through the entrances found on three sides.The 4 large Devakosthas found in the Navaranga. The large and high standing four pillars found in the centre of the Navaranga are attractive and a Nandhi is housed there. Navaranga has Kakshasana wherein short pillars and pilasters are seen on the left entrance of this Mandapa, two inscriptions of Kalyana Chalukya period are placed. 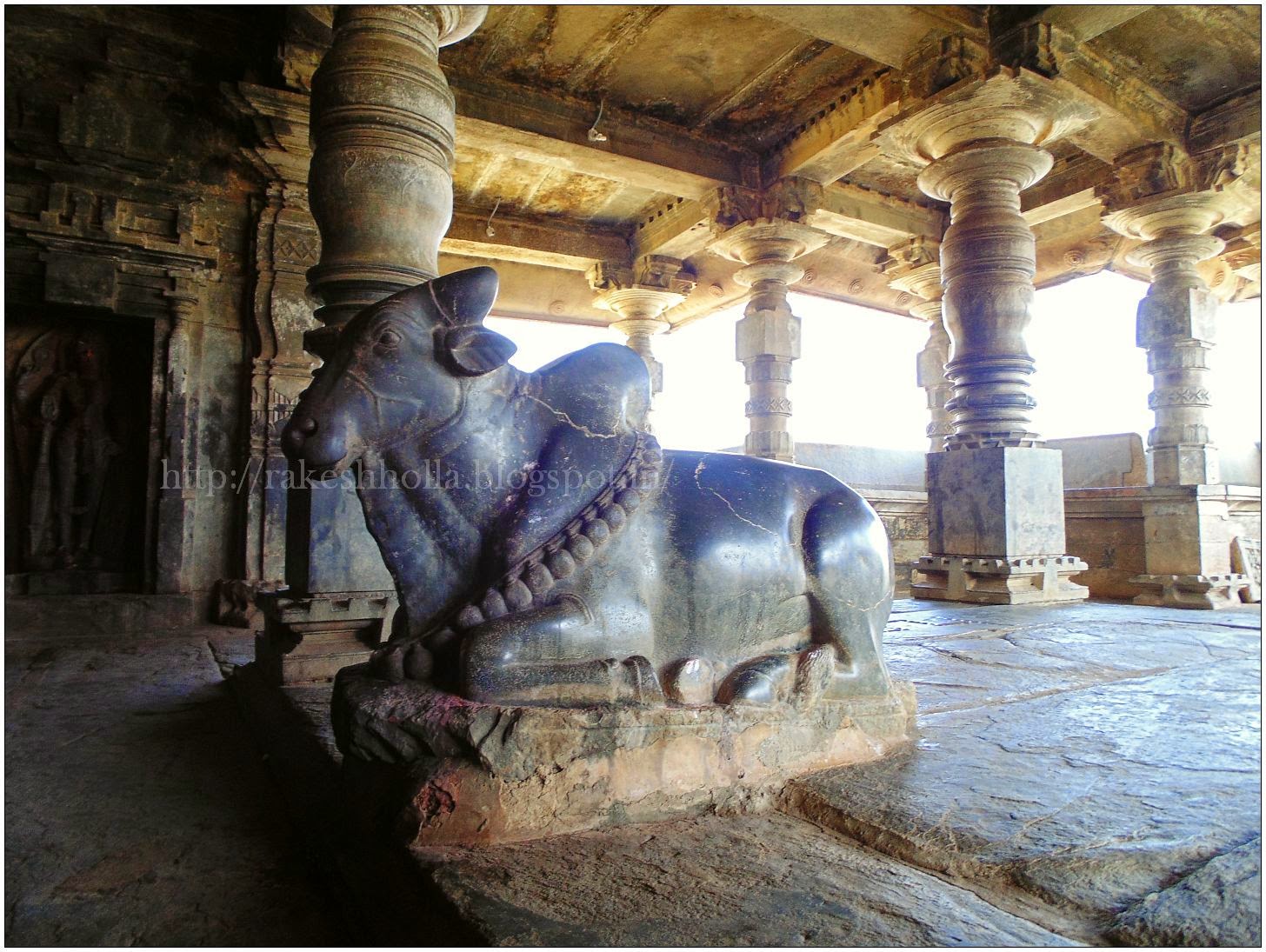 It is rather simple in plan, comprising a sanctum, a vestibule and a hall, the last component being provided with porches on three sides. It is the largest Vimana in the region, about 8.5 m wide. The sanctum enshrines a large linga of about 10th Century date, obviously reinstalled. From inscriptions in the vicinity, it would appear that the temple was conceived about the middle of the 11th Century. But it assumed the present form about 1079 CE, during the reign of Vikramaditya VI (1076-1126 CE), the greatest monarch of the dynasty of the Chalukyas of Kalyana. As a temple conforming to mainstream Kalyana Chalukya style, its uniqueness lies in an architectural adjunct necessitated by the instability of the structure.

The main shrine had to be externally supported by a heavy stepped pyramidal buttress around for fear of collapse of the shrine with its superstructure. This gives an odd look to the temple, but nevertheless makes it unique in Kalyana Chalukya series. The temple itself is simple in its décor, with one or two pieces of plastic art occupying the superstructure, like Vaishravana, reliefs of Shiva, Vishnu, Surya and Brahma on its cupola, but good number of stone images meant as principal or secondary deities are stored in the temple that entail comments. They are obviously from the vicinity. 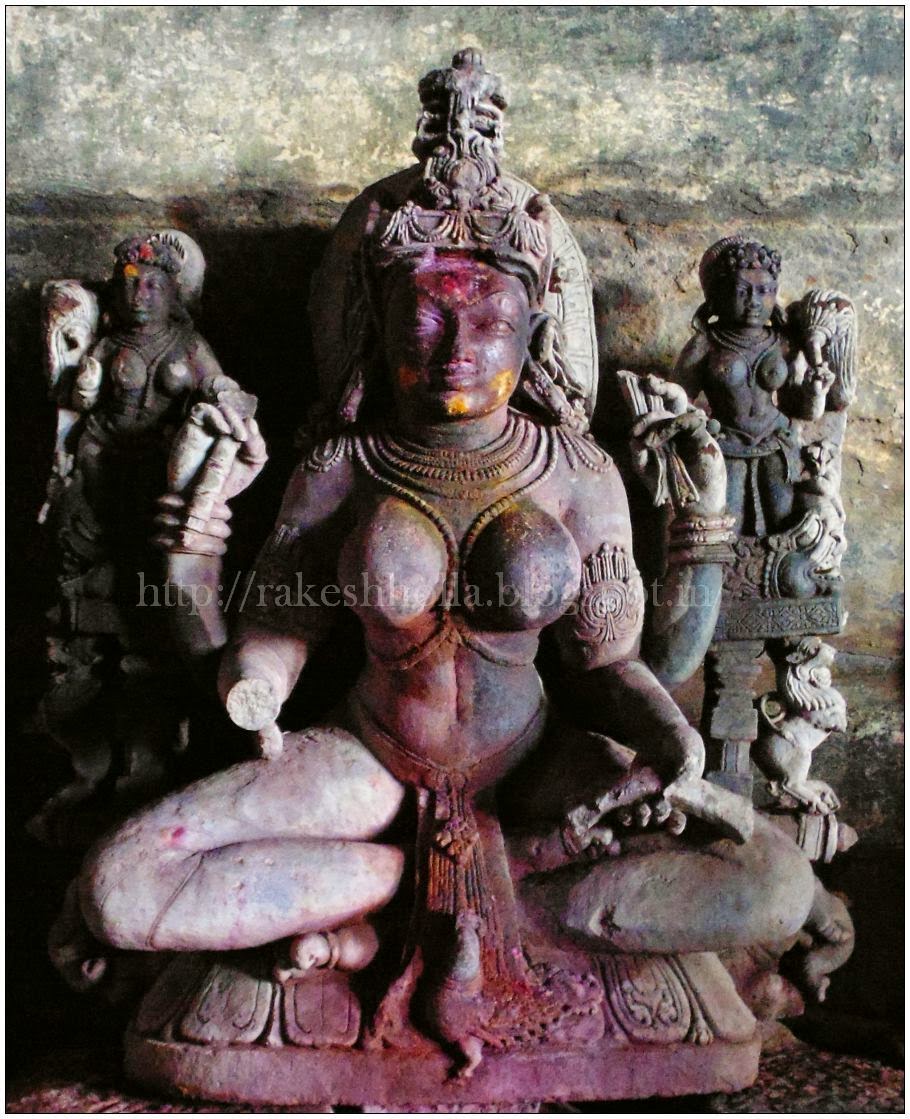 The present form of the temple owed to the skill of two principal architect-artisans Bankoja and Ketoja. It is the loose sculptures stored in the temple which draw attention of art connoisseurs. They reveal how a local style of plastic art was active at the place. Many of these are images of deities, which comprise among others, a small Vishnu in round; some of the individually carved Saptmatrikas (Seven divine mothers) including Brahmi, Indrani, Varahi and Maheswari, which are otherwise usually found as a set carved in a single stone panel; as also Saraswati, Bhairava and Bhairavi (10th Century). 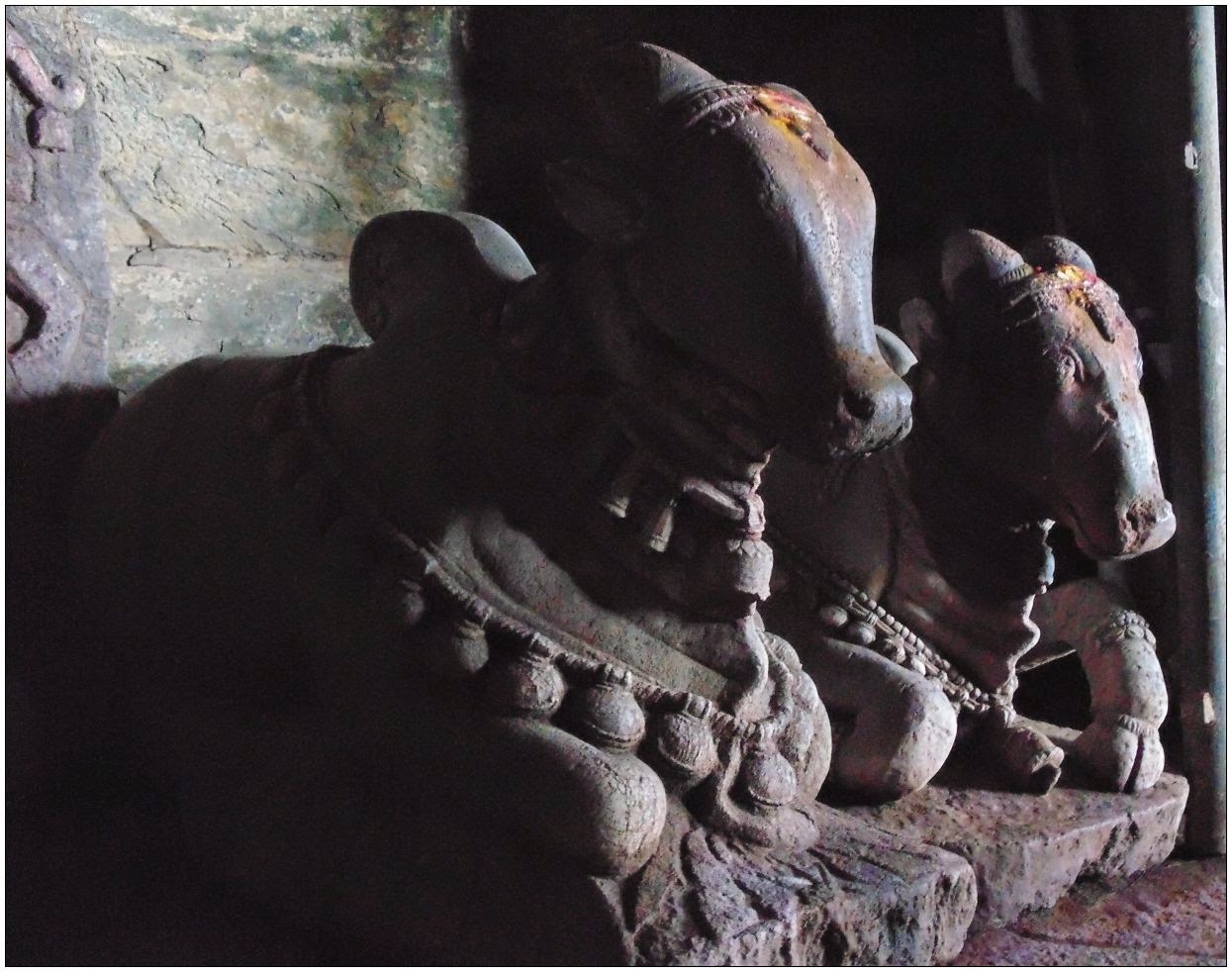 The image of the curly haired young seated four-armed nude Bhairava is mutilated but executed in round. Raised eye-brows, rolling eyes, tusks, skull-garland, beaded necklace, snake armlets are all executed boldly. The gentle smile is in fact fearsome with curly matted hair disheveled. A surviving hand holds a skull-bowl, Bhairava's typical attribute. Coeval to Bhairava, there is an image of his female counterpart; eight-armed Bhairavi It is obviously carved by a different sculptor. Compared with the upper part, the lower part of the body of the goddess looks somewhat disproportionate, but this may be deliberate, perhaps to add to the fiery form. The face has a terrific smile with prominent tusks, rolling eyes and bow-like eyebrows. A peculiar sword, snake, thunderbolt, trident, khatvanga, kettle drum, hide and skull-bowl in her hands enhance the terrific appearance. 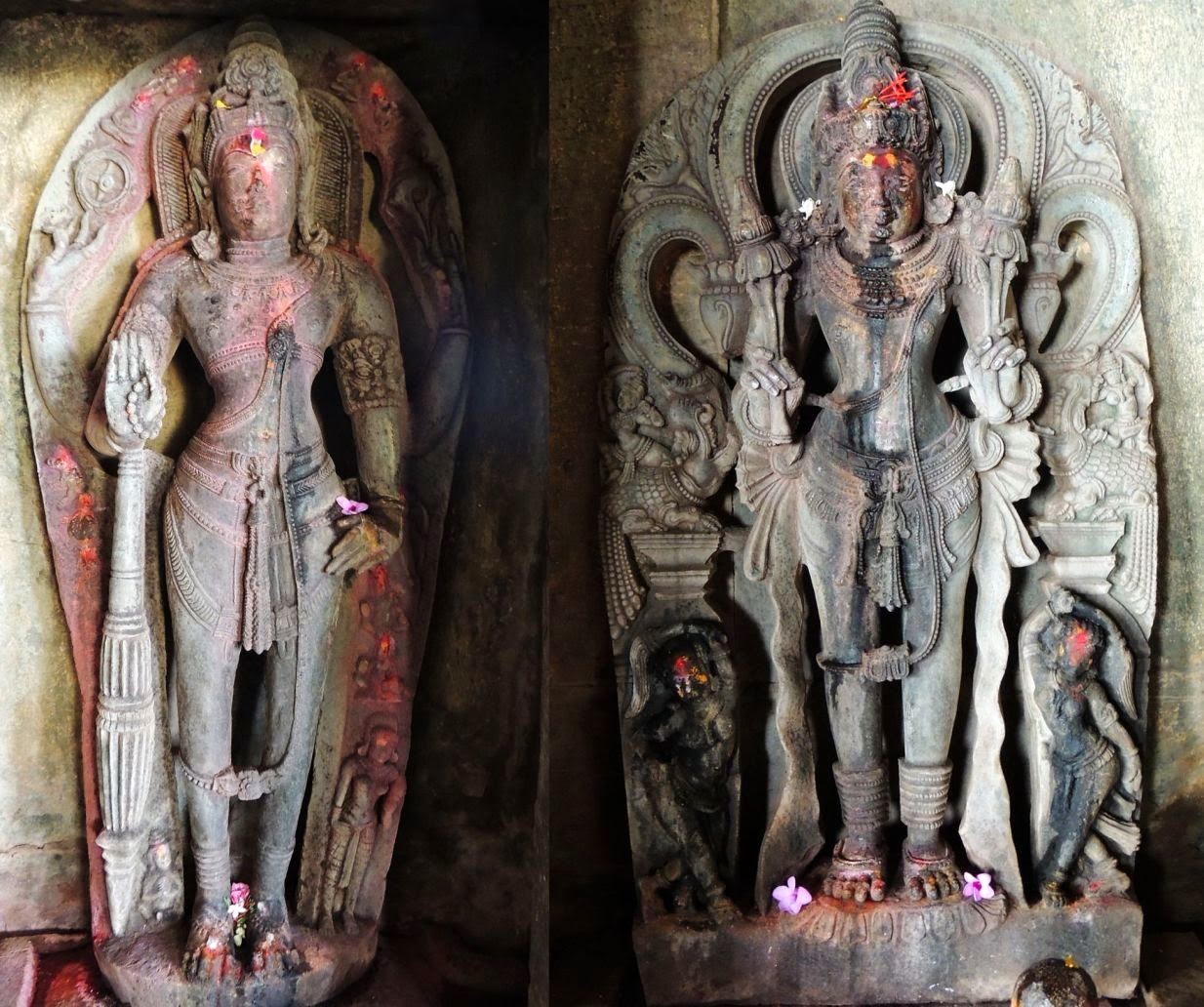 Meant for consecration in a sanctum, it is a noteworthy piece of art on account of its iconography, style and antiquity. Round faced and chubby cheeked, fishy eyed, small lipped with subdued smile, this four-armed deity in round is fleshy. The upper hands grip a diascuss and conch between the thumb and forefinger realistically. The lower right hand holds a bahubija-phala (multiple seeded fruit) and the lower left rests on hip. The ornaments are sparse and beaded but boldly executed. The waist garment almost reaches the ankles and is tied in front in a manner done in Pallava Vishnu images. Likewise, noteworthy is the treatment of the rear of the headgear which is adorned by an exquisitely carved lotus. These are features that count in early Vishnu specimens of Karnataka. There is no means of assigning it an accurate date except on stylistic affinity. A date in the 9th Century should be appropriate. 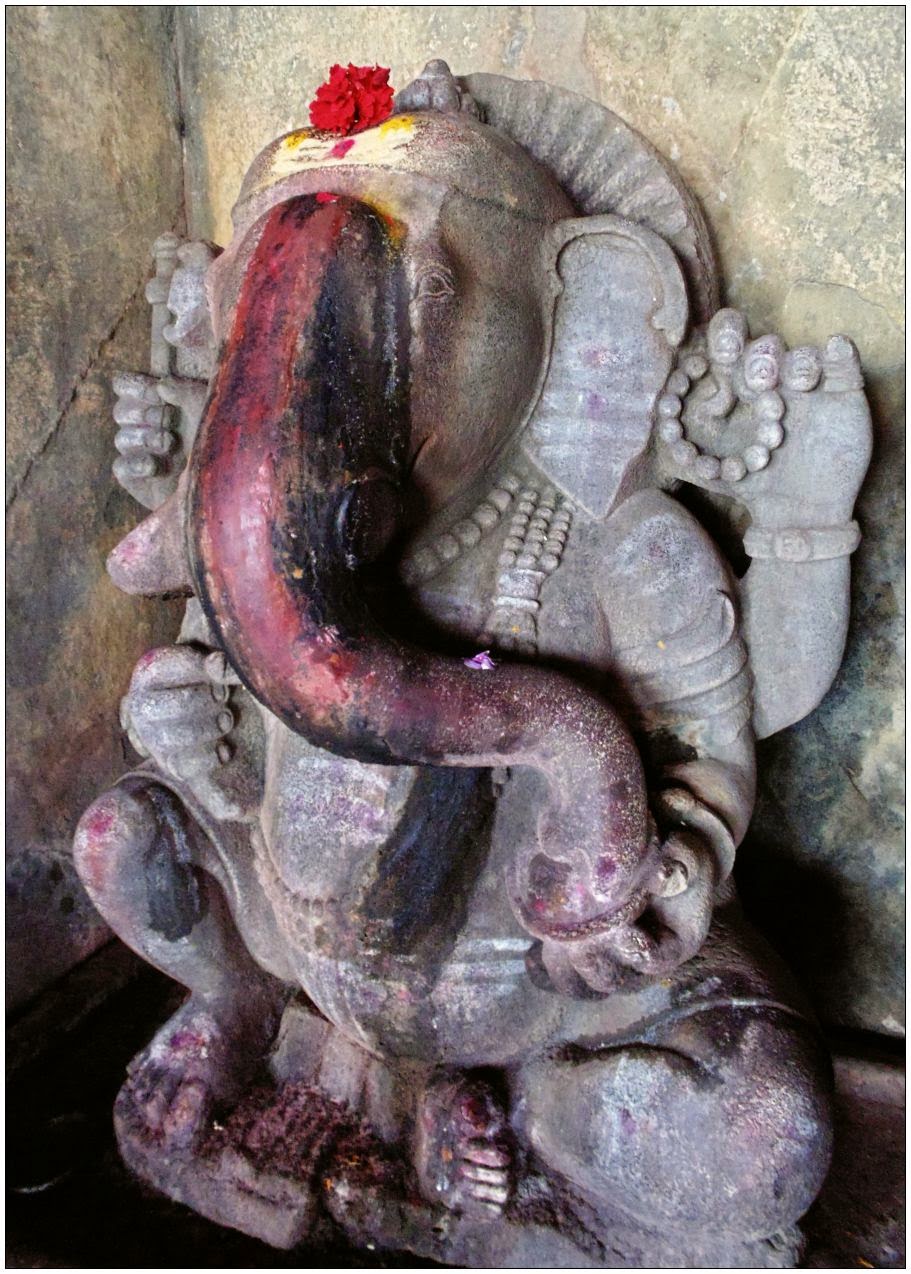 An image of Vishnu dated 1034 century occupies one of the niches in the hall. Its sponsor was Nakimayya. It is treated as a stele in which the god stands equipoised. Of his four hands the upper hands carry the discus and the conch balanced between the forefinger and the mid-finger. The lower right hand is placed on a mace in the boon-conferring gesture but holds a rosary too, most unusual for Vishnu. The lower left hand is akimbo. Stiff modelling of the body is equivalent to its date. Its restrained embellishment anticipates the later Chalukyan. 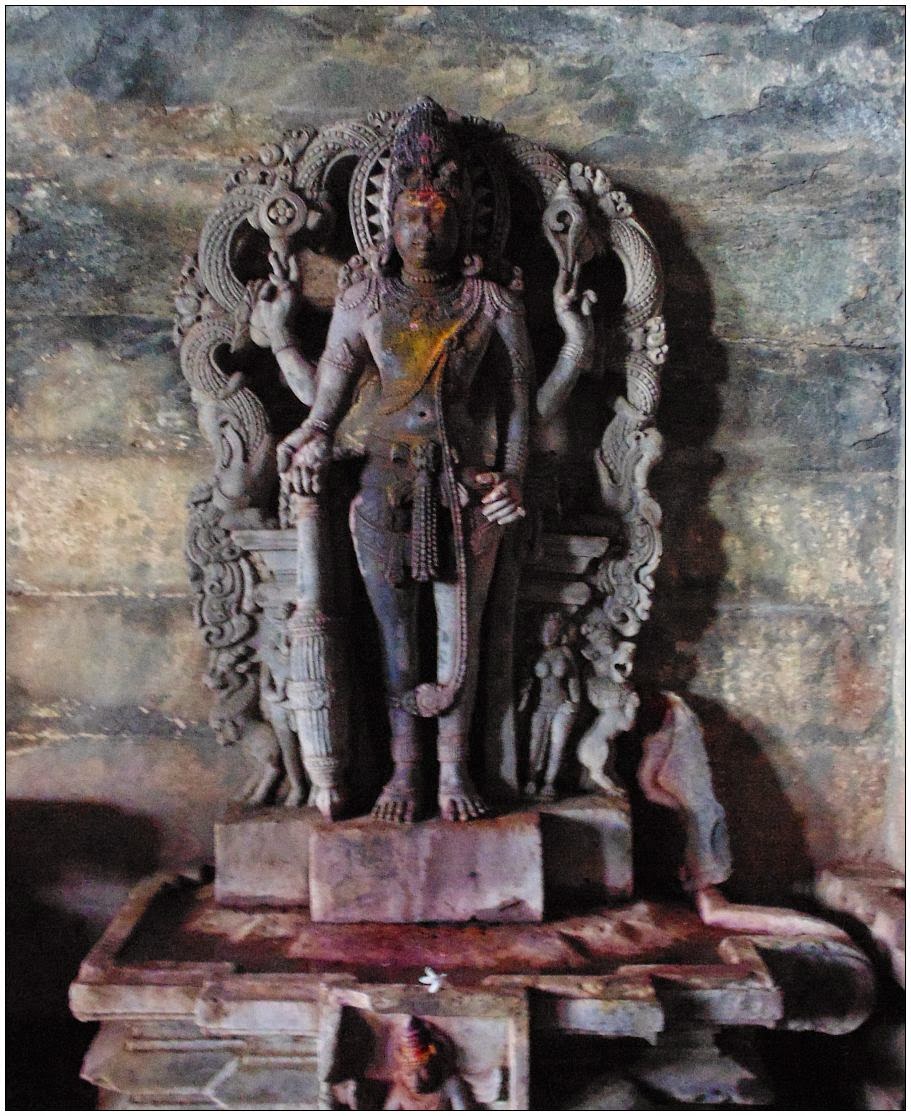 Mahishamardini called Durgabhagavati in contemporary records is another piece of art, most charmingly treated. It occupies one of the niches in the hall of the temple and was sponsored by a Haihaya chief named Gandaraditya, who claimed descent from the legendary Sahasrarjuna of Mahishmati, the original home of the Haihayas. The stele represents the moment of destruction of the buffalo demon by Durga, the eight armed goddess who wields varieties of weapons: sword, trident, discus, arrow, conch, bow and hide. The quivers behind her shoulders suggest her savyasachi abilities. Having completed her deed, she stands majestically with slightly raised head. Rather moderately decorated, the godess' plastic treatment of undulations of female form, waist garment and embellishment, all indicate the hand of master sculptor. It is a subsidiary image and the plain space around the goddess has been utilized for inscribing the eulogy of its sponsor, Gandaraditya. The image should be coeval to the Vishnu image of 1034 CE, though the hands that modeled it must be different. 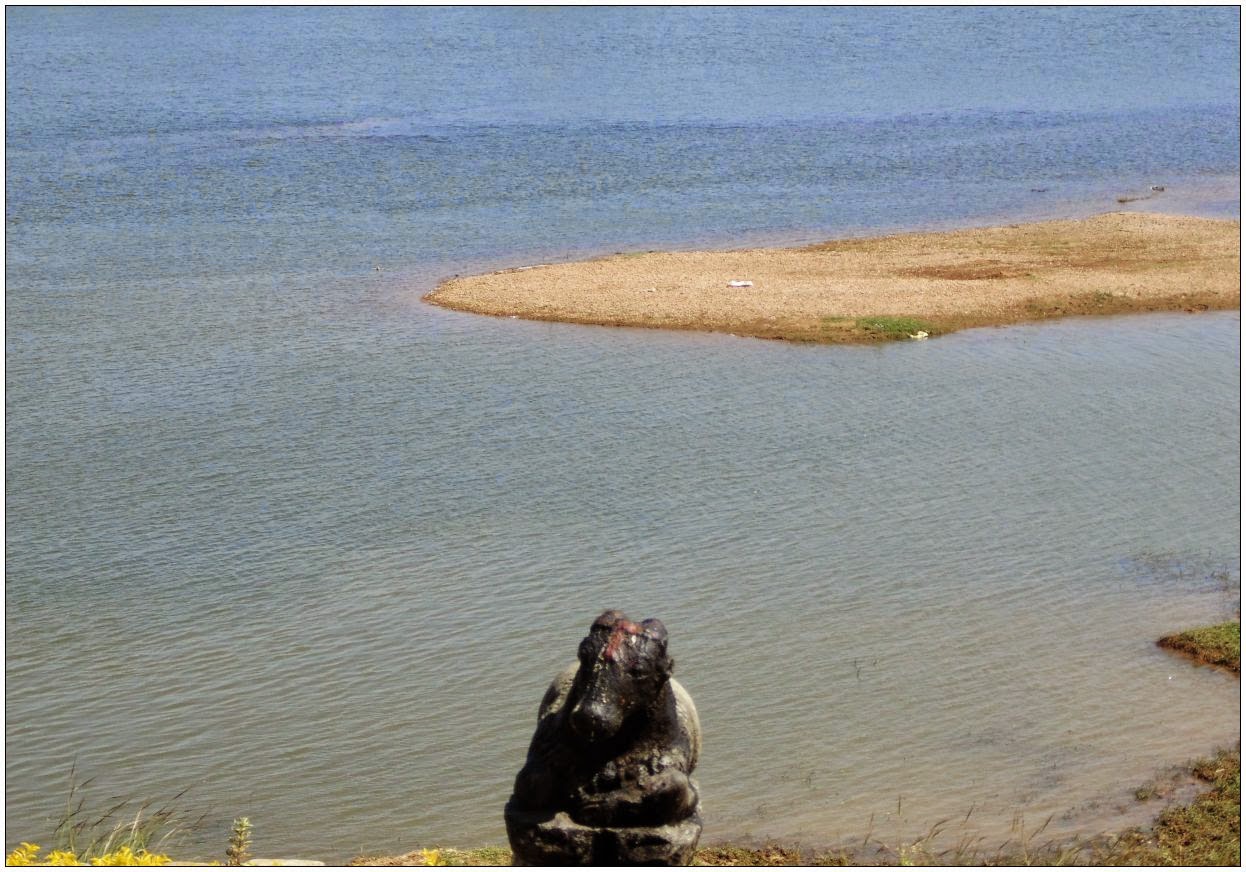 The most outstanding piece of art at the place is the image of goddess of learning, Saraswati. Seated in half-lotus posture (ardha-padmasana) on an inverted lotus seat, the four-armed goddess is fleshy, with a strait gait and gentle smile, fishy eyes that beam innocence, and a curious hairdo. The attributes in three of the hands are damaged, but the one in the fourth a book is well preserved. Iconographically, the remaining hands, if not mutilated, would have carried a rosary, a goad and a noose. Her vehicle swan is carved on the seat. But what makes this the sculpture unique is the back rest in the form of a frame supported on its flanks by an elephant below, succeeded by a rampant lion above. There are makaras that hide the lower part of the two charming lady chauri-bearers attending on the goddess. This kind of detail is unique and is often associated with seated Jaina tirthankaras, where male chauri-bearers replace the lady chauri-bearers. The piece cannot be later than mid 11th Century and beams the work of a master sculptor of a distinct local stream. 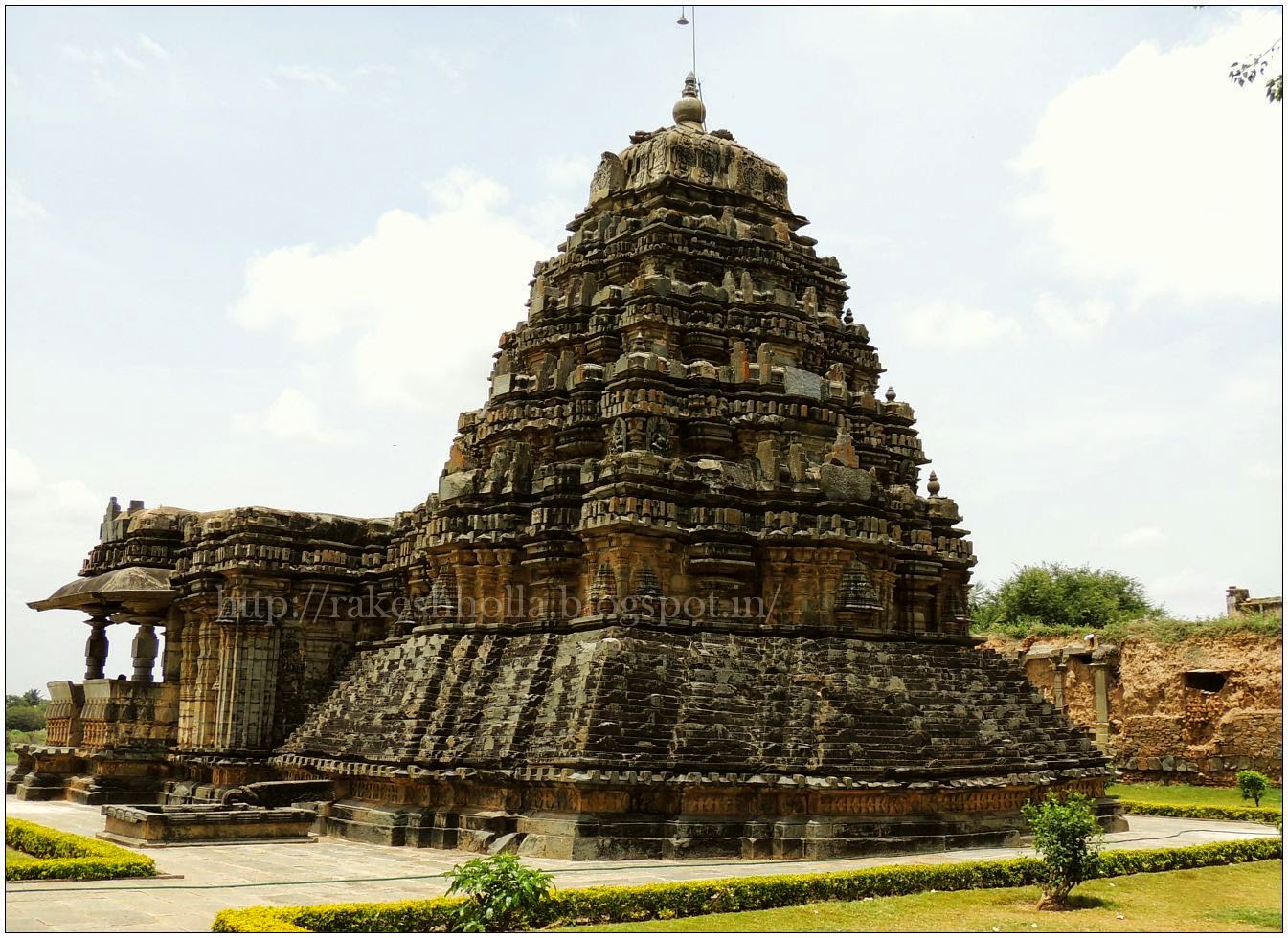 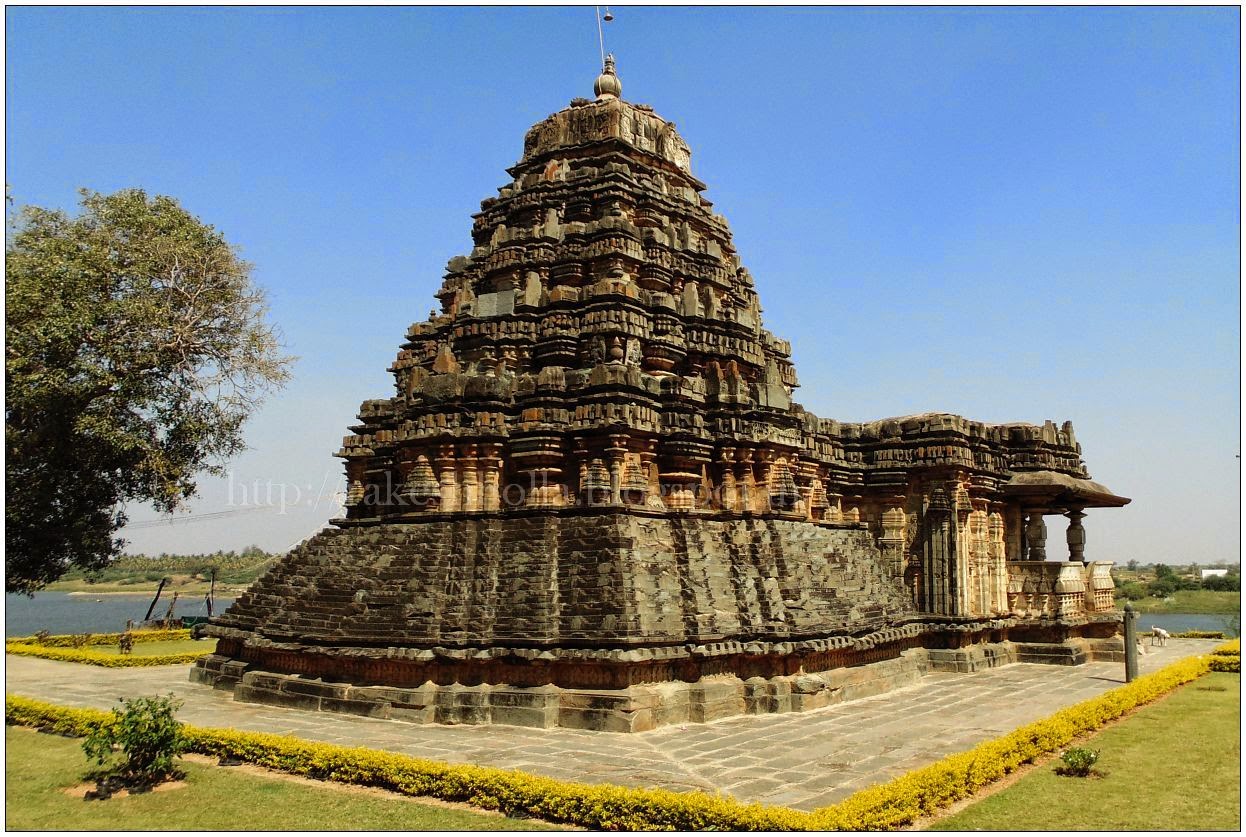 The icon of Surya the sun-god is more in conformity with the mainstream style, but with certain unusual features. The mainstream style is betrayed both in ornamentation and the triple-loop beaded Makara torana background. The two-armed god, holding lotuses in hands, stands in equipoise. The beaded multiple ringed anklets seem to derive from an earlier tradition. The florid tails of the Makaras flow down from the Torana pillars and against the pillars stand cross-legged ladies actively swaying flywhisks. This is unusual. For the chauri-bearers normally are shown with flywhisk held resting on shoulder. Possibly it is coeval to the date of the hall which was completed in 1079 CE. 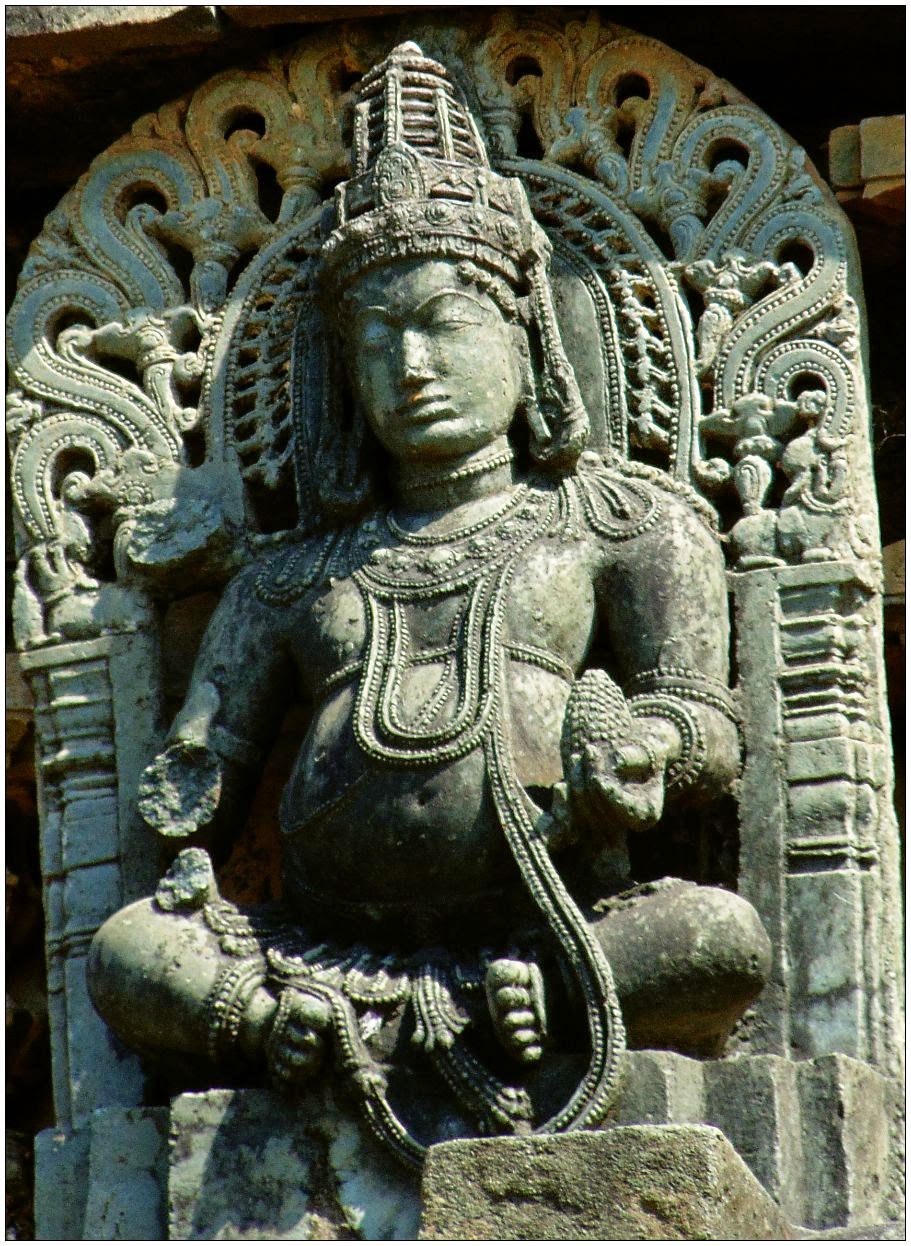 Another exquisitely carved Vishnu image that distinguishes itself in the series is also found in the temple. Four-armed, with mace, discus, conch as attributes in three hands and the fourth placed near the hip, the image is interesting because in the right lower hand it carries the bahubija-phala, an attribute of early Vishnu images in Karnataka during the Badami Chalukya period (6th-8th Century CE), but usually dispensed with later during the Chalukyas of Kalyana and Hoysalas, when the chaturvimshati-murtis (twenty-four forms of Vishnu, with the attributes of lotus, discus, conch and mace) became the most favoured. In the present image, the mace is rather bulky and heavy, and corresponds to an earlier tradition. The scheme of ornamentation of god's persona is in mainstream style, but the beaded twisted five-looped makara-torana background is curiously and distinctly treated. The makara tails (mythical crocodile like animal) not only flow down from the pillar top, but rest on heads of rampant lions. The torana pillars are obscured by standing Garuda, the vehicle of Vishnu on right and a spouse of Vishnu, probably Bhudevi (earth goddess) in double-bend posture. This also is unusual, as normally both the spouses of Vishnu, Shridevi and Bhudevi, flank him in contemporary sculpture. 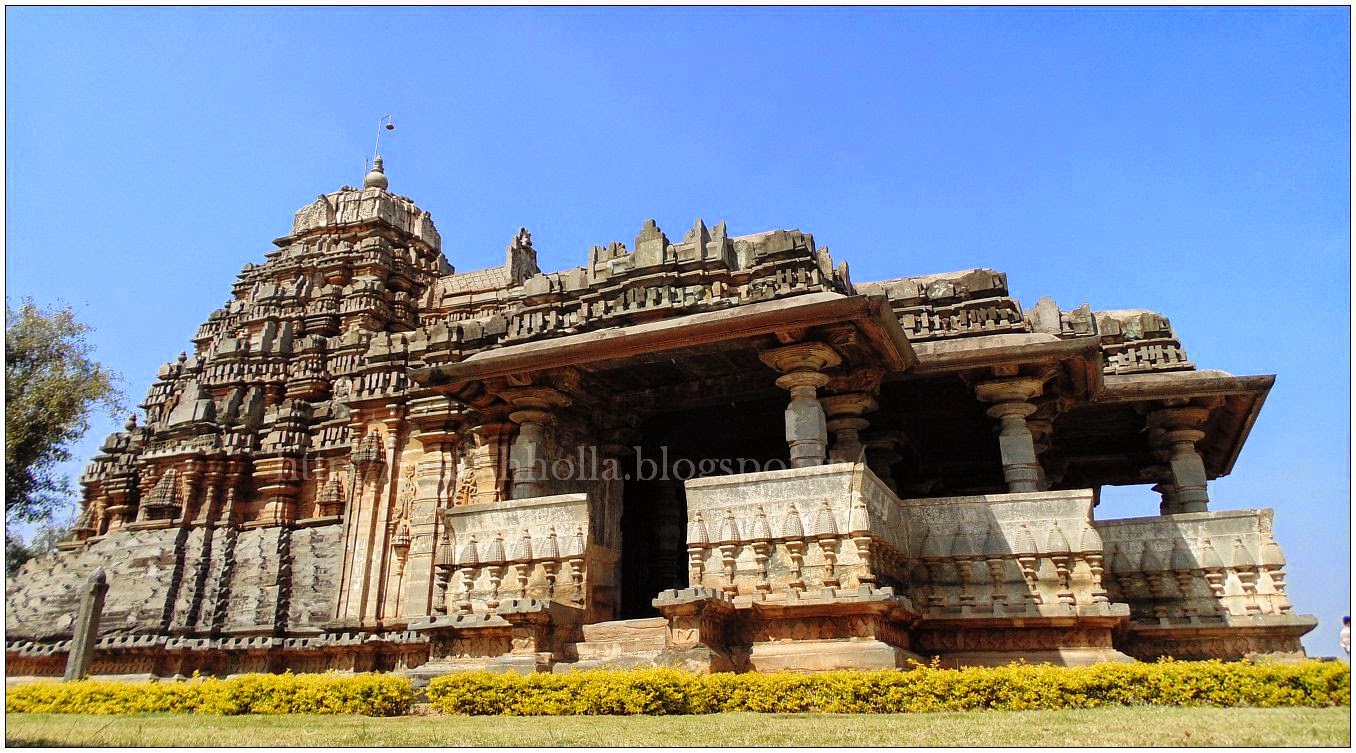 Mostly likely the artist derived inspiration from the Saraswati of the earlier date mentioned earlier, or belonged to that school. The sculpture should date from 1079 CE. Vishravana  the pot-bellied god of prosperity, carved on the superstructure of the Galageswara temple is a classic example of the flowered mainstream style of the Chalukyas of Kalyana. In point of time it cannot be earlier than last quarter of 11th Century. The treatment of the plastic form, the face, the beaded ornaments all underline a static monotony of style towards which the mainstream was crawling, finally crystallizing in Hoysala idiom. The sculptures at Galaganatha thus display the presence of a powerful local style with iconographic and stylistic individuality, which in the course of time came under the spell of the mainstream style but retained its distinctness far more than anywhere else. The next time you are in Karnataka, do spare time to visit this curious temple and enjoy its charming sculptures. 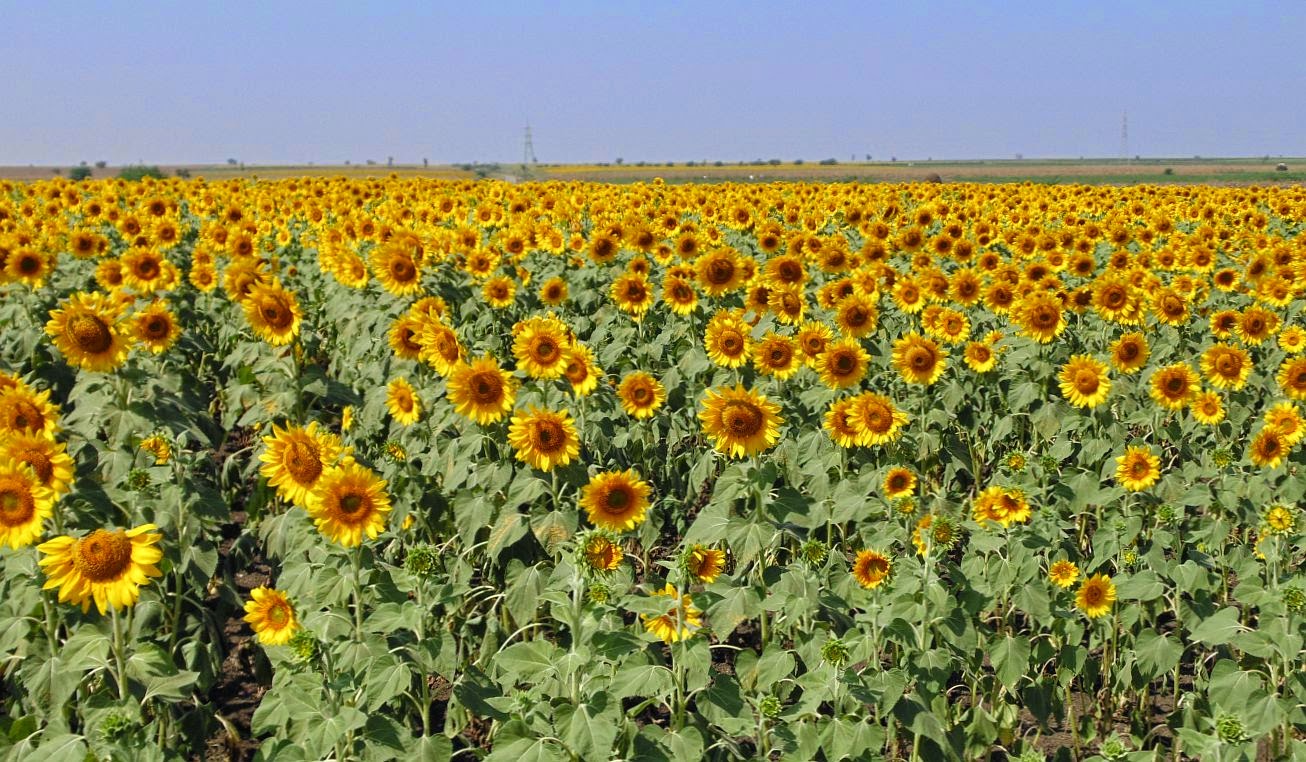 In order to protect the temple from floods an elevated Adhisthana is built. The stellar planned Adisthana resembles that of a Pyramid, with a broad base and tapers as it rises upwards. The Adhisthana with stepped descending steps tapers above from the base on which the wall portion is built. The Adhisthana has Jagati,Kapota and Kumuda with many sculptural carvings. The tall Sikhara has Sukhanasi and Stupi. 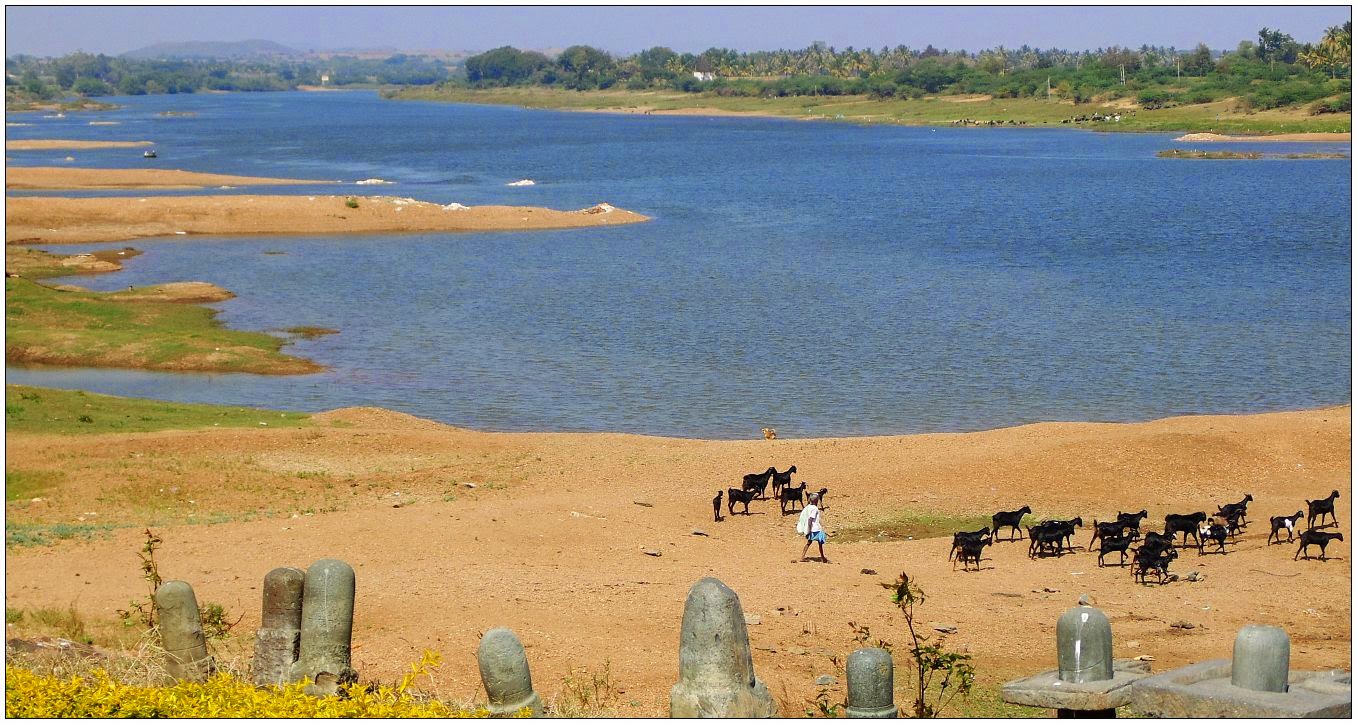