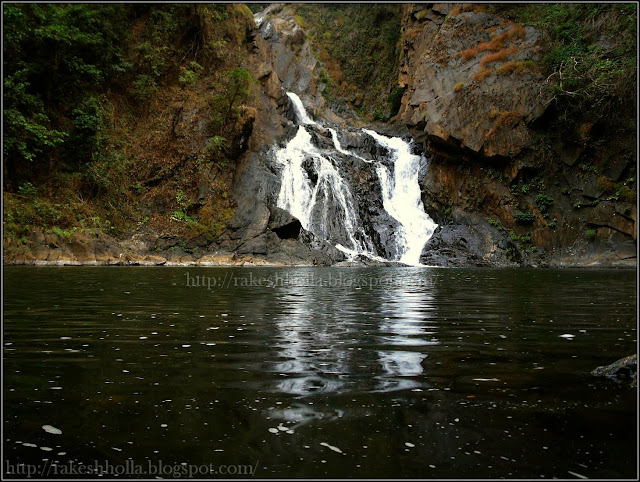 There are many beautiful natural places and things to venture in this world among them the waterfalls. It seems people are naturally drawn to water, falling from soaring cliffs or dropping in short bursts among a river’s edge. Trying to find a waterfall can be an adventure in itself and when you arrive there you are rewarded with a majestic beauty of nature. 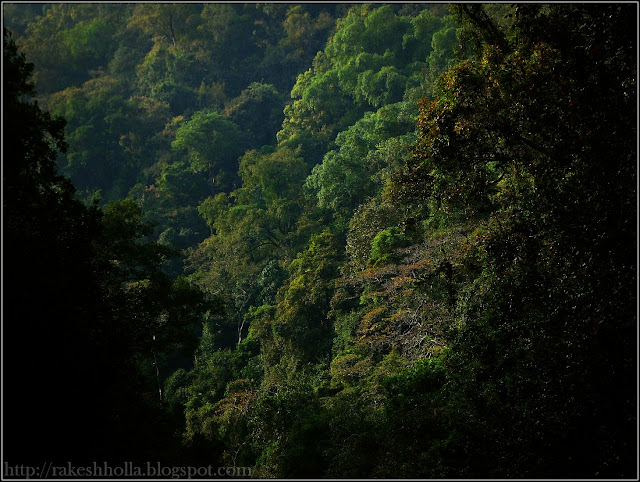 There are few Waterfalls in Western Ghats that can qualify as a true winter trek. The Muktihole is one of them situated in an area that received rainfall for about 8 months a year. The tranquil Surroundings, gurgling streams, crystal clear water, rolling green hills, dense forests and full moon night will blow you off your feet on fantasy world. 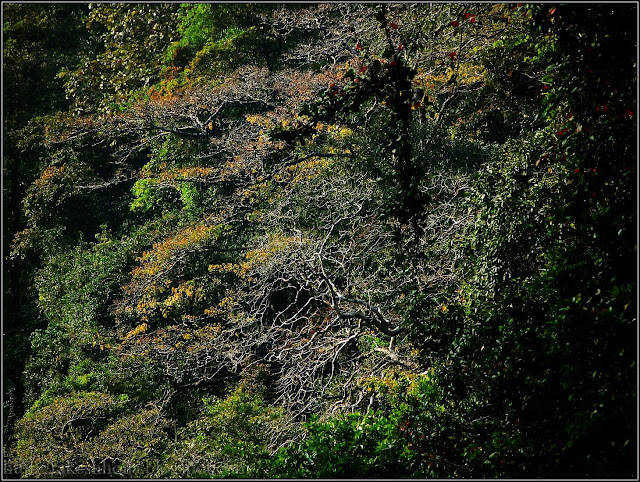 The weather was quite hot and humid with occasional breeze, we 16members team started our trek, 2 of my local friends also joined our team to lead us. The trail begins next to the Hirebailu bus stop, through the village and into the woods. We started venturing into the thick rain forest with a slow ascent. 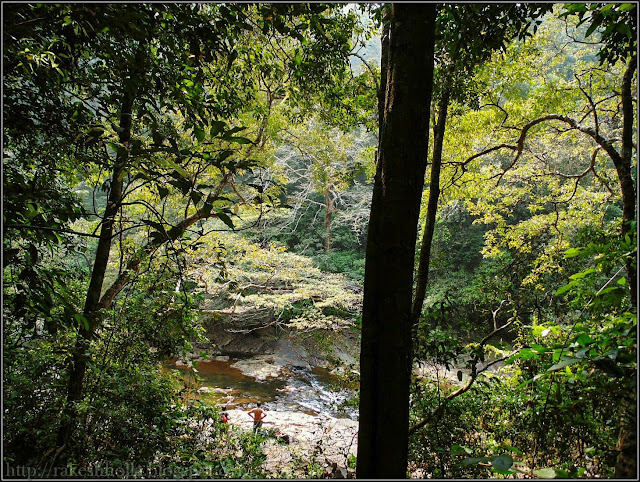 The areca plantations, impressive hill ranges and green scenery is outstanding. The thick cover of vegetation provides adequate shade and keeps you cool. After about 30 minutes of ascending through the woods journey becomes a little more difficult. The terrain becomes steeper heavy load on us made us get exhausted very quickly. 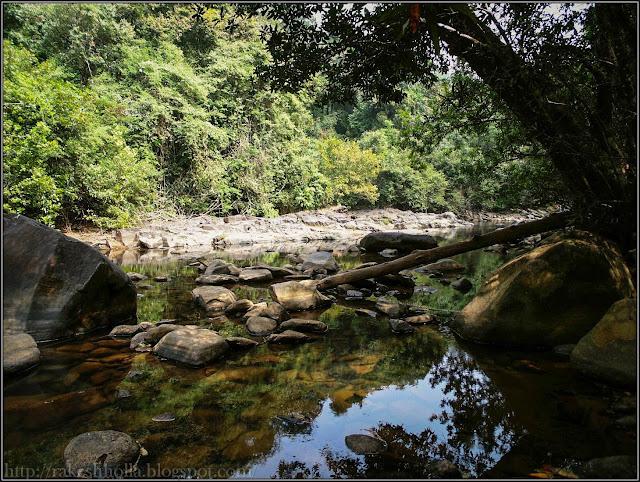 After walking through the forest for an hour, we finally took right deviation into the valley the further forested trail going inside the dense forest. We were walking on a mountain range overlooking a valley in which Muktihole river was flowing. The section from here onwards is a steep downer climb of over 1.5km into the valley and by 12 pm we reached to pristine river. The beauty of the place hits you the moment once you step in to the river. 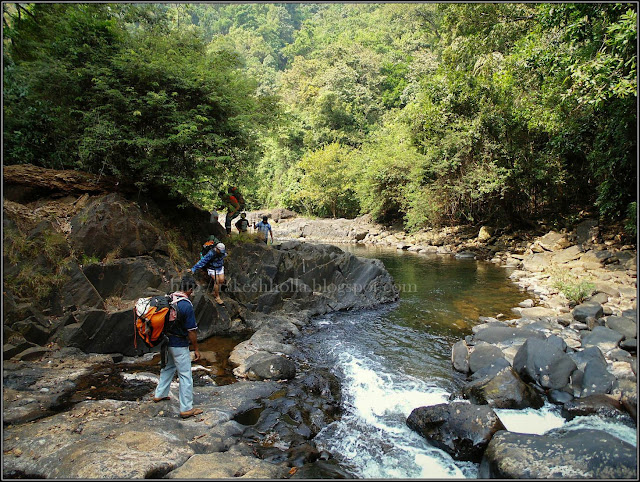 Most of us wanted to take rest after an hour long descent so we decided to get ourselves relaxed a bit. Many couldn’t resist the beautiful clear and cold water and jumped into the stream. The water was so cold. Can you imagine a beautiful, pristine surrounding with a nice wading stream to dip in, we had nice bath and we finished lunch on these rocks. 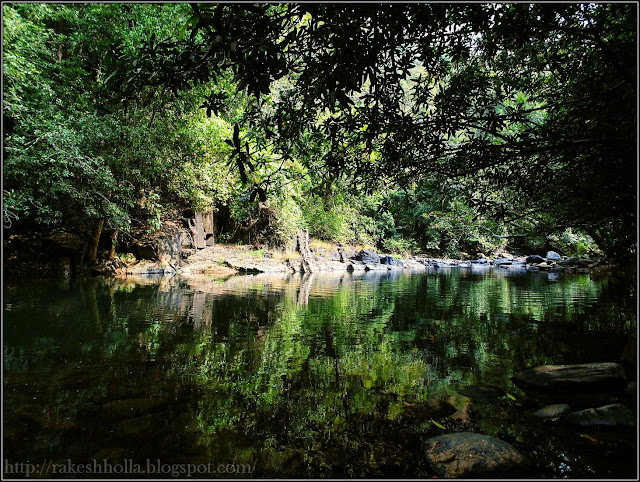 Continuing from here, another 15minutes walk through the stream which was flowing with good speed and we had to find a suitable place to crossover. We were able to cross it with reasonable ease using sticks for support. The journey seemed endless and we finally arrived a flat rocky terrain which surrounded with vast pond, stream and forest. The view from here of the entire valley is really a treat to the eyes, as you can see clear waters of Muktihole, with its several twists and turns flowing down. This place is so serene and peaceful that we decided to setup camp right there. 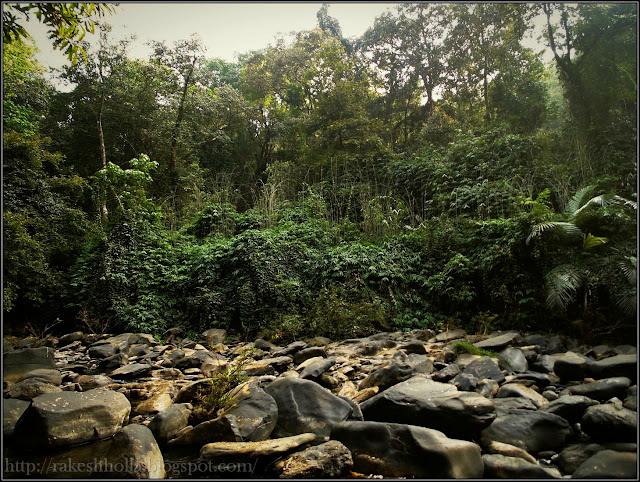 We unloaded our backpacks had nice tea and continued our journey. The last 3o minutes of the trek have multiple boulders along the bank to negotiate. The walk along the stream itself will be a memorable experience. 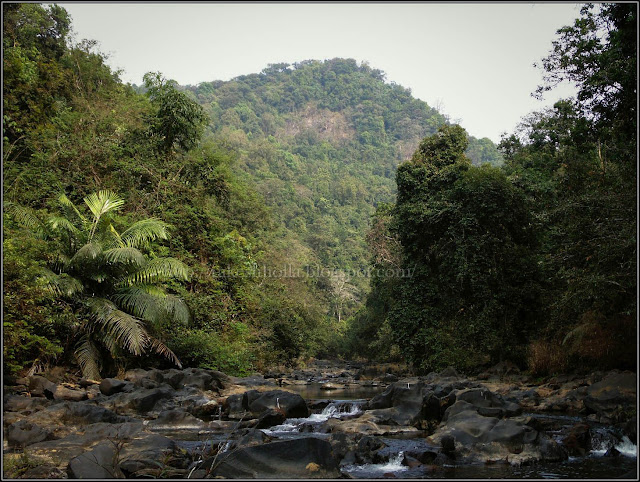 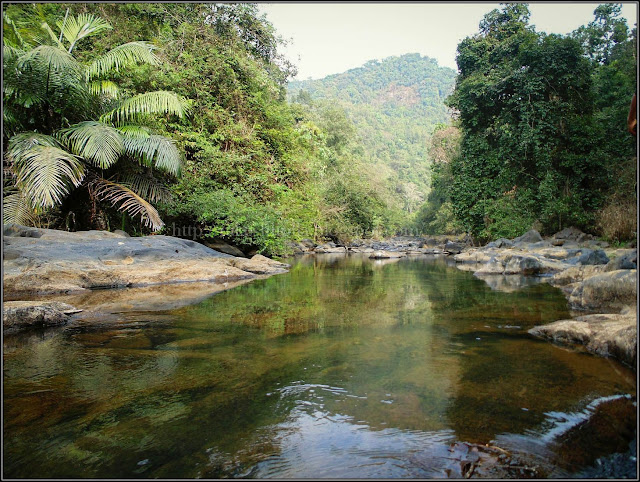 One the way we witnessed similar type of ecology comprising the fauna and flora- flowers, shrubs, mushrooms, dead trees. As along our way it was evident that the Mukthihole was truly acting as a flawless mirror in this so far unadulterated and untainted space on planet earth. 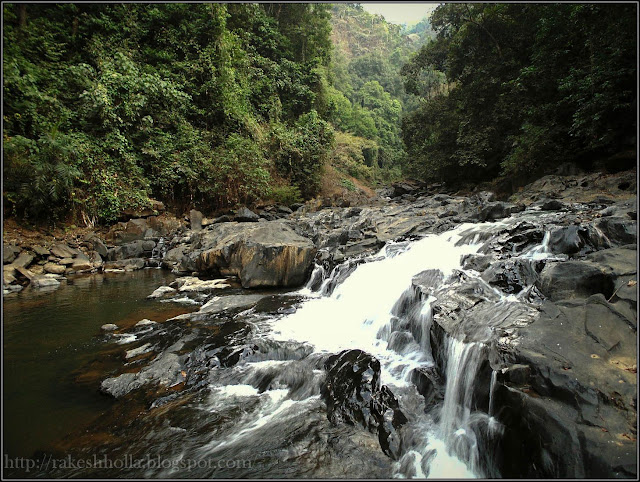 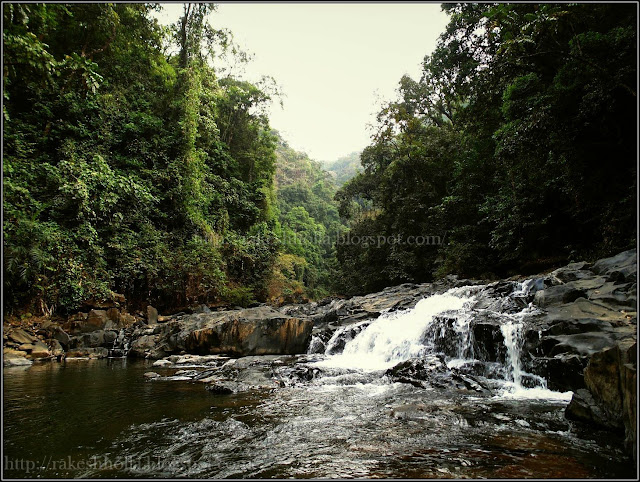 Overwhelmed with the splendid beauty of surroundings we continued and after continues walk still not reached the exact base of the falls and hence ventured into the forests to decent view of the falls. It is located in such a place covered with dense forest towards its approach that it is not visible at every point on the approach path. 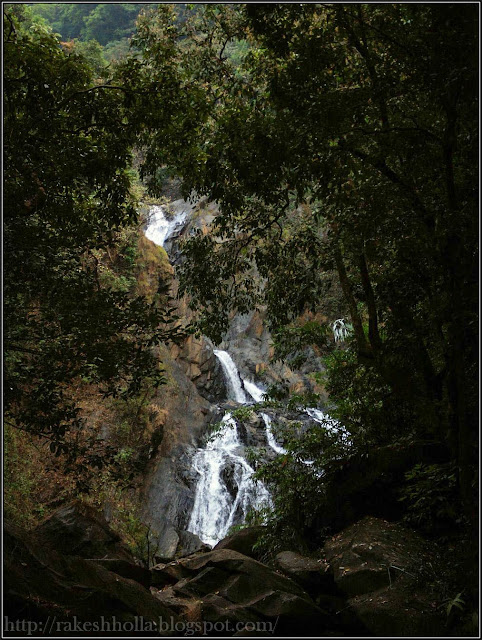 At 5 PM we reached another rocky clearance from where we had to decent view of the falls. Proceeding further along the boulders way our grand view of the full height of the falls eventually gives way to just the lower waterfall as the views of the upper waterfall become blocked. The waterfall drops in five major stages. The first three stages, which is said to plunge around 200ft. Since the falls faces out towards a wide open valley, it also happens to be one of the toughest waterfalls to both see and access. Just the fact that it was a long and tiring hike with some serious elevation gain made us appreciate just how beautiful Muktihole really was! 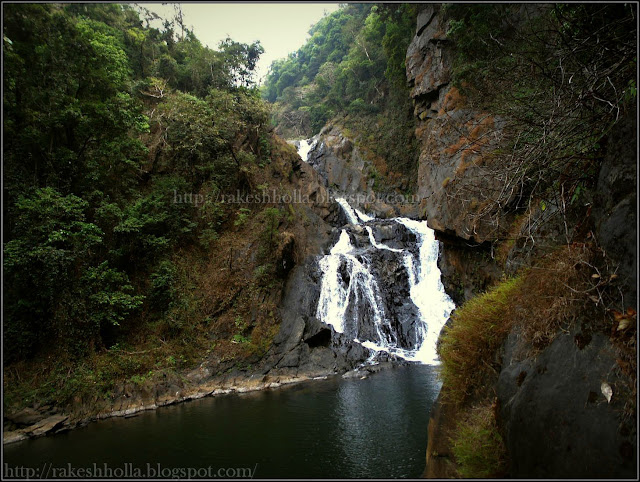 What makes this falls unique is that it’s shaped like a curtain of waters falling from umbrella like rock formations. Since the water is separated by several rocks, the water drop is not that strong compared to other waterfalls. But that’s the beauty of it. It’s different from other waterfalls. 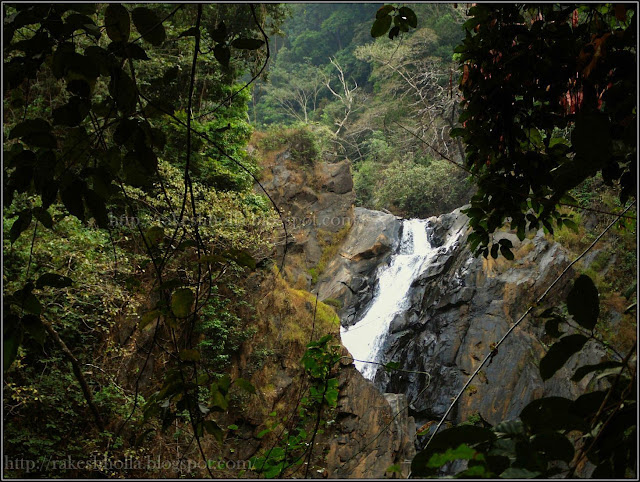 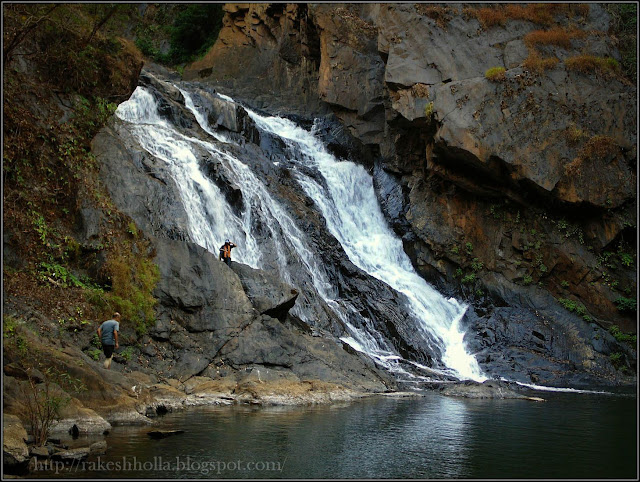 One can reach to the level from where you can see the three stages of the fall but to see all the five series of the fall, you may have to climb higher and tread difficult terrain. We decided to end the quest here since the path ahead to the ultimate level of the falls was difficult and it was already well past sunset. 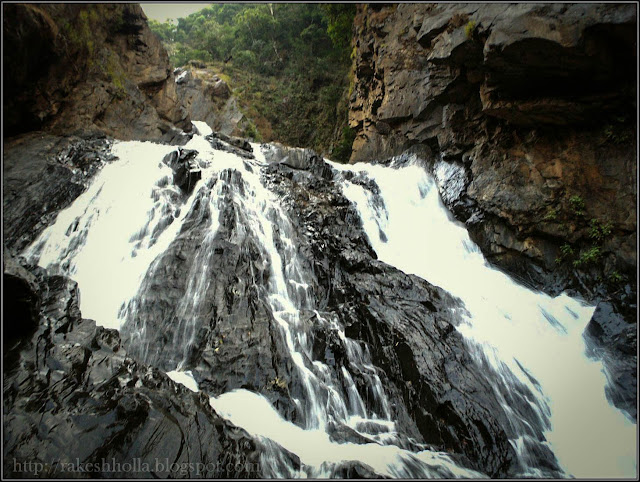 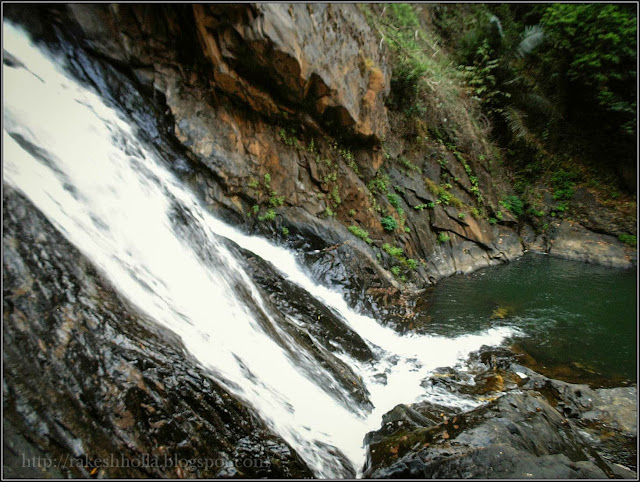 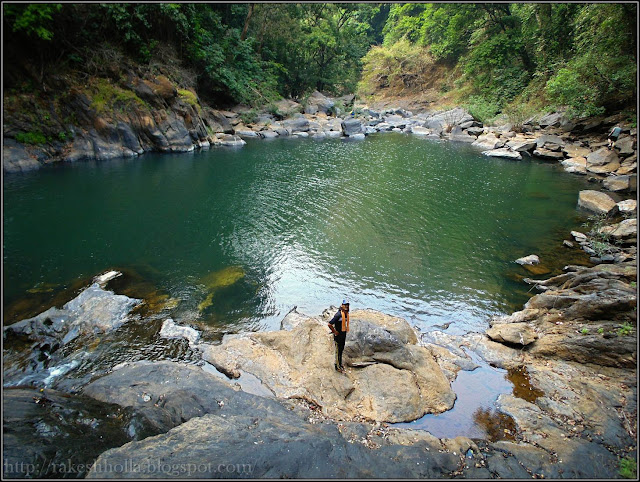 It was almost dark by the time we reached back the camp, we had refreshing dip in the cool mountain water and spent some time playing cards enjoyed campfire and had dinner and slept after a long adventurous day. 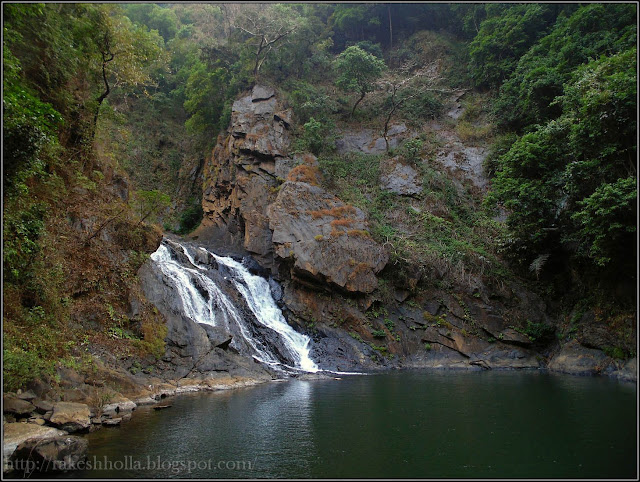 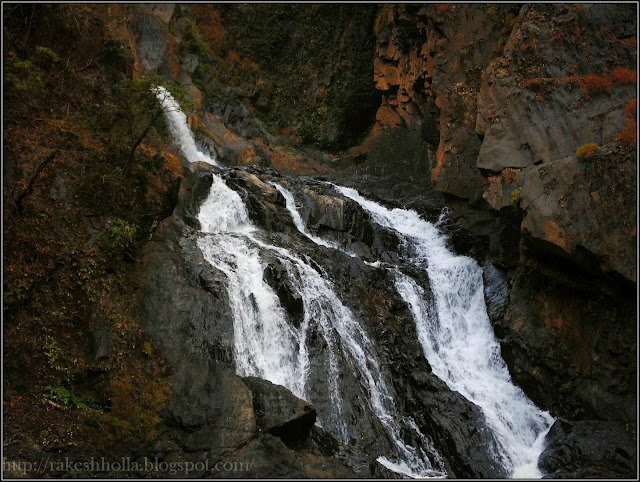 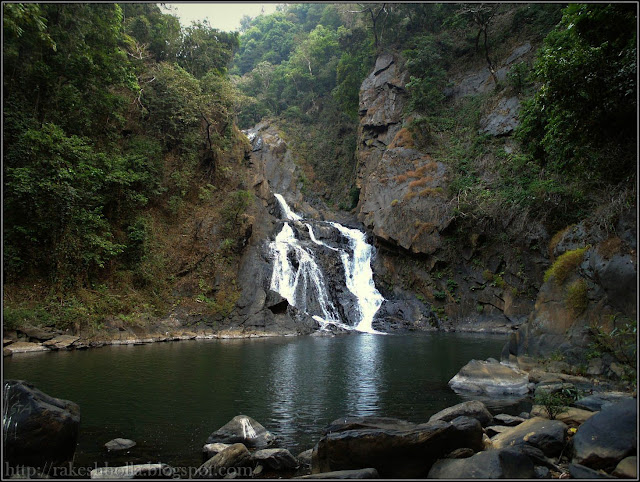 This is probably one of the favorite vantage point for photographing Mukthihole Falls. That's because we were able to see the falls reflected in the huge pond. 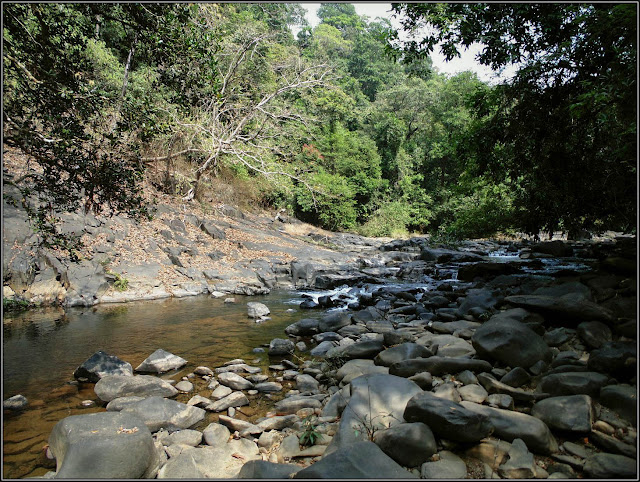 It was a good plateau area and we were right in the base, of mist covered mountains. The sound of stream next to us was amazing, full Moon welcomed us soon. Her glow was serving us at this picturesque camp. The Moon at a hand’s distance and looming large was accompanied by Milky Way in the background and devoid of any clouds. You simply can’t ask more for a better view from the Mother Nature. Mother Nature grants us her blessing on this night have been written. 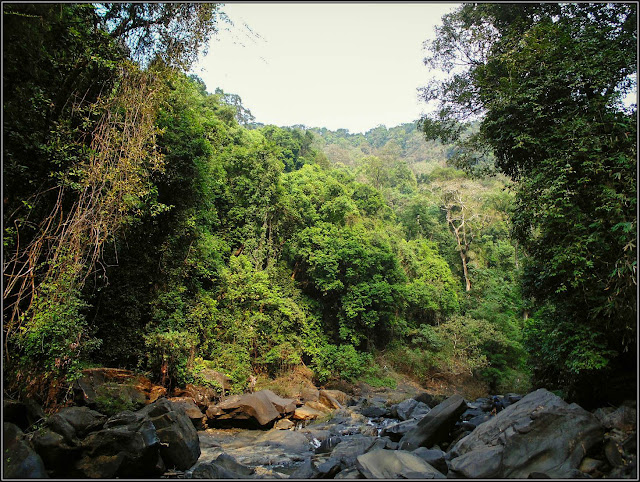 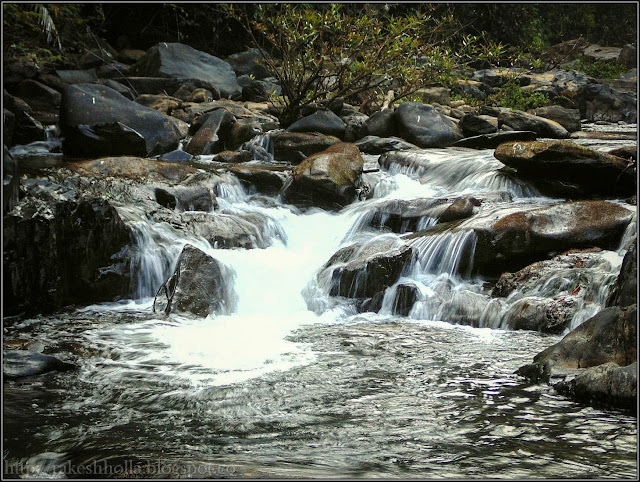 We were all relaxed after having slept adequately in a comfortable environment in lap of Mother Nature. It was a chilly however the hot cup of coffee and noodles for breakfast made our spirit come alive. The Sky was blue without a single spec of cloud. The sun felt warm and relieving. We started for our trek immediately after breakfast. We had to take frequent breaks, leaving behind the river course, we started climbing the ascent way the climb was steep and steady. With the knees and the toes exhausted by the continuous ascent. 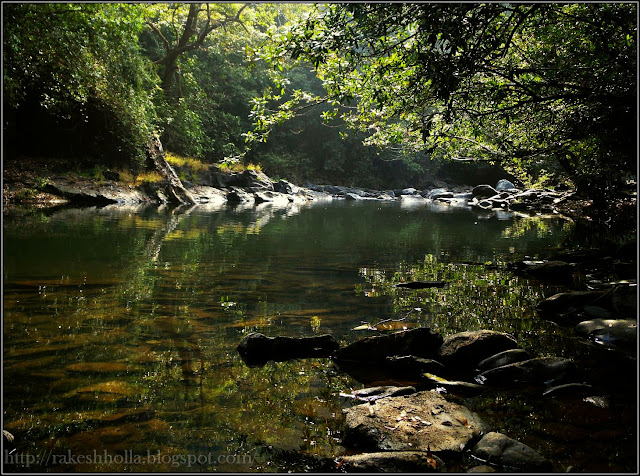 On the way back, it took two hours for us back at village. It was not just about the falls, but this also turned out to be good trek worth remembering. This waterfall has special place in my heart and lots of fond memories remained here that I love to reminisce. 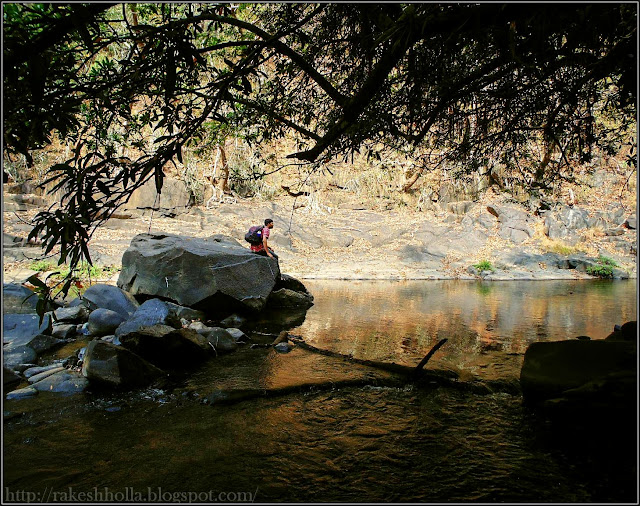