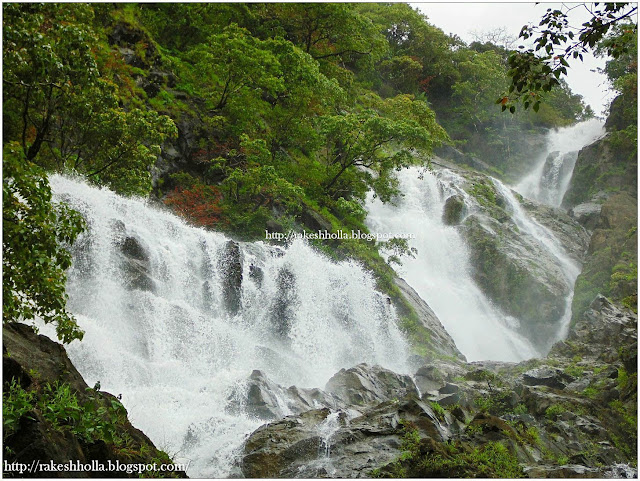 During monsoon the rain drenched forests of the Western Ghats can give off an eerie glow allowing a rare glimpse into one of nature’s spectacular eccentricities. It was my heart’s desire to visit the Western Ghats during the monsoon, coupled with fog and mist, unspoiled greenery, numerous gushing waterfalls and plenty view points with relatively less crowd.  Lot of planning went into this trek we were looking forward for this monsoon trek since it was quite some time we had gone out during rains. 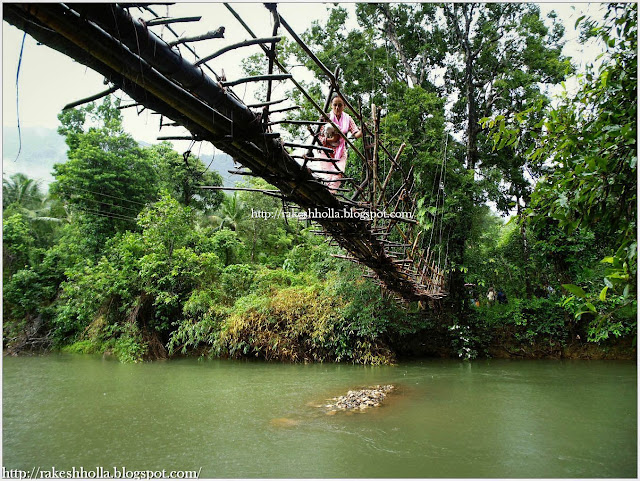 On the morning of July 4th at around 7AM we left Honnavar in a hired tempo. It was drizzling and all through the route. Western Ghats were its best in this season, green everywhere you could see and filled with countless waterfalls and I would say this is the best time to explore waterfalls when everything around water is alive. We reached the village around 8.30 AM. My friend and our guide Mahabaal was there to welcome us, further he impressed us a lot with his courage, manner, navigation and arrangements. 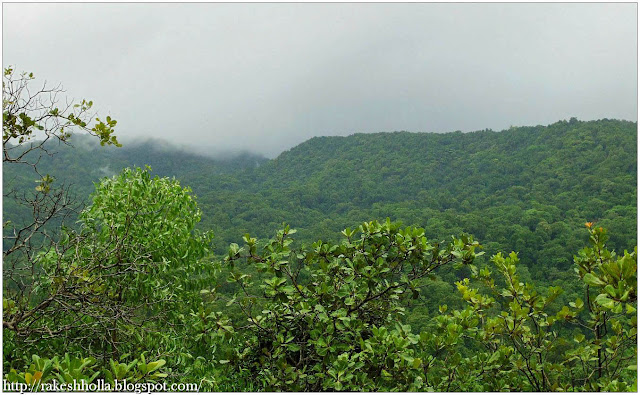 We followed him through narrow wooden bridge to a small house where his uncle living since 40 years. They prepared for us some delicious food; I just loved the food and Jack-fruit. After 1 hour break we started trekking with limited languages. By now it was again raining heavily. The dark storm clouds gathered above the craggy pinnacles in front of us as we readied ourselves to hike. 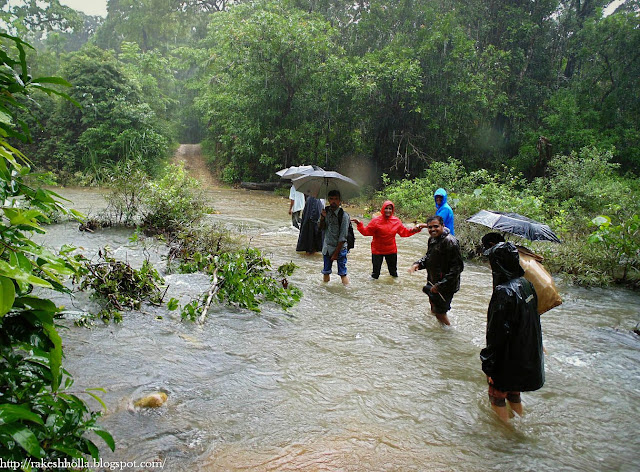 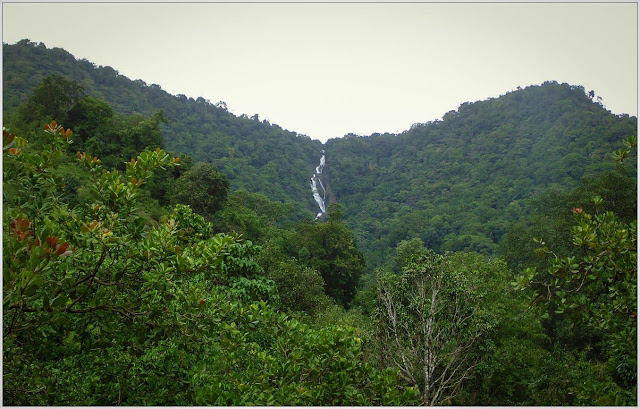 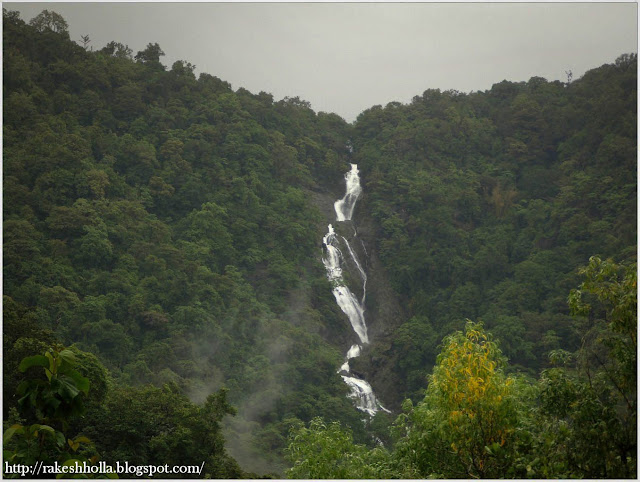 The initial trail was incredible through the green soaked sleepy hamlet. The road was highly scenic. Rain smell of eucalyptus was very pleasant though after a very tiring journey. It was nice to sight many orchids, fungi, lot of geckos, smaller streams, many wild flowers, insects and many more in those thick woods while walking. Green mountains, Areca nut plantations never ending small streams wild flowers were enough to make anybody a poet. 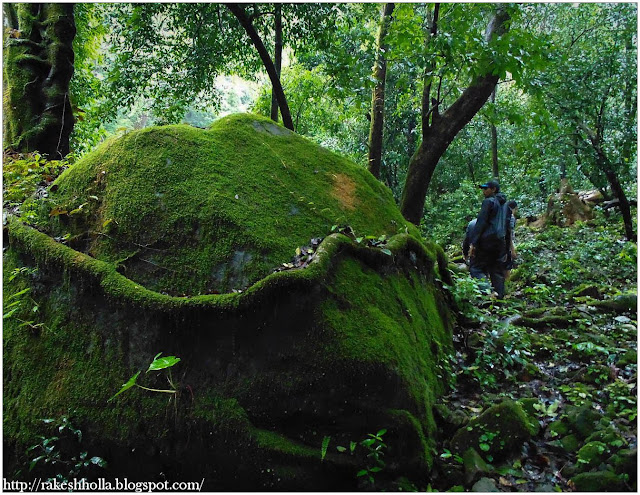 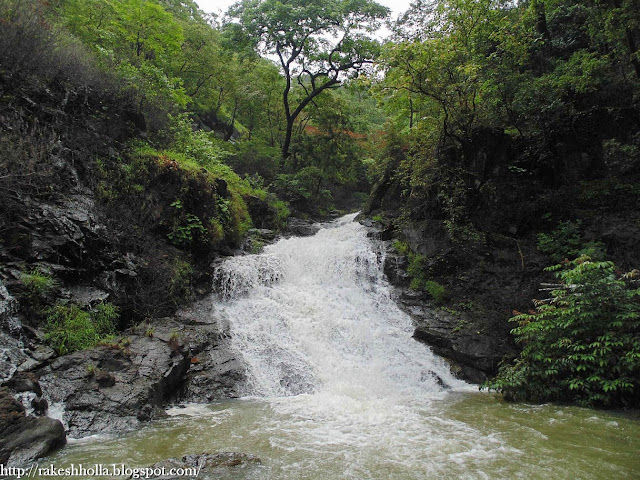 There was nothing but the sound of the flowing water and that of the waterfall at a distance was simply magical. Gushing milky waterfall on end was a pleasure to get drenched but the main difficulty was along with skies opening up mother earth also decided to sing and dance down the mountains in form of swollen streams making it really tough testing our strength to the maximum, but of course we did manage to cross most of the streams. 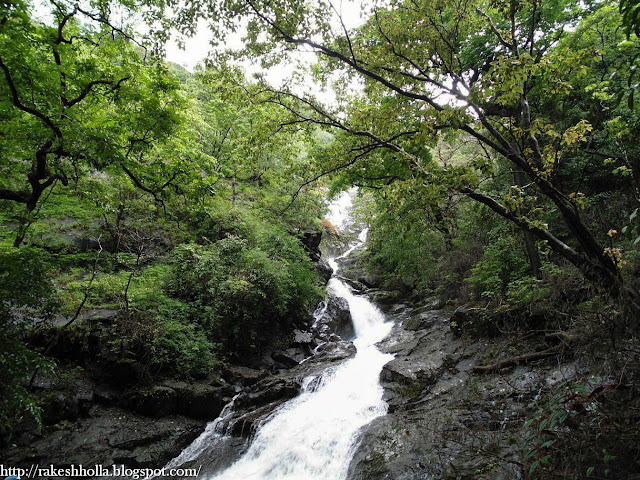 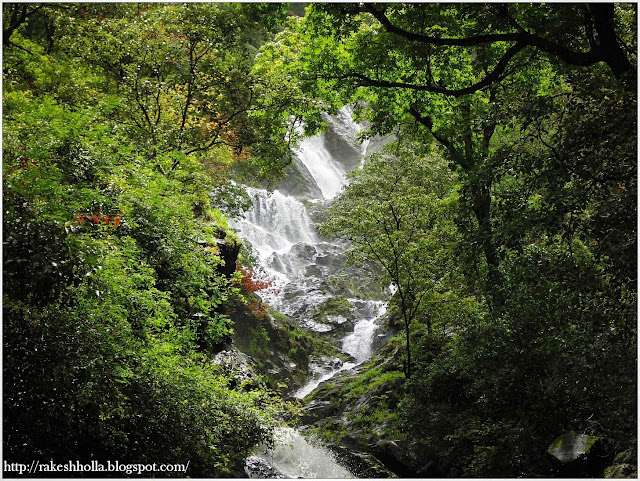 Thankfully there are no leaches here like in the Western Ghats. After crossing several streams we reached the base in around one and half hours. It was a nice to walk in the rain, and on slippery rocks with leech and passing through numerous streams and amazingly huge trees. We didn't know if it was the rain or the fall we got drenched in but we were so engrossed in its beauty nothing mattered except for nature's beauty. 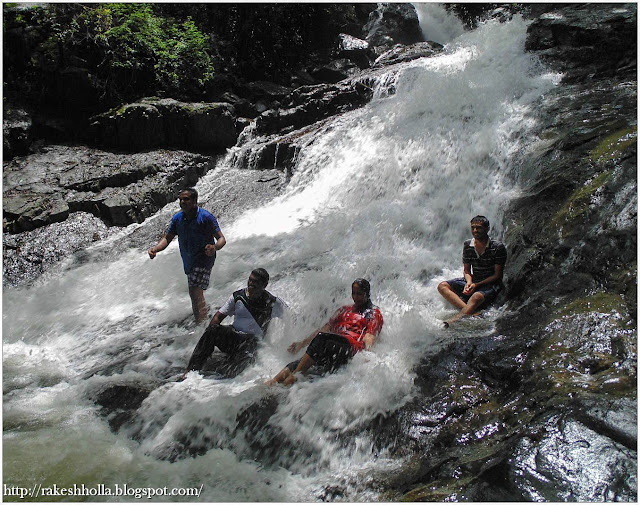 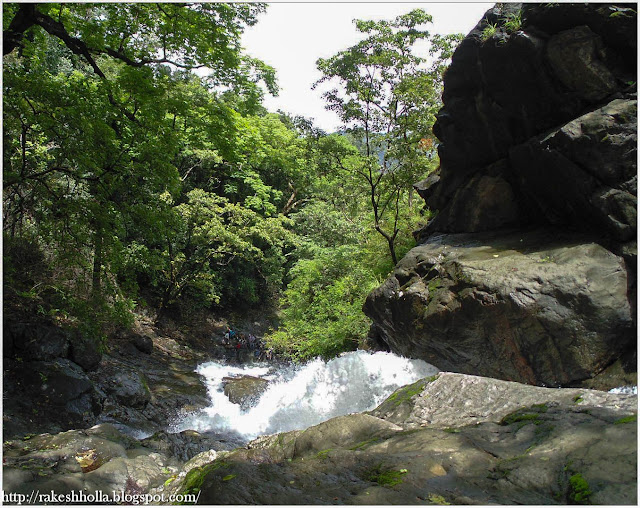 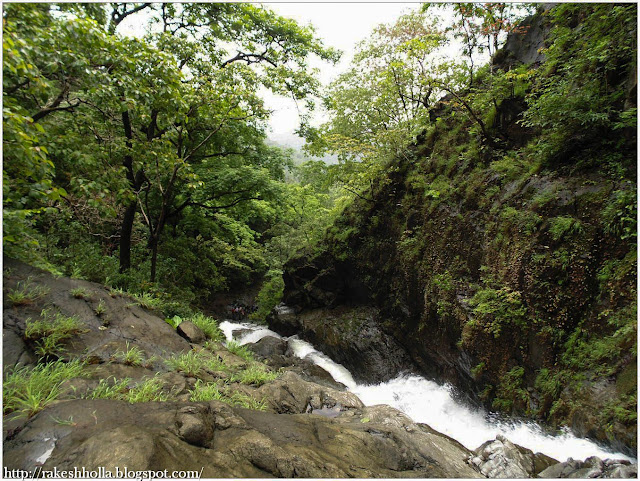 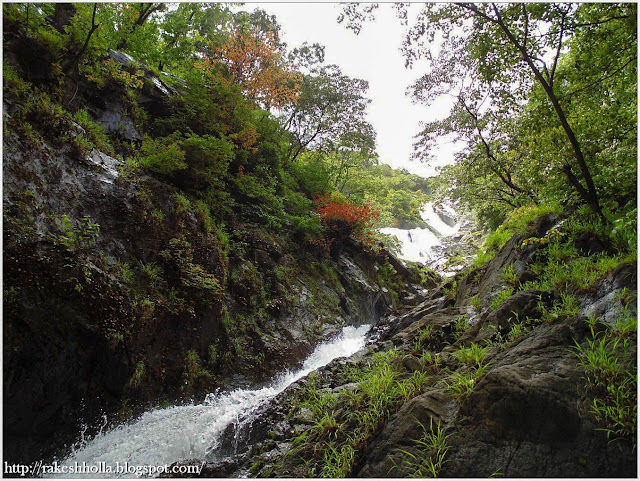 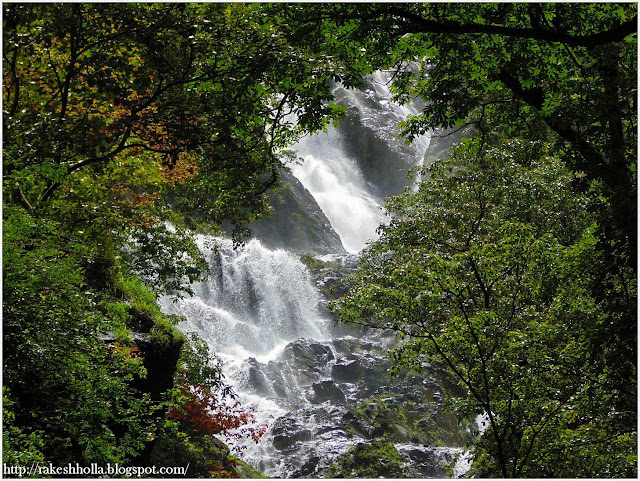 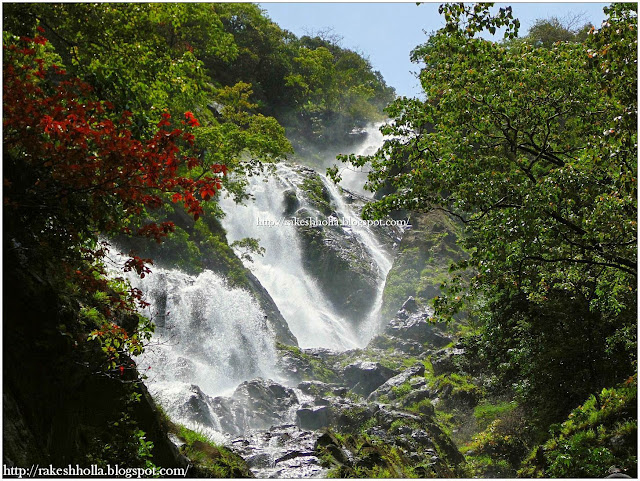 Deep inside the jungle a mixture of sweat and rain was tricking my face as I scrambled though a damp narrow cascade. We were just there and it was amazing to see the spectacular waterfalls, here water plunges in 8 stages and the fall is in its full glory during the monsoon. Standing bottom of the 5th stage on one side of the deep ravine looked into a waterfall filled with lush vegetation, wild flowers and the steep contours formed a dramatic foreground to the rising hills and clouds brewing behind me, every inch of the earth suffused in a generous green. 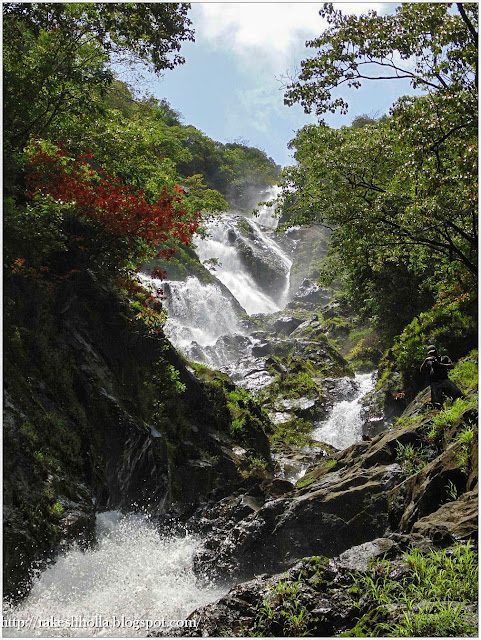 Usually the upper section contains loose rocks and is not climbed while people are below. Failure to hear the warning, Inexperience with area I made a wrong attempt and witnessed a bad incidence. The rock had at least a 20 meter unobstructed fallen to one of my teammate back with minimum harm. 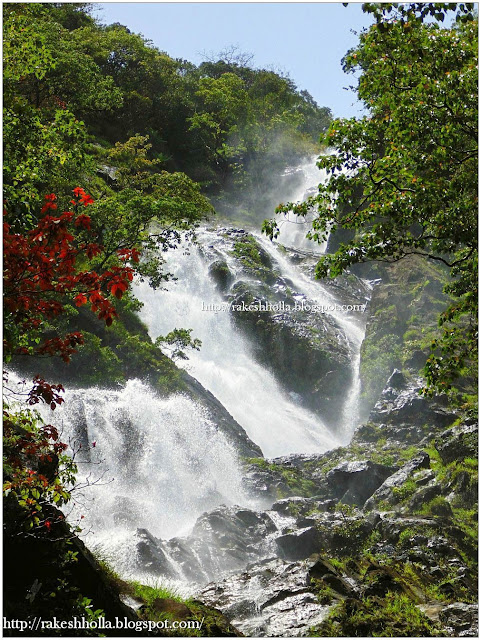 We had our pack lunch nearby stream and our afternoon hike through the small tribal hamlets had extended late into the evening, hindered with incomplete attempt to the hidden waterfalls. 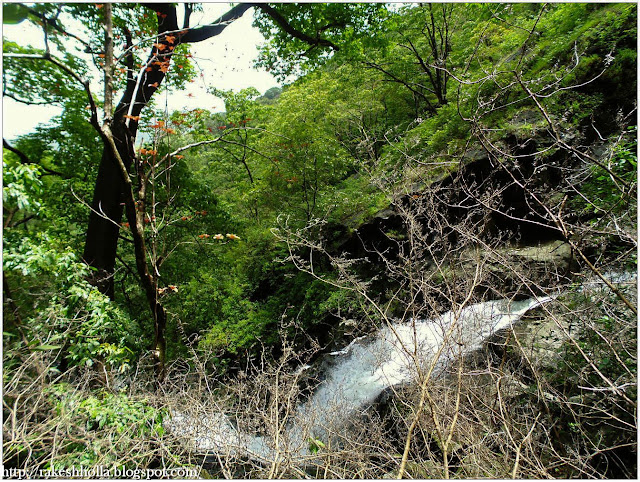 We filled our heart's content monsoon trek was at its best. From the start to the end we were blown away by the beauty and serenity of the trial.  We stopped many times to remind ourselves how lucky we were and to revel in the natural beauty of our surrounds. What a wonderful trek. Mahabal was a wonderful guide so perceptive in how he cared for us throughout the journey. He was completely at home in this landscape and looked after us brilliantly. 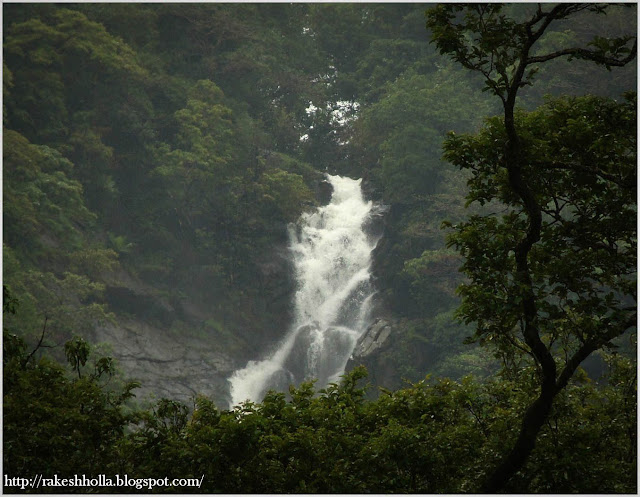 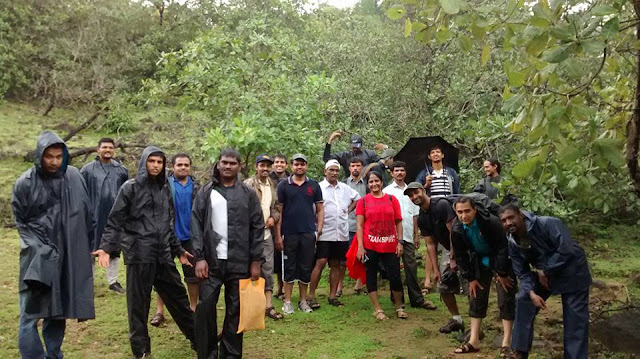 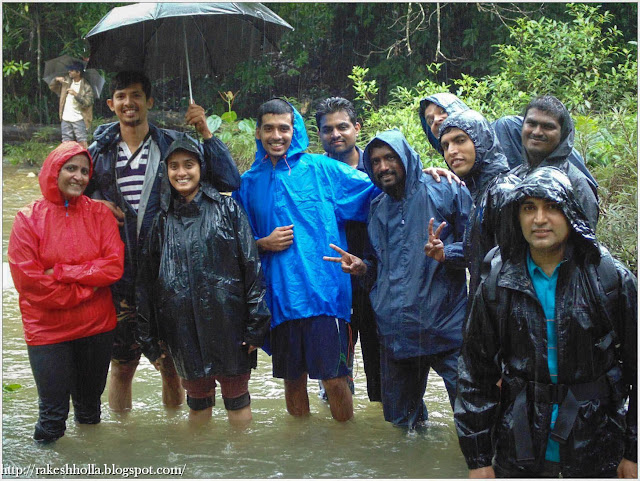 I would like to thank the each team member for making expedition successful with such wonderful trekking experiences. That love for walking on country is very infectious. I really hope to come on more treks with this team in the near future. My feet are already itching for the next adventure! The experience was very important to me, something I will treasure for the rest of my life. 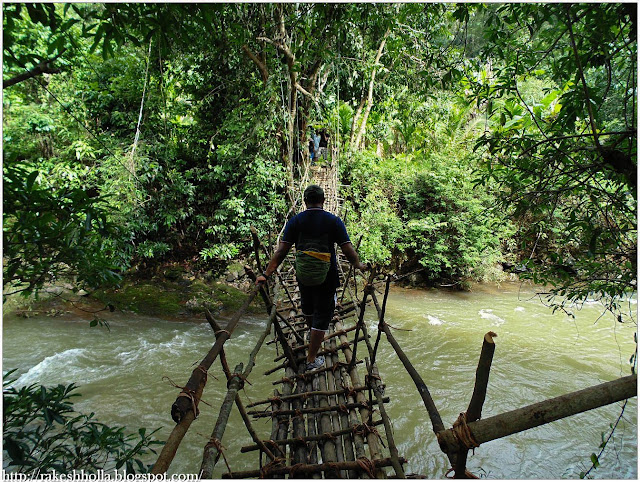