Maloorugundi Waterfalls - A Day I will never forget… 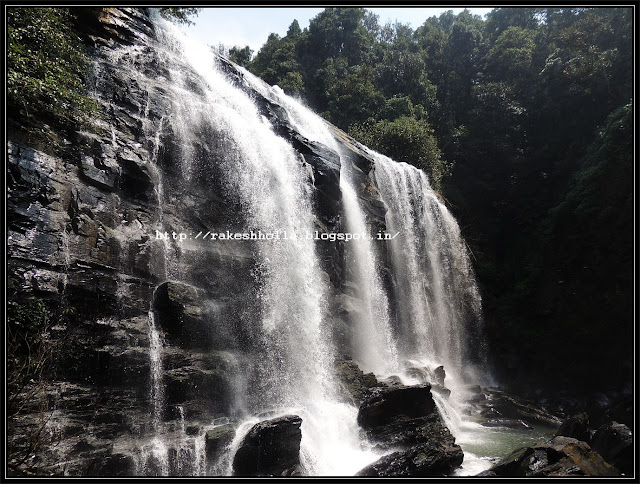 The Malooru Gundi is the perfect destination for anyone who is adventurous and for anyone who wants to go where most others wouldn't.  This trip was one of the best hikes in life time; it has beautiful scenery of the Western-Ghats and ends at a breathtaking waterfall. 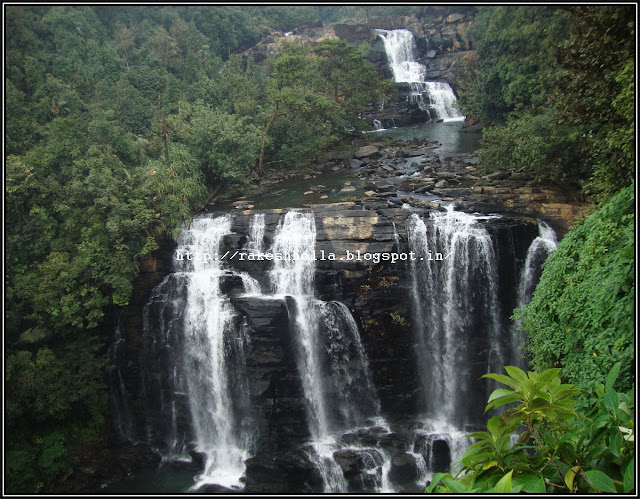 On initial stretch we crossed few mist kissed grasslands and later through thick jungles where sun never reached, every moment we spent in the rain-forest was a moment to reflect upon, making the day even more surreal and after walking for an hour of medium toughness level terrain, finally we made to reach top of the waterfalls. 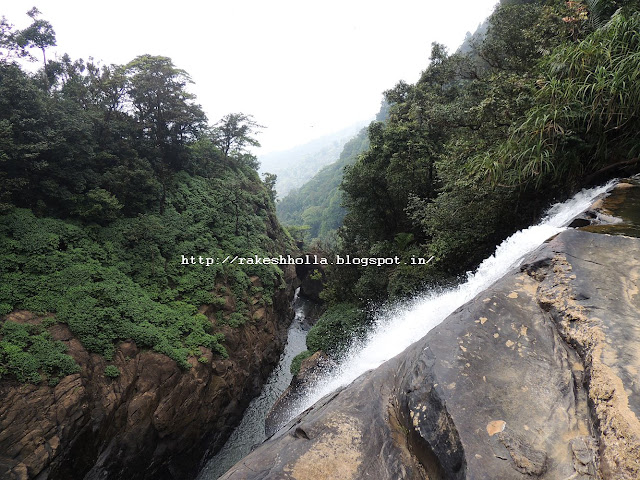 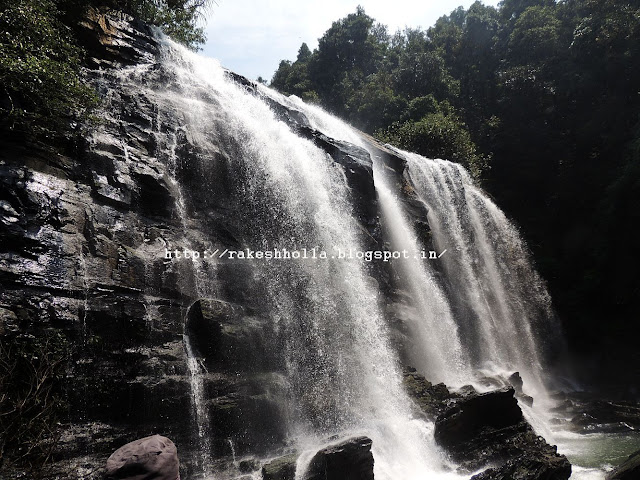 We had some stunning views out over the top of the waterfalls and we were heading down towards the Maloorgundi. We reached the base having risky climb catching hold of strong branches that leap all over the rock-strewn hills. This region was pretty dangerous because of the thick vegetation and steep ravines. While climbing down the moss makes staying on feet especially difficult. 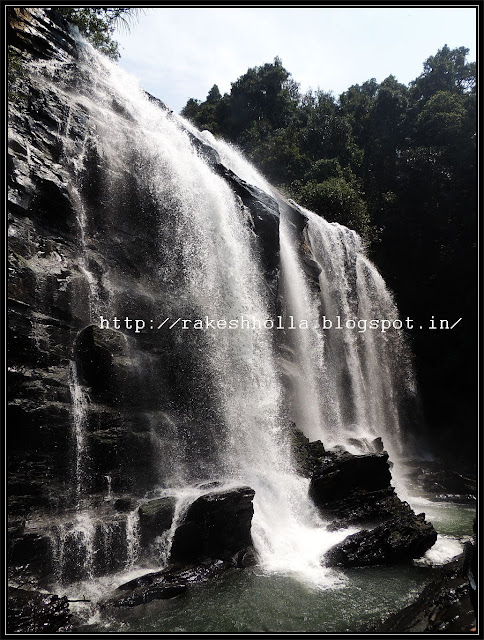 We reached MalooruGundi falls, which was one of the best falls in terms of overall rating that I have visited the way we approached it, the surroundings, the looks etc. We unsuccessfully tried getting under it, and the closer we got to it, the faster it pushed us away. I stood looking at it for some time trying to capture it forever in my mind. 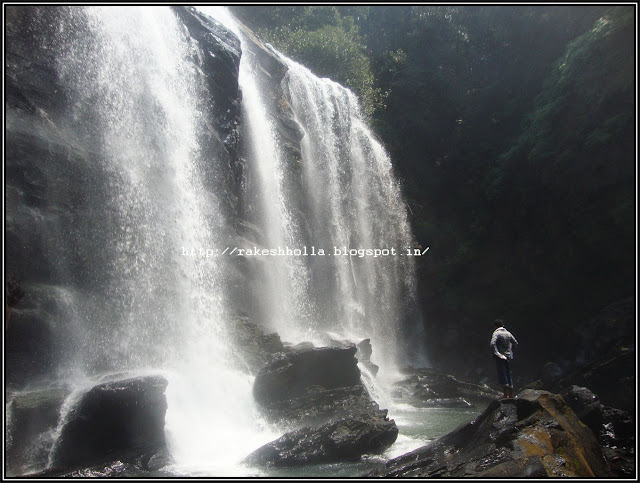 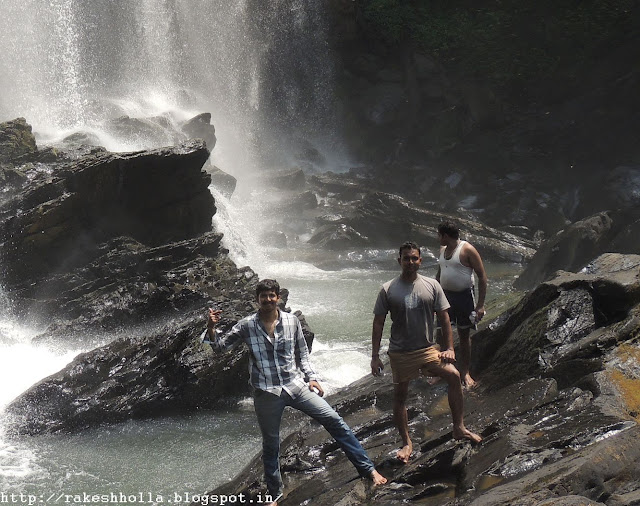 All we enjoyed the sheer beauty of the falls the sheer power with which the water was flowing down and it seemed that it would pull you away along with it and throw you into the gushing black rock hitting water below although we tried to reach close as the rocks near the base are sharp and very slippery. 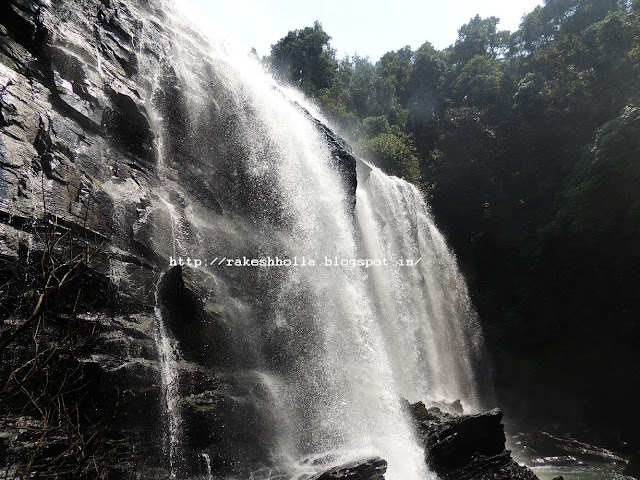 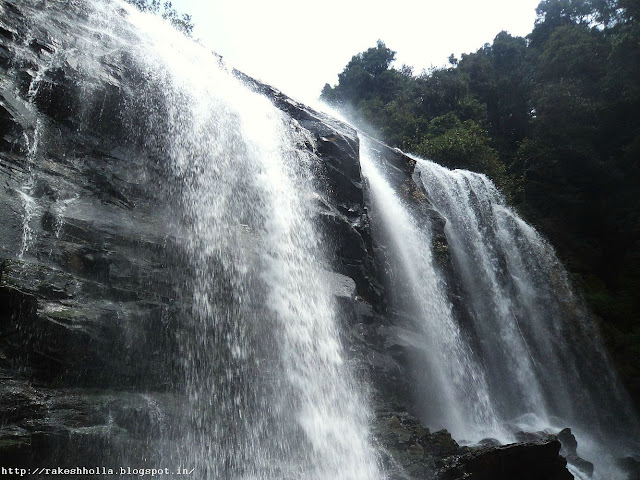 Malooru falls is actually a string of few falls in the Ktkr River on the low hills surrounding.  They offer some nice hiking and a relaxing setting.  Malooru falls is in a SV Wildlife Sanctuary and contains the impressive waterfall where the entire stream flows through 25 meters widen rock slab and drops from a height of 35 meters and further pass into a narrow river canyon. 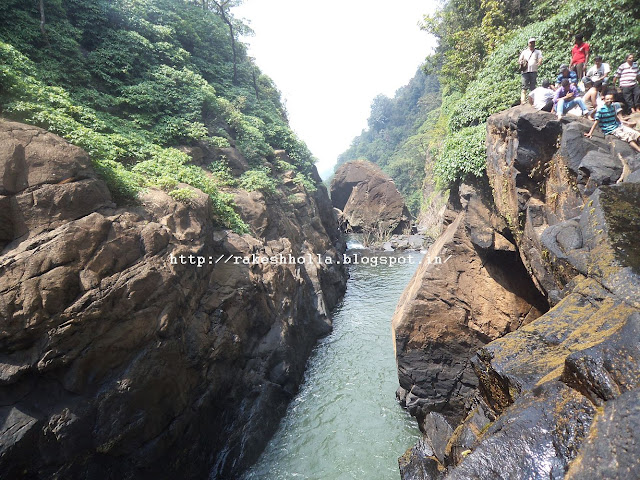 I want to say MalooruGundi as a Niagara of the state; the water fall was downright breathtaking. We caught a couple of brilliant shots of the falls, and the roaring of the waterfall was so loud that we were barely audible to each other. The water fall-down into the pond, and throughout maintained a white rage, splashing dews and sprinkling water into all of us. It was really wet and there was a lot of mist and the lens kept fogging up. There are not many places like this anywhere in the world, and certainly not in Karnataka. 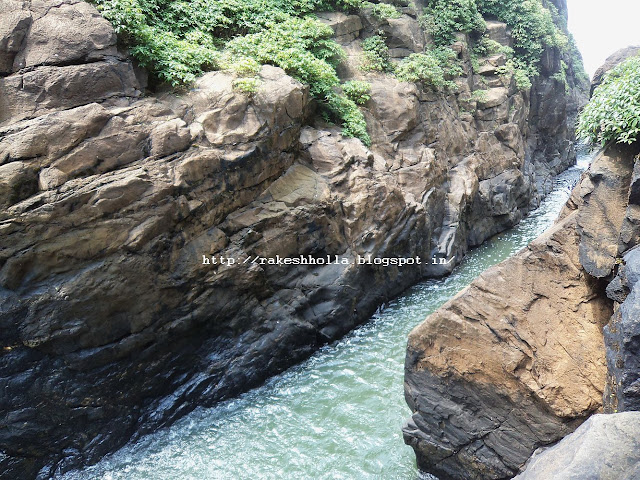 Later we planned to check out the third and largest waterfall in further down. Our guide told we can’t approach any further level but he willing to try once. So we continued up to the jungle land and after 15 minutes dangerous lynching walks on these mountains are incredible at one place we find one open place from highest level. From the open space we had a fantastic views looking out onto waterfalls northeast wild region relatively unknown and here it drops from the height of 85 meters to downer ledge and it was very impressive to sight. 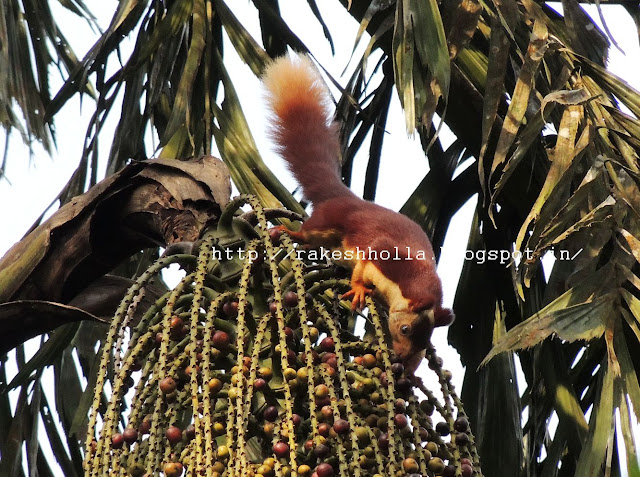 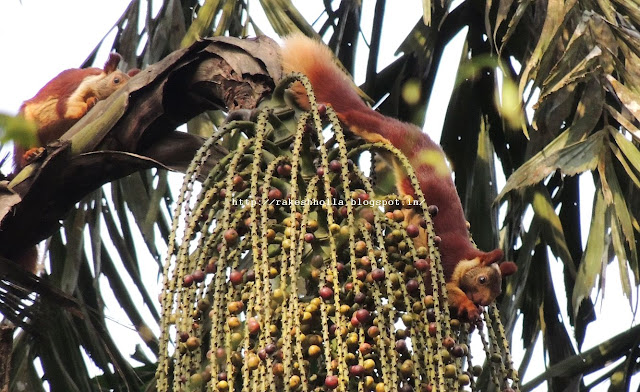 This is Malabar giant squirrel living in India. This one I saw in a forest Reserve is considered as the most beautiful of all squirrels in India. It is a large tree squirrel species which is listed as an endangered species. 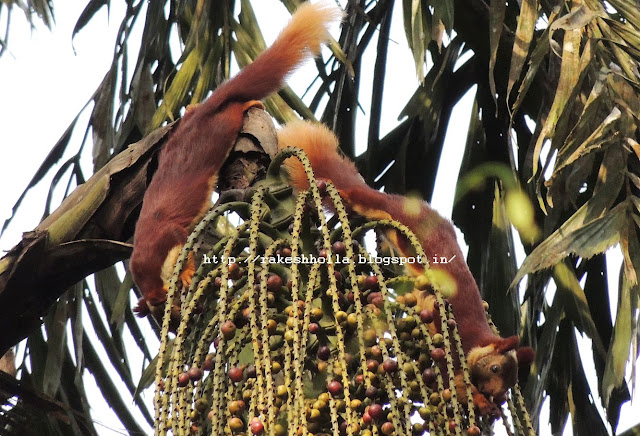 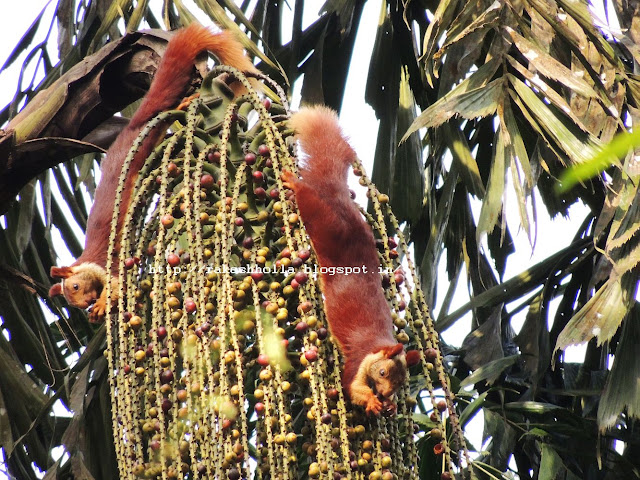 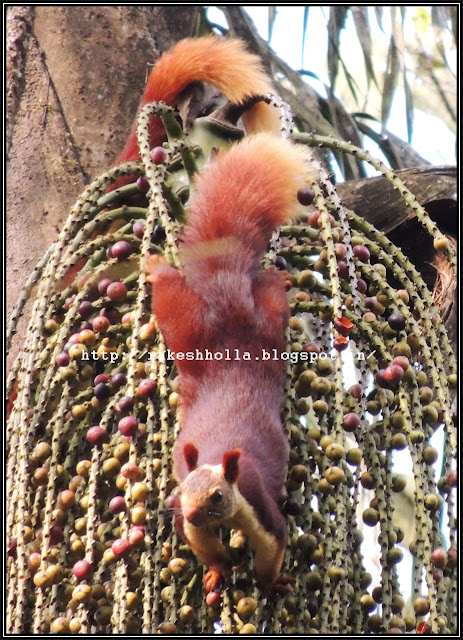 We took a slightly different route back to the top of the waterfall and few of my teammates forced our team to discover one more view of this waterfall from opposite side rocky hill. We were spellbound when we had a close view of the waterfalls, from midst of the jungle, standing on a trail that never existed, that slipped all the way into the ferocious falls. 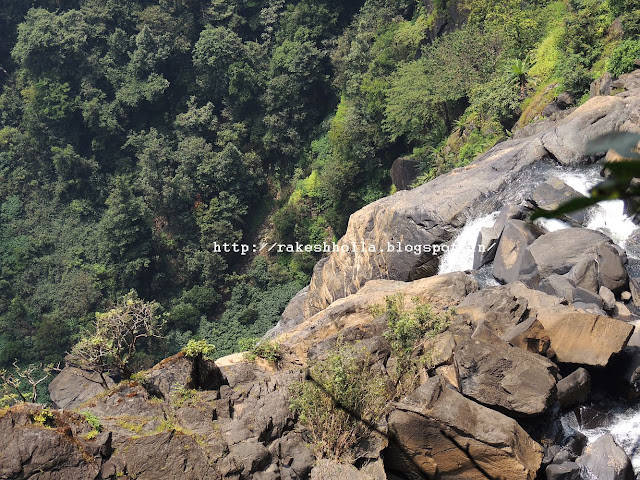 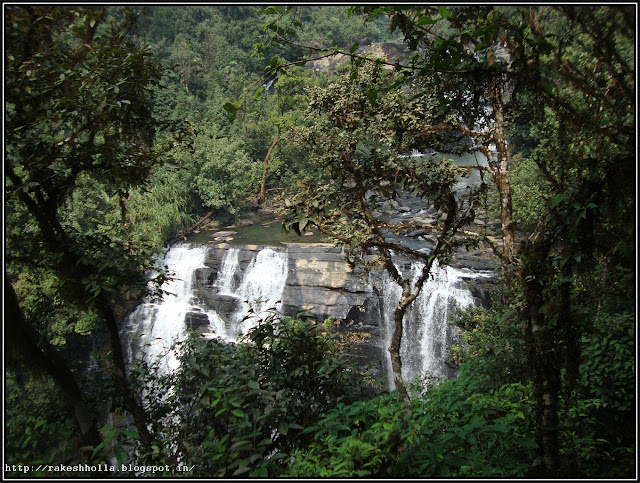 The set-up and effort to trek in them is definitely more worth. Our guide Halappa was very friendly, informative and very knowledgeable about the surroundings. He knew the area well, and kept us all well interested with his interactive approach. I like to thank my friend Shrikanth Datta, my teammates and our Taxi Driver Manoj, for all their vigorously support to make this a successful expedition. 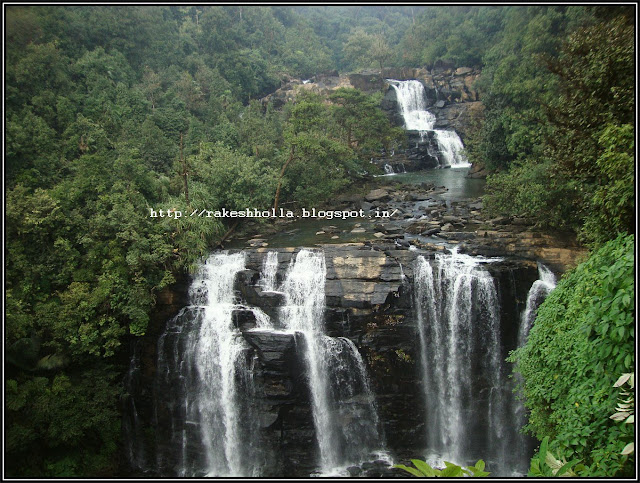 After visting this place multiple times, I always wondered if anyone else can give a different perspective to this magical
land and a new dimension to photography.

Reading the blog and delighting photography of Rakesh and co, I am just impressed at the indelible dedication to love of nature and
risk-taking attitude without which Mother nature's gem bestowed in the depths of ghats could not have been showcased.

Exquisite photography and obvious risky climbs and downs, end resulting in a stunner is what I expected from Rakesh and he has not disappointed. Great work mate.

Superb photos.. I missed the event...

Awesome pics and wonderful location. Appreciate your guts to tread such dangerous path.

If you're interested in having a guest blog poster please let me know. I will provide you with unique content for your webstie, thanks.

First let me know about yourself later we can talk Guest articles..
Thanks to all of you for your wonderful comments:-)

Please let me know how to reach this place form Bangalore

Just as good as your last post. Do you accept advertisers?

Is dis in shimoga wild life santuary,can you pleade provide the addres :)

Wonderful place and post... Can you please share more details about how to reach the place also? Looks like you have ventured to place where google can't :)

Thanks for the good writeup. It in reality used to be a leisure
account it. Look advanced to far introduced agreeable from you!
However, how can we keep up a correspondence?
Also visit my weblog - http://sswlink.spb.ru/

Hi, I do think this is a great site. I stumbledupon
it ;) I will return once again since i have book
marked it. Money and freedom is the best way to change, may you
be rich and continue to help others.
Feel free to visit my blog post ... insurance Companies

What's up everyone, it's my first go to see at this web site, and article is actually fruitful for me,
keep up posting these articles or reviews.
Also see my web site > online shopping uk

Hi there! This post could not be written any better!
Reading through this post reminds me of my old room mate!
He always kept talking about this. I will forward this page to him.

Fairly certain he will have a good read. Many thanks for sharing!
My webpage ... designer checks

I like the valuable information you provide in your articles.
I'll bookmark your weblog and check again here frequently. I'm quite sure I'll learn plenty of new stuff right here! Best of luck for the next!
Here is my site :: http://facebookmodels.com/index.php?do=/blog/32283/finding-sensible-secrets-for-ultimate-demon/

It's remarkable for me to have a web site, which is good for my know-how. thanks admin

Here is my weblog; Sherwood.Iupdhc.org

Very good blog you have here but I was wanting to know if you knew of any forums that cover
the same topics talked about here? I'd really like to be a part of online community where I can get feedback from other knowledgeable people that share the same interest. If you have any recommendations, please let me know. Thanks!

Hey you enjoyed lots... if you want to take countless trekking experience then go with Experiential Tourism Company in India Travel Themes

Reminds me of my trip to Mandalpatti and Kote Abbey Falls. Check out my travelogue for complete details: http://randthot.com/blog/anniversary-celebration-in-coorg-day-3-of-4/

Hello guys, Very nice write up.
Could you please give some information about reaching the place (location)

Everything is absolutely fantastic. But where on earth is this place. At least some clue.. This is tantalising...

Thanks for sharing such a great article and it's helpful for everyone. Great Post!...For more details visit : hotels in pench for the latest discounts and offers.