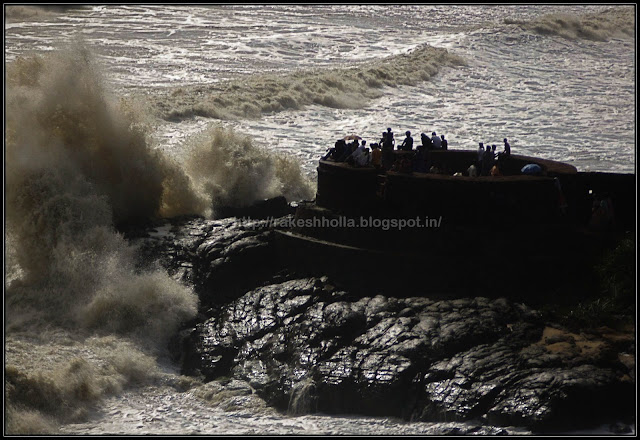 On June last Sunday My wife and I began the day with fine bike ride, as a first leg of our trip, we stopped en-route at Madhur and flew into Madhur Temple. The Madhur temple is a Shiva temple with Anantheswara as its presiding deity. But equal importance is given to the deity Maha Ganapathi. It is said that when the temple was being constructed the devotees forgot to install the Ganesha idol but Ganesha miraculously appeared in the rock and from then on he is given more importance in the temple. The idols of Shiva and Vinayaka are installed in Mukhamandapam and Sukasana’s. The Sivalingam of the temple is said to have been found by a harijan woman, Madharu. One can find references of this temple in the Sahyadri Centre of Skanda Purana. Devotees usually offer prayers to Mahaganapathi in the form of "Udayastamana". 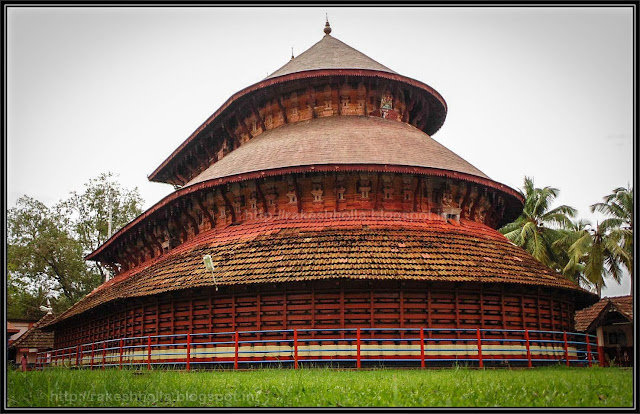 This temple is the most renowned one among the four temples built by the Mypadi kings of Kumbla around the 10th century. The temple was renovated in the 15th century and was built in a distinctive style in a three storied oval structure adorned with copper plate roofing. In 1784 TippuSulthan attacked Kumbala border and entered to Madhur area after drinking water from the well of the temple, he changed his mind on attacking and demolishing the Garbhagudi and marched towards Malabar. But to satisfy his soldiers and Islamic scholars he made a cut with his sword symbolising the attack. The mark is still visible on the building that is built around the temple well. 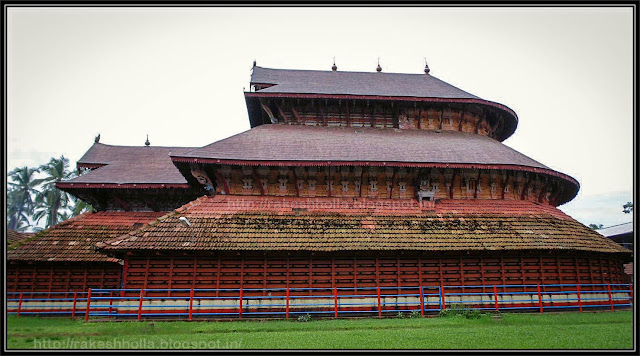 The unique architectural style makes this temple different from other shrine which is noted for its archaeological value. Variety of patterns in temple architecture can be enjoyed here. Madhur Maha Ganapathi Temple is a specimen of rich cultural heritage of the Kasargod region. It is a perfect blend of architecture of Kerala and Karnataka regions. The rich architecture, imposing structure of the temple and the copper plate roofing rises majestically against the beautiful landscape of hills, the place is indeed fascinating. There are abundant paddy fields and gardens with the river Madhuvahini flowing leisurely in front of the temple. The sacred Stream of the temple pond is said to possess spiritual power to cure all diseases. 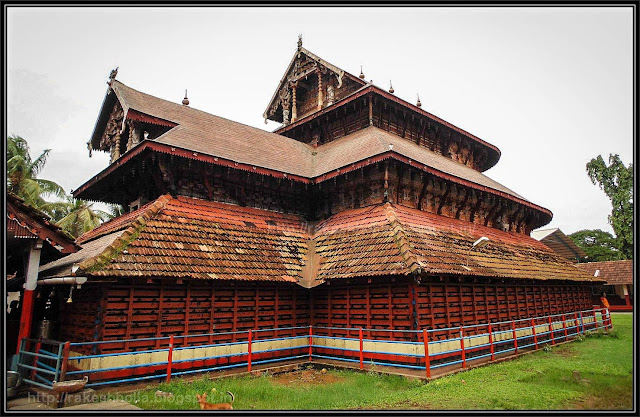 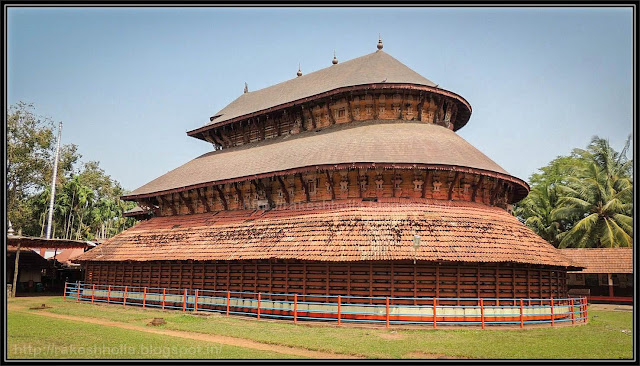 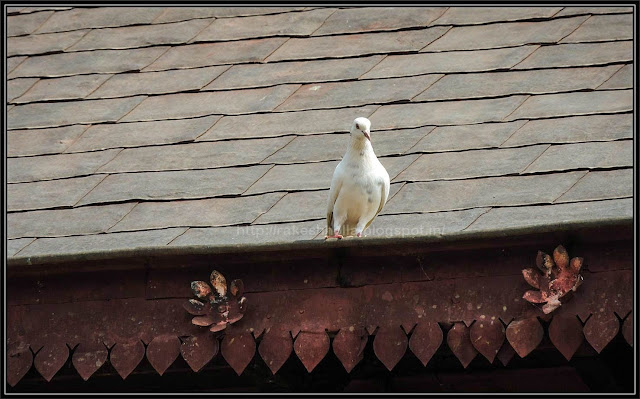 This temple has a huge 3 tired 'Gaja prishta' type Sreekovil. The wood carvings in the temple are marvellous. The carvings depict historic heroes of Mahabharat and Ramayana. These eye-feast carvings are in the ceilings of Namaskara Mandapam of the temple. A closer examination of the wood carvings would disclose the various episodes of the Ramayana, beginning with the Sita Swayamvara. The Mantapa in the interior of the temple building as well as the outside facade of the second and third store of the main building are also profuse with attractive and exquisite wood carvings. Later we headed to Malla and had grace of goddess Durga Paramesvari. 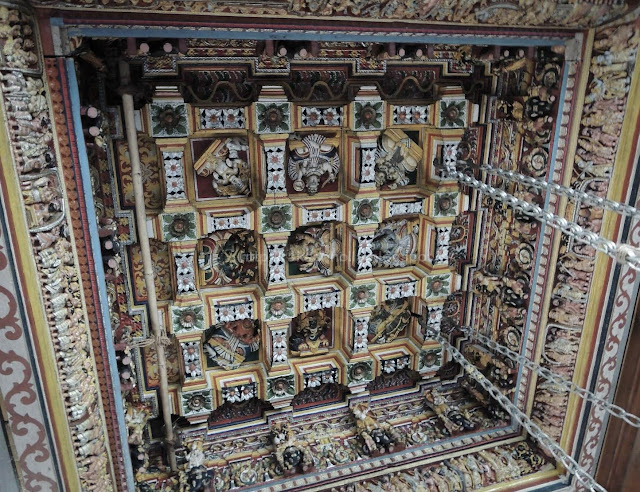 We had delicious lunch at temple we thought it would be a nice idea to hit the beach and have a glimpse of the sun dipping below the horizon, so drove straight to Historic Bekal fort which was some 15km (70kms from Mangalore) from there and on ride the plain roads were gone and we were maneuvering sharp turns. The road was good but the turns were very steep. But my Bike had no problems scaling them with ease. The beauty and scenic view on this route was amazing and we had the road and the beauty all to ourselves. 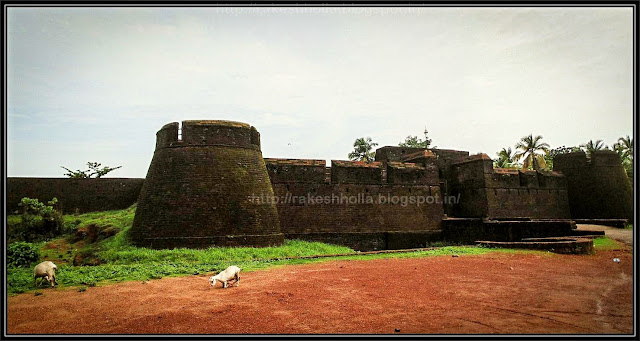 The road was scenic giving glimpses of the sea every now and then. It was evening when I reached Bekal Fort my mind was tired and my legs were tired after this long drive. After reaching the parking area, we had to do a short walk to reach the fort. The fort itself was nothing much, but the views on all four sides were majestic. The construction which dates back to the 1500s is magnificent. Built by Shivappa Naika of Ikkeri dynasty and in 1763 the Mysore ruler Hydarali captured it. This beautiful Fort stands on a hillock jutting into the Arabian Sea & provides breath taking view. 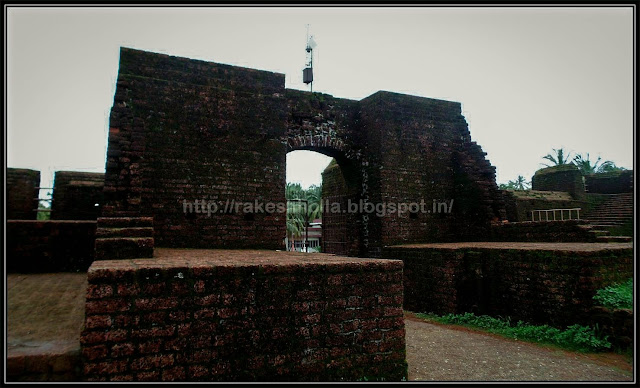 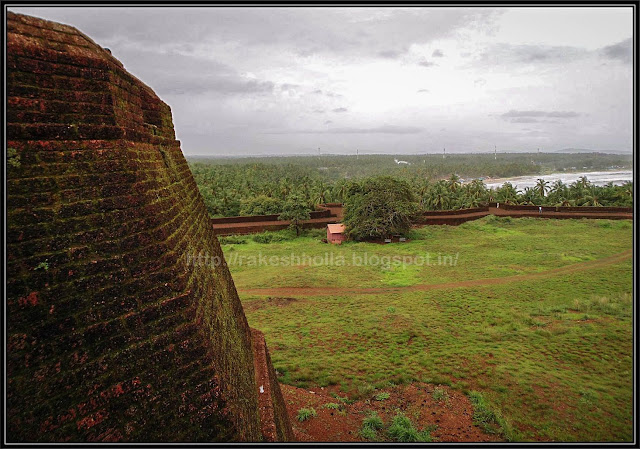 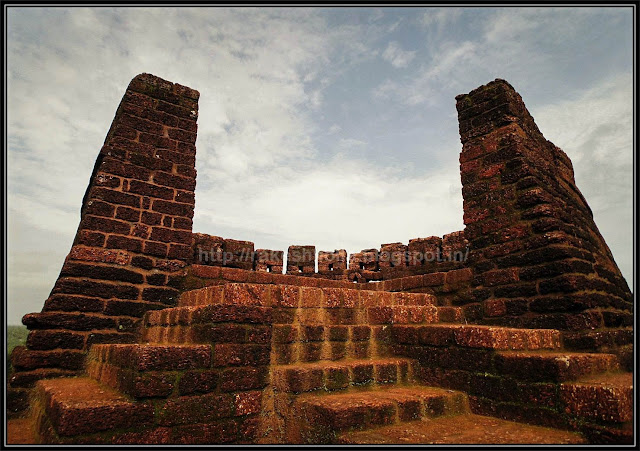 The sight of the Sea and beach from the fort was quiet impressive. The rear end of the fort gives way to an exclusive beach where huge waves lash the walls of the fort. Overall the view of the sea from here was amazing. 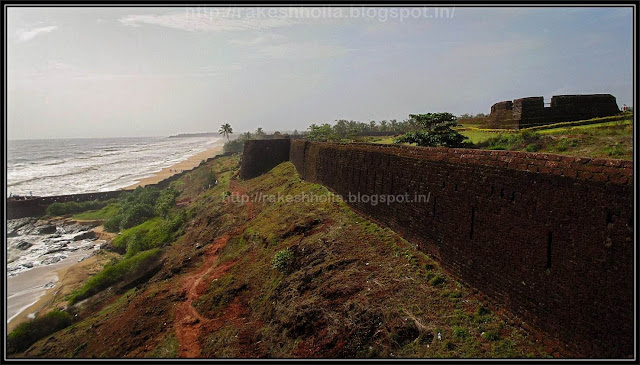 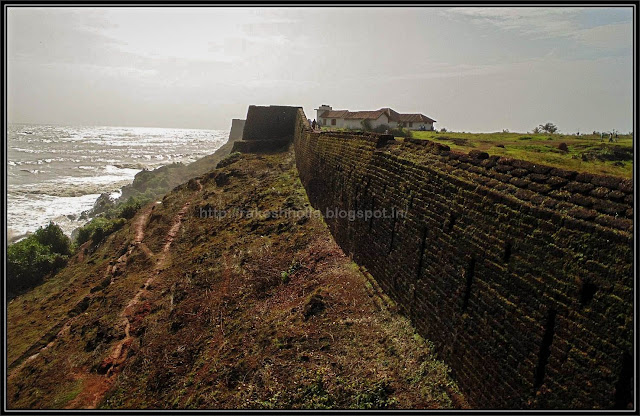 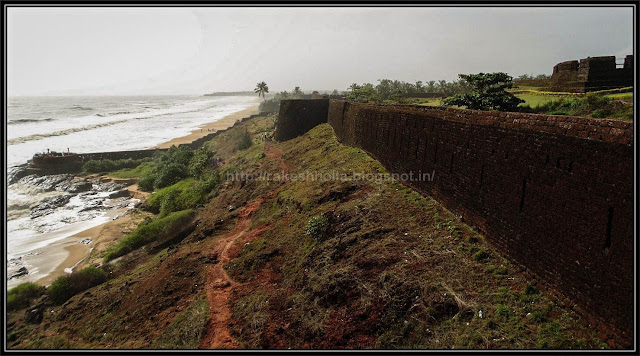 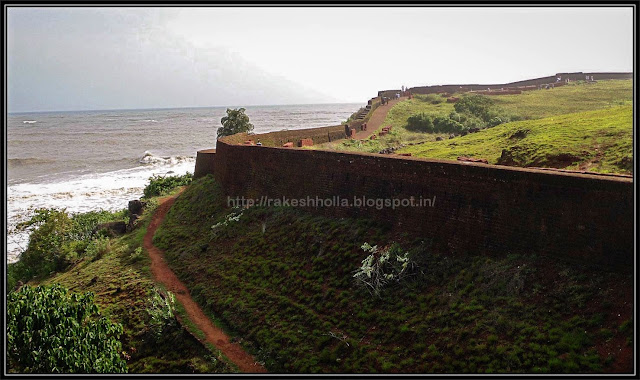 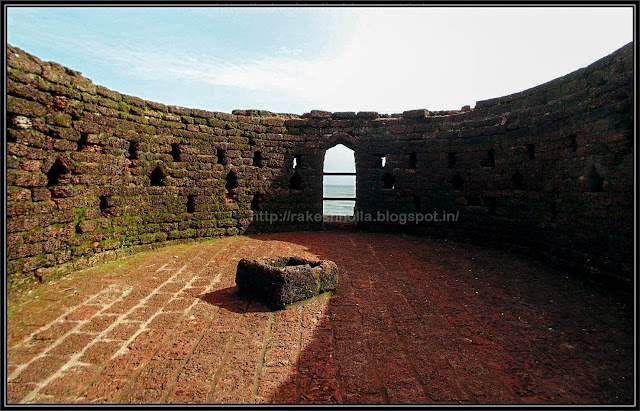 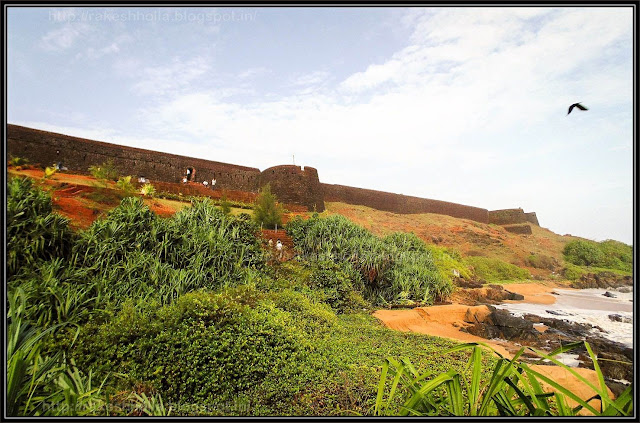 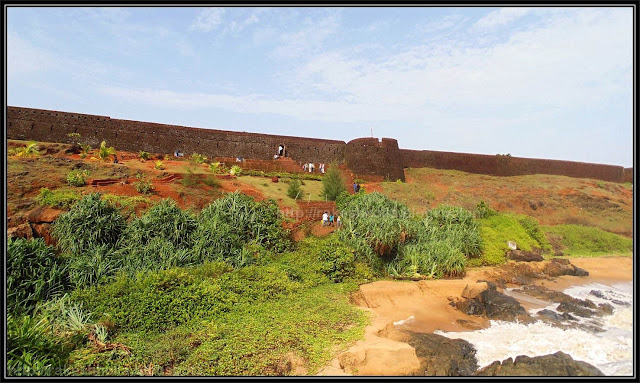 You can feel the power of the ocean hitting the rocks at the beach. The views around and the fort itself was majestic and spread around a vast area on top of the hill. The place was really good and worth seeing at-least once in a life time. I had fun while roaming here and there inside the fort. 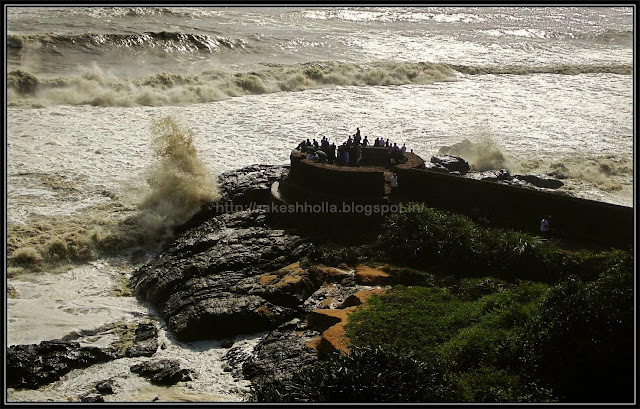 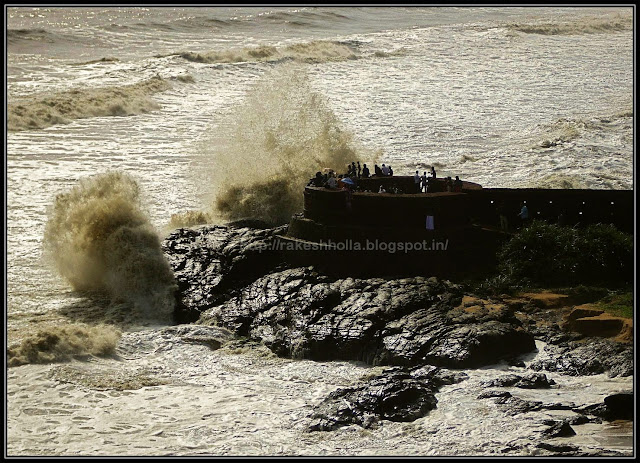 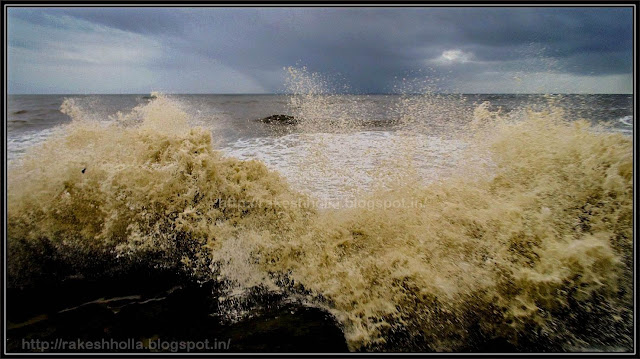 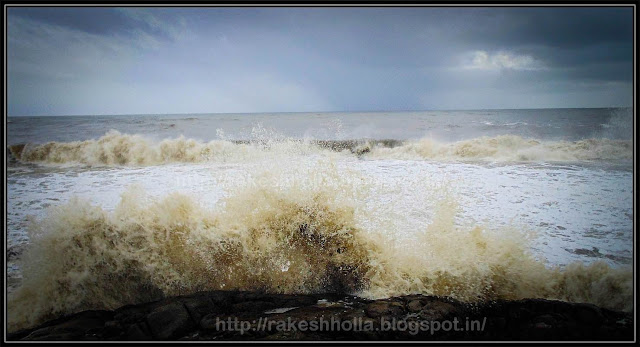 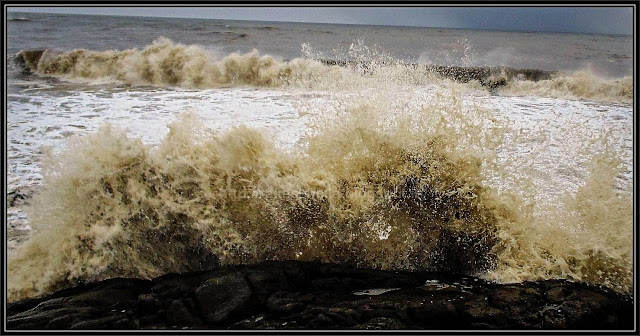 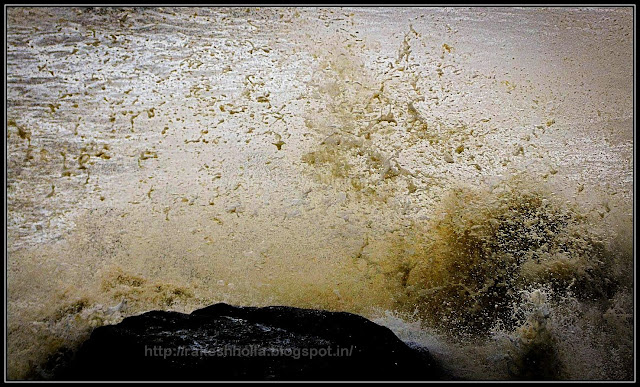 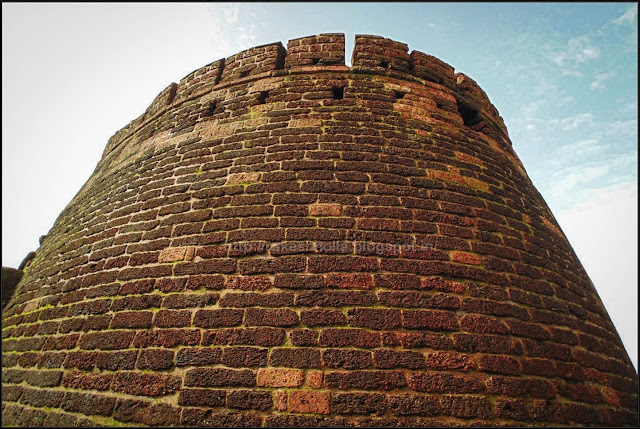 Bekal Fort had gathered attention after one of South India's revered Movie Director had shot a memorable song with his Characters. The view of the Arabian Sea was beautiful from the Fort took some snaps had a long walk all along the rampant of the Fort.  It’s started drizzling first quickly turning in to a steady downpour and the clock kept ticking away to half past five so we decided to pack ourselves and continued the return journey.