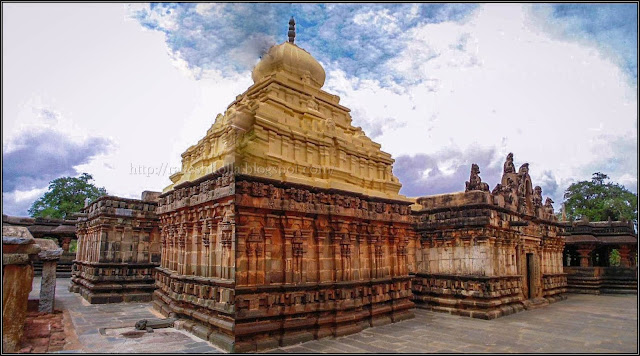 It would be hard to explain and understand that how village which remained a centre of attraction almost for about six centuries lost its glory and went into oblivion. Bagali narrates its story in about 45 odd inscriptions spanning across 6 centuries and 4 great dynasties though at present it has been reduced to a small village. 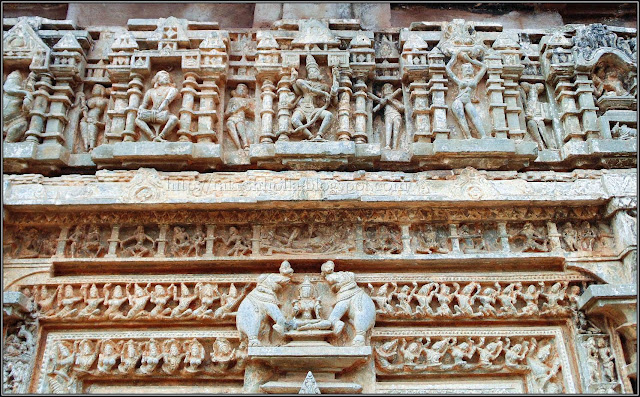 The earliest inscription found here is of the early 9th A.D. pertaing to the times of Rashtrakutas. Later inscriptions are of Chalukyas of Kalyana, Hoysalas and Vijayanagara rulers. Bagali is referred as Balgali during the medieval period was an important Aghrahara right from the times of the Western Chalukyas of Kalyana who were succeeded by the Hoysalas and Vijayanagara. 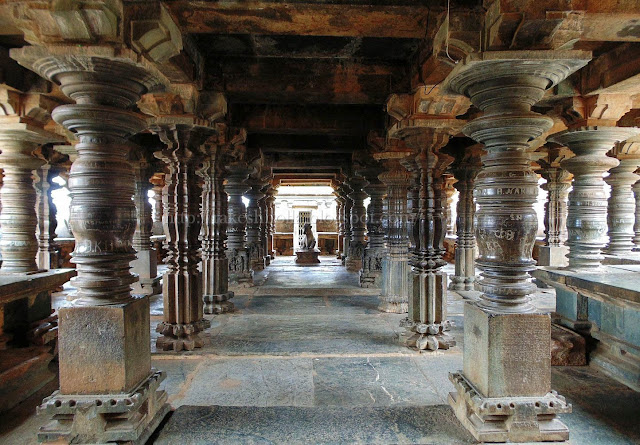 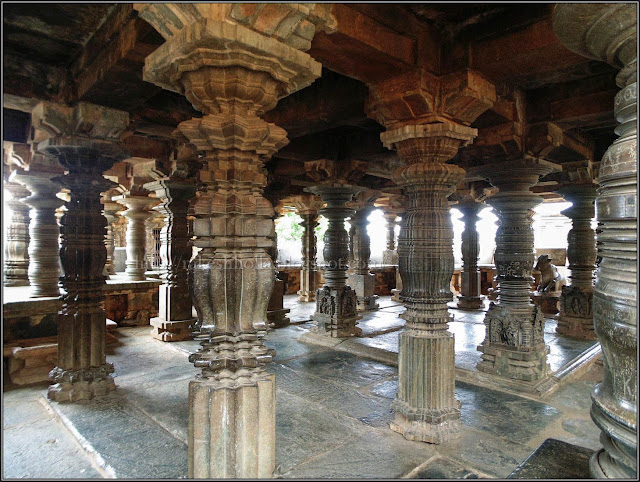 The Kallesvara Temple was constructed during the region of the Western Chalukyan King Ahavamala in 987A.D. and constructed by Duggimayya. As per the Inscription the main deity is known as Kalideva. The east facing temple is constructed close to the embankment of a huge tank of the village Balagi to its north. 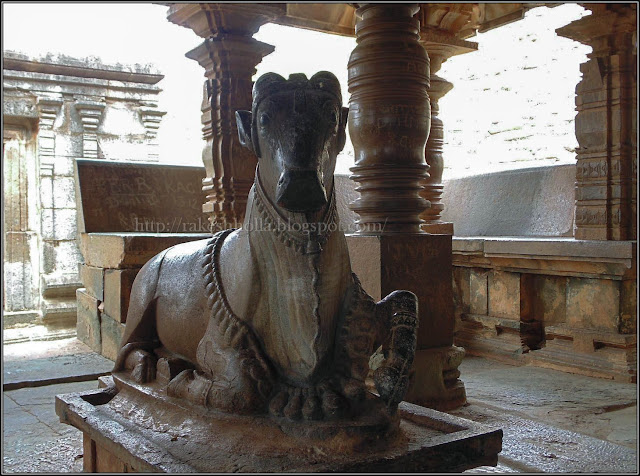 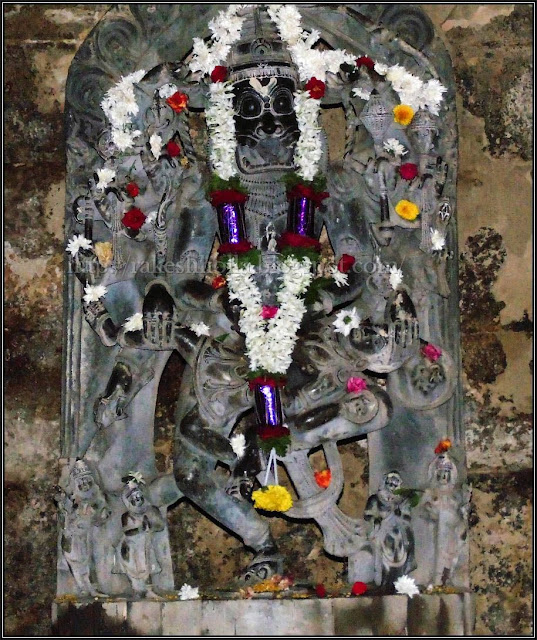 The shrine Surya facing the Shiva were built dedicated to sun god. The face of Surya is most artistic and is commentary on the success of the skill of the sculptor who carved it. The serene expression of the face is remarkable. 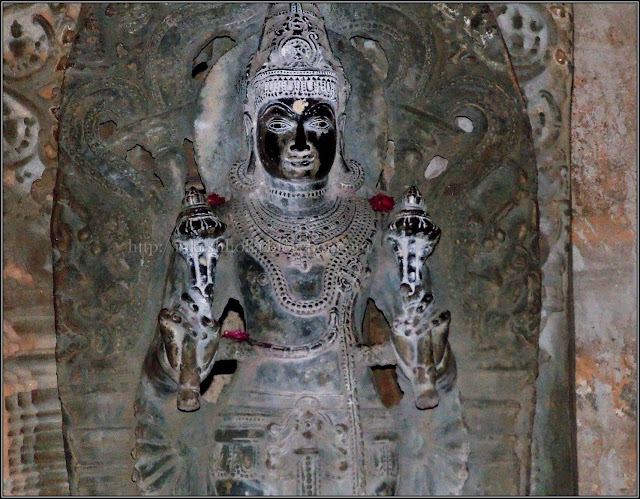 The total effect is one of majesty, grace and dignity and expression his compassion towards the fellow beings and hence is considered as the best in this type much of the drapery on the bust of the image ornamentation comprising jewelry around his neck and chest. 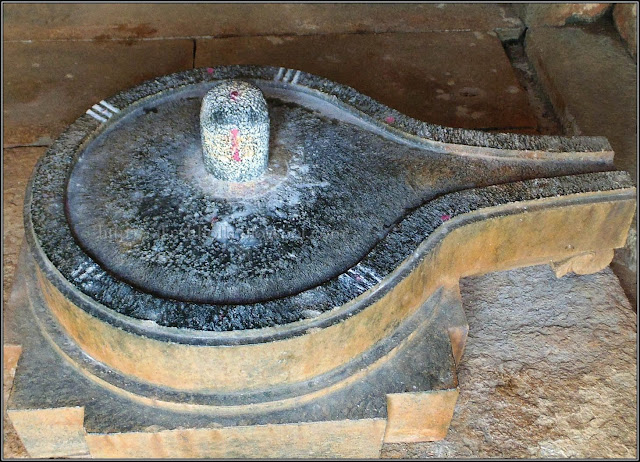 The temple on plan consists of a Garbhagriha, an Antarala, A Mahamandapa with an entrance to the south and east, A huge open Sabhamandapa, A shrine for Surya with an astylar Mukhamandapa built slightly away from the main entrance, all of which are in east west orientation, A shrine of Narasimha with a separate Antarala and passage is added to the north of the Sabhamandapa of the main temple. 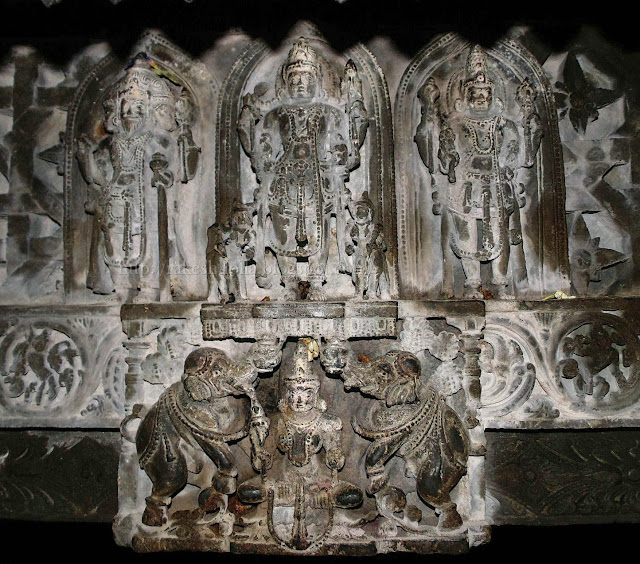 The Sabhamandapa is well known for its fifty four ornate pillars supporting the highly decorated ceiling of these twenty four pillars are located over the Jagati provided with Kakshasana. 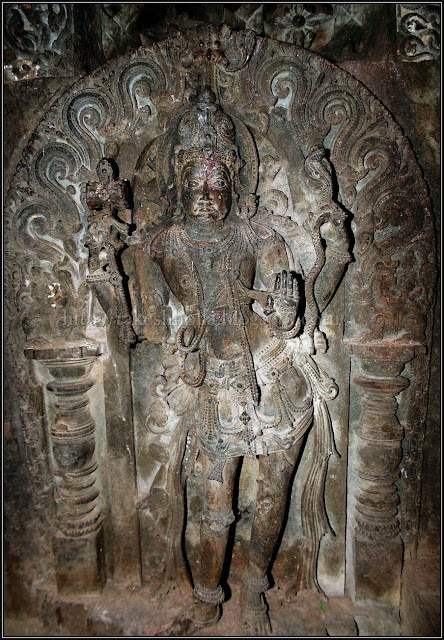 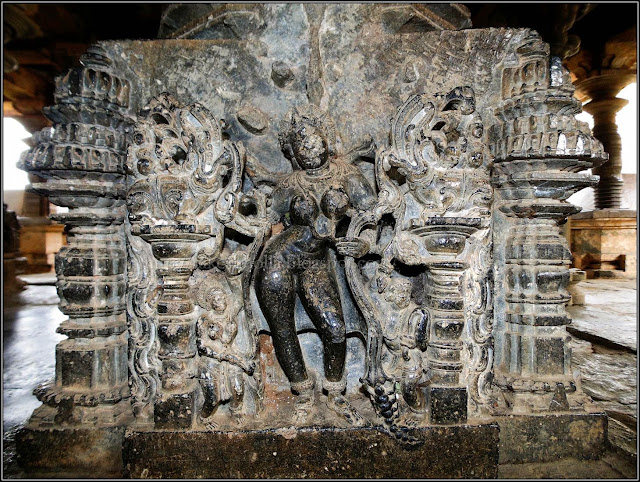 The temple is also known for its intricately carved doorways with multiple door Jambs. The estern end of the Sabhamandapa accommodates an ornate well executed couchant Bull (Nandi). 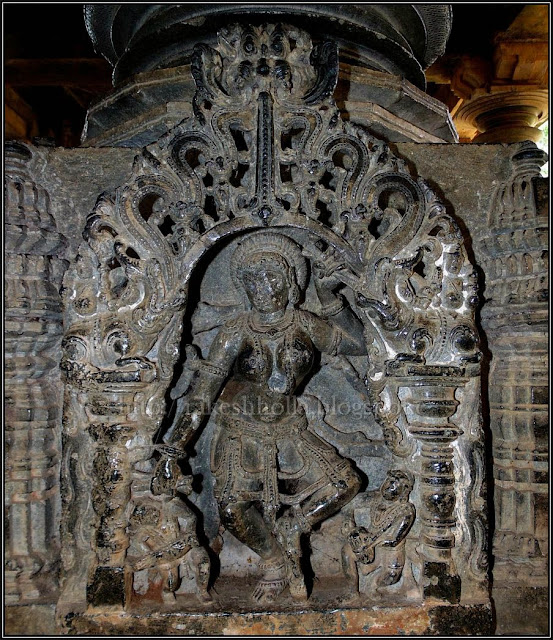 There are eight sub-shrines built around the main temple excellent sculptures of late Chalukyan style are kept in the Mahamandapa of the temple and they includes Shiva, Umamahshvara, Ganesh, Kartikeya, Surya, Anantashayana, Saraswathi and Mahishamardini. 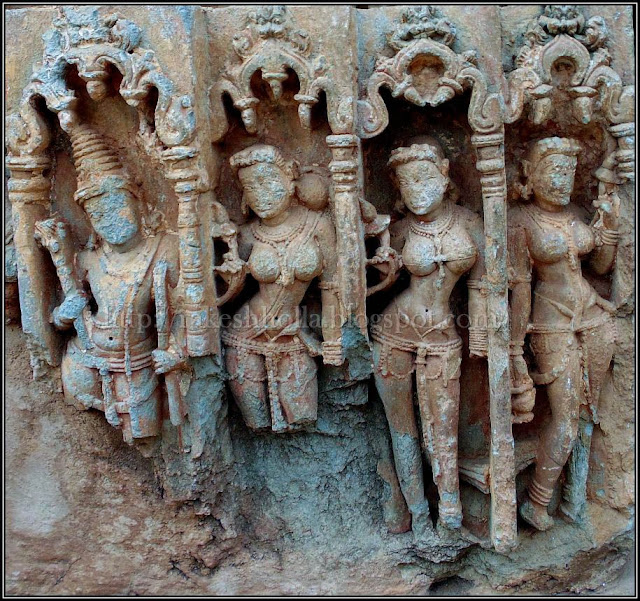 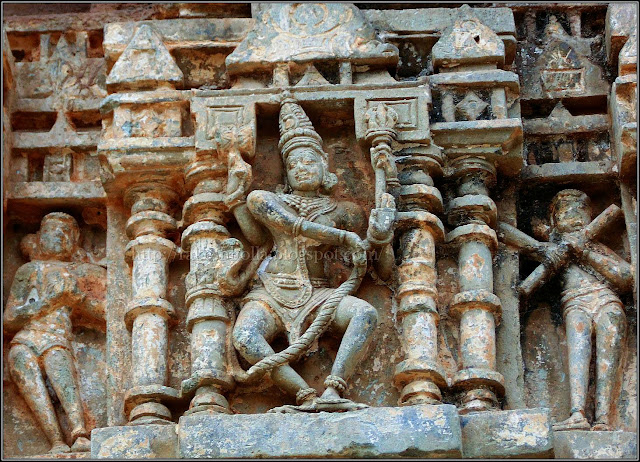 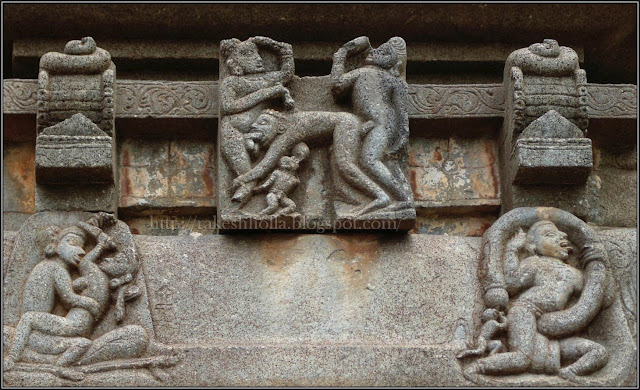 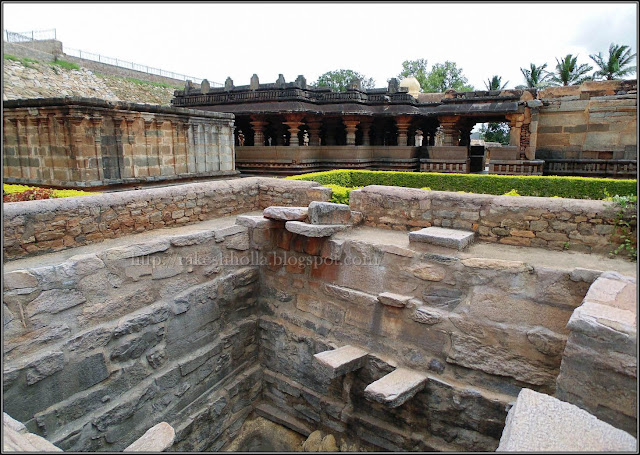 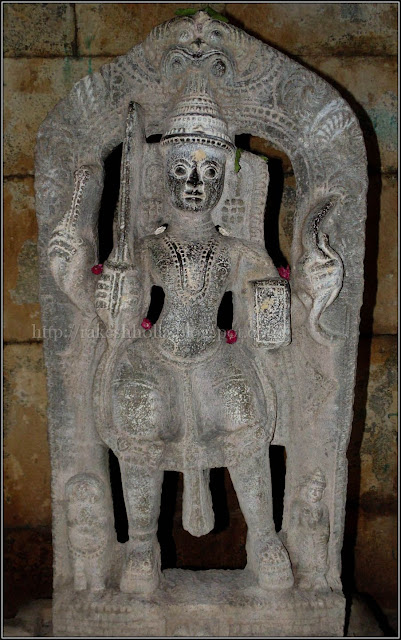 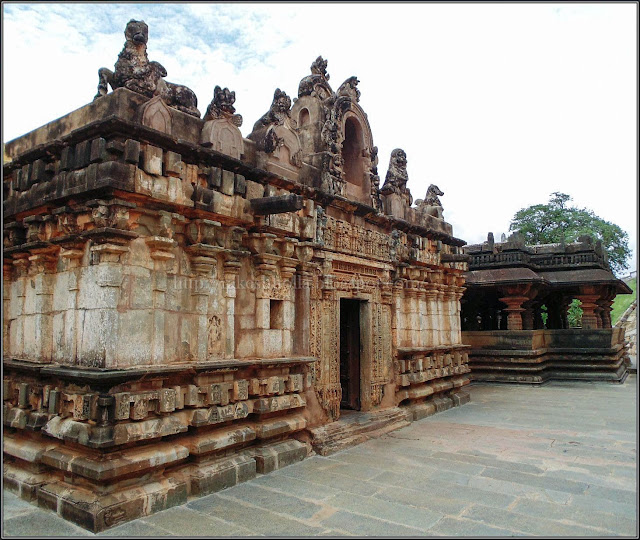 The existing tower over the shrine may be a later day re-construction. The temple, whose premises have yielded 36 old Kannada inscriptions, there are as many as thirty six inscriptions in the temple assignable to the 10th -11th century A.D. which record donations to the Gods Kalideva and Narasimha. 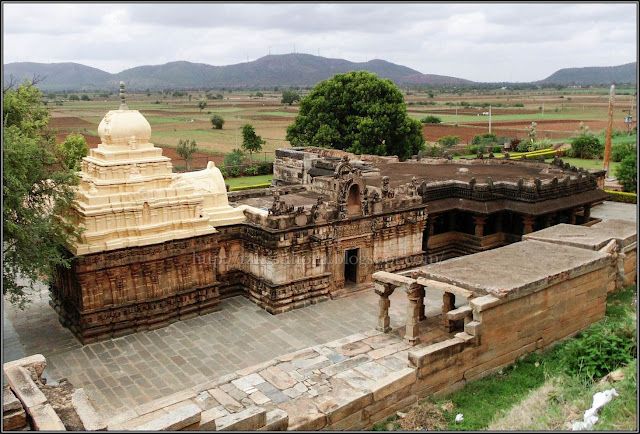