Last week when I visited Hubli on my work, I though not waste my time there. So I contacted my friend Rajesh Naik, he referred me some temples in Hubli. 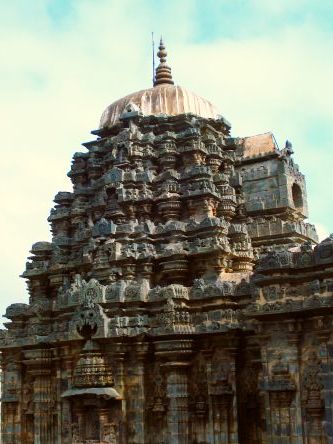 As per his guidance Morning I went to Annigeri village ,its around 37km away from Hubli. First I visited to the 'Amrutheshwari Temple' the black stone temple built by the Western Chalukya Empire which is under the protection of Archeological Department.The temple was originally built in the 10th Century. History of this temple is this famous temple was built by famous architect Jakanacharya. People here says that this temple was built in single night at 10th century.
Front view of Amrutheshwari Temple 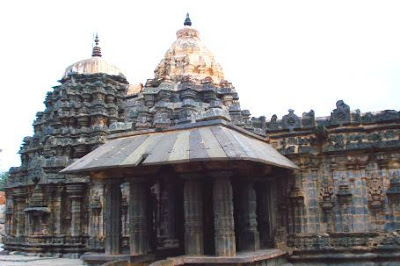 Surrounding of this place I also visited Banashankari Gudi, Uma Bharathi gudi, & Purudeshwara Gudi which I liked most for its beautiful structure. The large and black stone Amrtesvara Temple is the finest examples produced by the Kalyani Chalukya. The temple has a roof supported by 76 pillars and carvings of mythological figures on its walls. 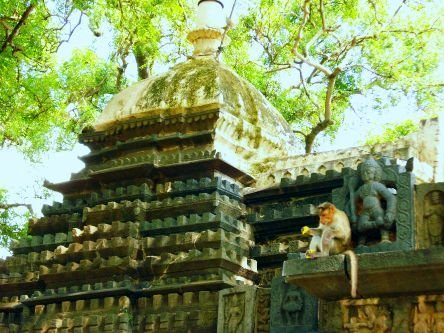 History -In 1157 the Kalachuris under Bijjala II captured Basavakalyan and occupied it for the next twenty years, forcing the Chalukyas to move their capital city to Annigeri in the present-day Dharwad district. To provide education at the primary and Vedic levels, Annigeri had five Brahmapuris. In 2010, over 100 human skulls were found in a drain at Annigeri. According to the preliminary theories, the area may have been a mass grave around some 150-200 years ago, or it may have been a battle ground. After the discovery, the Archaeological Survey of India officials visited the site, and the government of Karnataka ordered an excavation. After the excavation, 471 skulls were found on a stretch of 15.6 meters by 1.7 meters. As of 2011, the archaeologists were searching for any mention of a massacre in the local folklore or history. 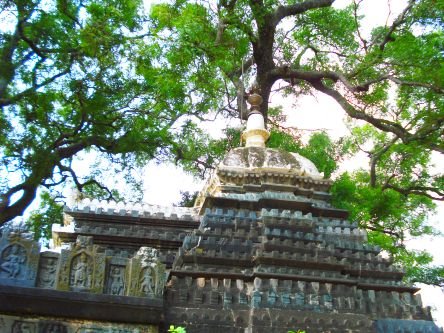 Evening I went Chandramwleswara Temple, located in Unkal Village which is 4km away from Hubli. This Temple is now totally damaged, because of negligence of Archeological Department., After that I returned back with some beautiful memory of Hubli. 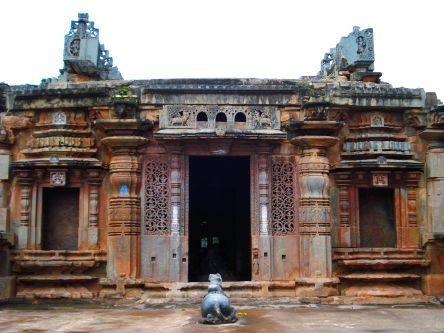 The Chandramouleshwara temple is located in the suburbs of Hubli city, in the Unkal Village. It is a 900 year old Chalukya construction. Inscriptions found in Unkal village date this temple to the 11th or 12th century. This temple has been declared as a protected monument, and is under the administration of the Archaeological Survey of India. But no proper measures have actually been taken to protect and renovate this magnificent temple. The ASI had started to build a compound wall to protect this monument from encroachment and misuse, but the work is just half finished. Kids use the temple premises as a play ground. This historical temple needs urgent action to save it and restore it to its former glory. 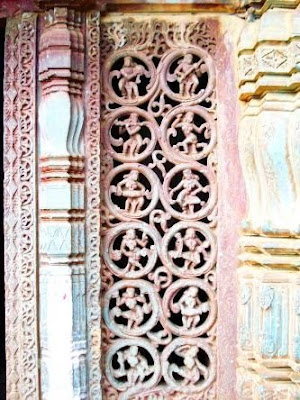 This 900 year old Chalukyan structure is modeled on the monuments found in Aihole, Badami and Pattadakal, the ancient cradles of South Indian Temple Architecture. This temple is dedicated to Chandramouleshwara, another name for Lord Shiva. It houses two Shiva Lingas. One Shiva Linga is enclosed in a shrine which has four entrances in four directions. 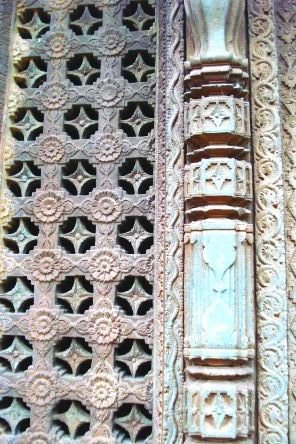 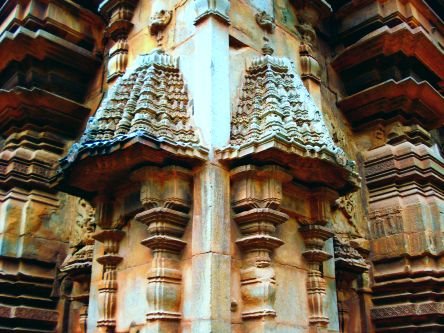 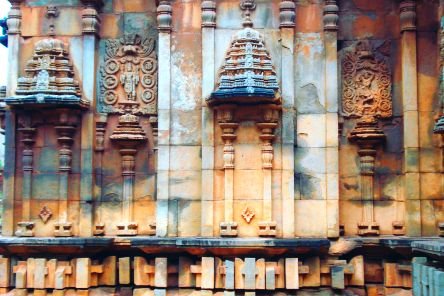 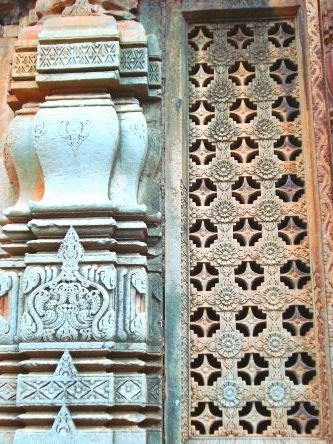 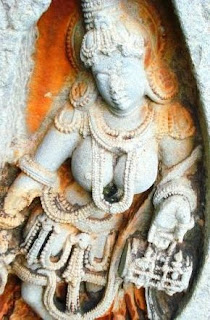 This is the main shrine of Chandramouleshwara. The other shrine is known as Chaturmukha Lings, the four faced lings. Pujas are still performed everyday in the temple. The temple has pillars built of black granite. The walls and pillars are well decorated with sculptures. The figure of Dancing Ganesha is captivating. The temple walls, pillars and pilasters are covered in lovely carvings. This temple is a fine example of Chalukyan temple architecture. 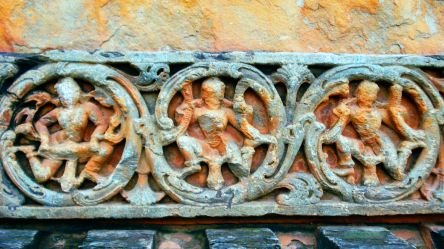 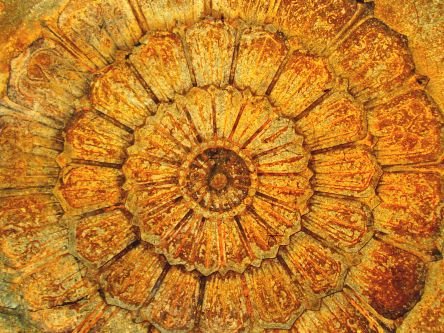 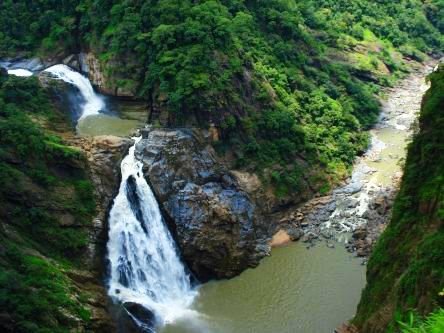 I went to see Magod waterfalls with my Sirsi friend on 31-08-08, After a one hour hard bike ride our bike damaged we thought to cancel our program, later we changed our mind thinking that already near to the falls so went to Magod falls. 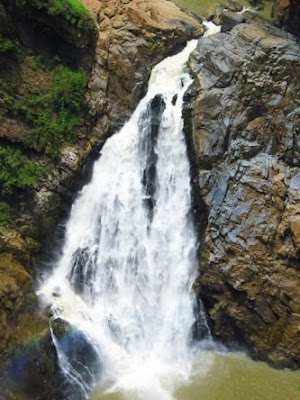 Magod falls has two steps which in very beautiful in green valley. We tried to go to bottom of the falls, but my friend tired & patched so we went back. 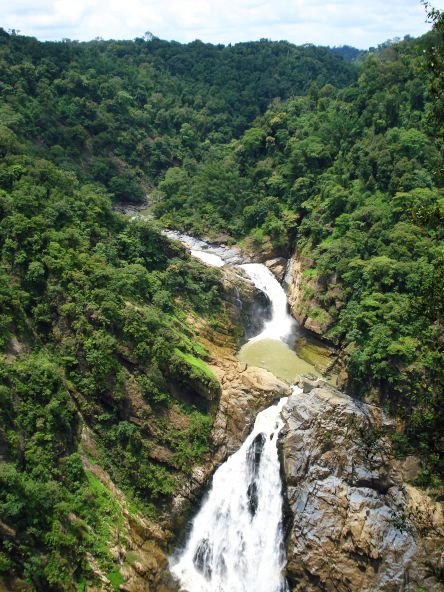 Opposite of this falls we saw Majjige Hole Falls, very long view from this place & near this falls a very famous beautiful view point of Jenakallu gudda which is 5 km away from this spot. 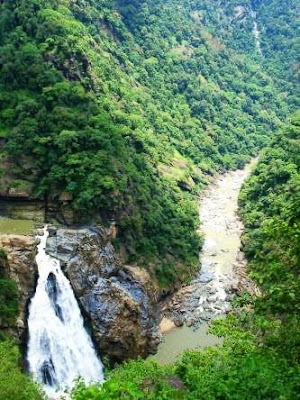 We come back & had our dinner in Yellapur, and postponed our plan to visit Sathodi falls as our bike damaged. In our way to Sirsi we also find another famous Sahasra Linga Kshetra, which is covered by river after a very hard rain. 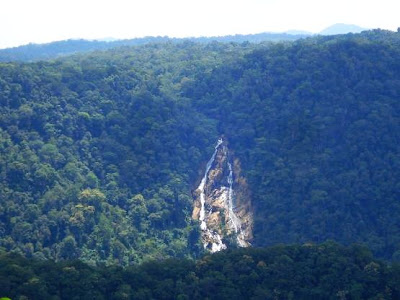 Majjigehole waterfalls
Posted by Unknown at 6:46:00 PM 6 comments: Links to this post